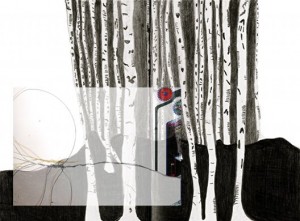 An exhibition by Kathy O’Leary at the Working Artists Studio Gallery in Skibbereen will open at 3pm on Saturday 15th of September. The work is centered on an artist’s journal/notebook which is exhibited in the gallery, along with elements of it that have been manipulated and reprinted for display within the space. The following details are from Dnote:

Kathy O’Leary has been hugely influenced by books throughout her life and she continues to use this influence. After launching her book Onward Journeys, A Visual Process in early 2012, she began an artist’s notebook / journal. Here began another journey of sorts with her concern for creating art that surrounds rituals of the everyday and the importance of this is evident in this body of work. Recording a ‘time and place’ has been a documentary process for her in the last few years.

The notebook will form part of the exhibition but has also been manipulated and reprinted to form a part of the gallery, playing with the book format and bringing the imagery out into the space.

The body and the landscape is a continual cohesive language in her practice and she develops this juxtaposition by utilisng different disciplines.

This exhibition endeavors to elaborate on some of the research Kathy has gained throughout the development and use of these processes. By examining trajectories of the chaos theory and cosmology through the body, nature, the environment and technology creating transformations with ephemeral and ethereal forms.

Kathy has created playful curiosities by speculating concepts and accumulating fragments of history and representation as a way of exploring correlations between ‘play’ and artistic practice to interpret this through a visual language. The majority of her practice has been strongly based in the Aesthetics of the body and the environment. She’s intrigued by the term ‘ecofeminism’ but purely as a critique that draws parallels between the subjugation of humanity and nature. But to also have the need to give humanity credit to being carers of the environment as a necessary role, so that everyone is playing their part as protectors. She supports the concept of ‘deep ecology’ as a contemporary ecological philosophy that recognizes an inherent worth of all living beings, regardless of their abilities/disabilities, strengths or weaknesses.