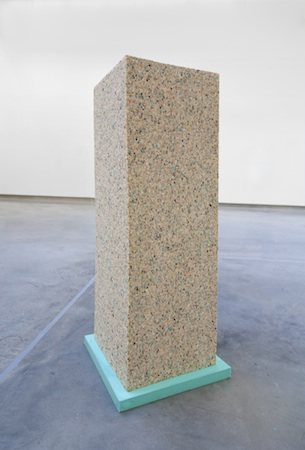 Plastic Art sees the commissioning of new work by artists Barbara Knezevic, Magnhild Opdøl and Séamus McCormack. Curated by Dr. Hilary Murray, the exhibition explores the notion of the biological network in art through the manipulation of form, seriality and the interplay of physical change with recognition.

The synapse forms the primary interface for the most complex of systems—the brain. Loaded with membrane proteins that form dynamic channels, this interface is in constant motion: the primary function being the transfer of information. The plastic neuronal network has opened up endless possibilities for perception, learning and memory: a system that has been mimicked in the mechanical age in the shape of the computer. Along with the advancement in biological systems, parallel functions are being mooted in a host of differing applications, most recently in the arts. The biological cell and its endless capabilities continue to be referenced in contemporary art today, particularly post-minimalist sculpture.

Plasticity proposes the changing of the singular into complexity; it also represents the consolidation of what we take from the world around us and how we temper the complex arrays of information into cogent thought. A work of art is no longer considered a static singularity; it holds within it a complexity akin to the personae of both artist and viewer alike. The artists featured in Plastic Art have used the way in which plasticity can change an object from a non-emotive idiom into a focus module for memory and emotion.

ARBOR
September 21st–October 13th
At a certain juncture during Plastic Art certain work will be re-addressed in light of the current display and how it is received. This delicate adaptation of the work will be referred to as an ‘arbor’ or branching. By adapting the work in this manner the artist is allowing the work to respond to the environment and those that come in contact with it.

Plastic Art is curated by Dr. Hilary Murray and features the work of Magnhild Opdøl, Séamus McCormack and Barbara Knezevic.

Born in Norway, Magnhild Opdøl lives and works in Dublin where she is currently on a residency in Fire Station Artists’ Studios. Since graduating from the National College of Art and Design, with an MFA in 2007 she has been widely exhibited both in Ireland and internationally. Opdøls’ work is in many public and private collections. Most recent solo exhibitions include Dead Dog Farm, Galway Arts Centre, Ireland, Then Comes the Lies, Molde Kunstforening, Norway in 2011 and If you go down to the woods, Kunstmuseet KUBE, Ålesund, Norway (until 2 September 2012). Upcoming solo shows include Tegnerforbundet, Oslo later in 2012 and Butler Gallery, Kilkenny, Ireland, Haugesund Billedgalleri and Akershus Kunstsenter, Norway in 2013. www.magnhildopdol.com

Born in Mullingar, Co. Westmeath Séamus Mc Cormack was educated at the Dublin Institute of Technology in 2006 with a first class honours degree in Fine Art and was awarded the Gold Medal for Academic Excellence. He has just recently completed an MFA in Sculpture at the National College of Art & Design, Dublin. Solo exhibitions include Ballina Arts Centre, 2010. Group shows include Catalyst Arts, Belfast; Éigse, Carlow; Tulca, Galway; Broadstone Dublin; Galway Arts Centre; TACTIC, Cork and Basic Space, Dublin. In 2010 he was one of the award winners at the Claremorris Open Exhibition, curated by Lisa Le Feuvre. He has received a number of grants from the Westmeath County Council Arts Office and in 2006 received the Emerging Artist Bursary Award. www.seamusmccormack.com

Plastic Art is made possible with support from the Dublin Year of Science 2012 Euroscience
Open Forum (ESOF).