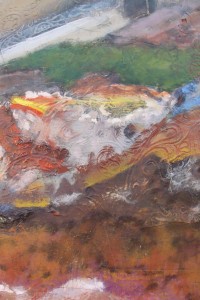 Roisin Power Hackett reviews Anthony Hackett’s exhibition Beyond Boarders, which took place in The Back Loft on the 12th and 13th of October 2012.

This review could be seen as some sort of twisted nepotism. The artist, Anthony Hackett, is my uncle and the gallery, The Back Loft, is one I’m currently volunteering for (or collaborating with). Anthony Hackett was the person who inspired me to become an artist, or to go to Art College at least. When I was three years old he once babysat my little brother and I. To pass the time he got us to paint, using poster paints, red yellow and blue. He got me to put my bare feet into the paint and walk on green and white striped rolls of computer paper that my dad had. This is one of my most vivid childhood memories because it started my love affair with the visceral squelchy colourful medium of paint. Perhaps I do owe him a good review …

Anthony has a BA in Fine Art from DIT and has been working as a tutor in Fine Art at Ballyfermot. He has been painting on an off for the past number of years. This exhibition has given him focus. The last time I remember him having an exhibition, I was in my early teens, but again that’s just my memory. His paintings certainly use that visceral quality of the medium, and for him it is all about process.

The subject matter and images arrive from my subconscious, through my pushing, playing, removing and scratching of the paint.
Hackett, Anthony, (2012), ‘The Back Loft Events’, Artist’s Statement, http://thebackloft.blogspot.ie/2012_09_01_archive.html 15/10/2012

The images come by chance. In this respect the artist’s intentions can be seen in his work – his people, his landscapes, buildings and animals are all very evidently formed by chance. This can be seen in Dumped , a painting of a fish which looks like a painting trembling on the edge of abstraction. In On Discovering Echinoids, the cliffs or the rocks (in Anthony’s paintings one can never be quite sure of the perspective – whether you the viewer are a giant or a fairy) shape the person’s face. The figures in his paintings are unashamedly simple brush strokes – his paintings follow an Irish tradition of expressionist painting, including the work of Jack B Yeats, Camille Souter and Brian Maguire. His work without a doubt is different to the work of these artists, but also similar – it is the brush stroke, the gesture. This is where Anthony’s paintings fit in to something.

Narrative is a big component of Anthony’s work. His paints, scratched and rubbed onto his ground, tell a story. This for me is the most dynamic thing about his work because narrative, even though it is currently making a come-back in art, has been seen as old fashioned, as old as the bible. Even now in our post Post-modern world Clement Greenberg’s ideas are cemented into art. Greenberg believed that the ‘use of characteristic methods of a discipline to criticize the discipline itself’1 was the way art had to be. His view was that you don’t mix storytelling and paint. They are two separate mediums with separate characteristics. Hybrid art wasn’t an option. Since then literariness in painting has been looked down upon by the art world. However, it never really went away, as it was there in the fifties with Cy Twombly’s abstract expressionism. Anthony’s art is based on storytelling; his paintings talk about political issues, social justice, the environment and personal memories.

On a trip to the beach at Rosses Point Sligo, Anthony noticed unusual spherical objects similar to shells, which he’d never seen before. They were fragile things, which could be easily crushed into a thousand pieces in your hands. These objects he later discovered were Echinoids, the fossils of sea urchins. From this story comes his painting On Discovering Echinoids. This reminds me of the time I discovered echinoids. This was also at Rosses Point and I remember how the fossil crumbled in my coat pocket. At the time, I was very happy, and head over heels in love… Narratives in paintings conjure images in peoples’ minds, evoke memories. Narrative art is a jumping off point, allowing for a continuation of a story by the viewer, for a coincidence to occur. ‘As soon as a fact is narrated … finally outside of any function other than that of the very practice of the symbol itself, this disconnection occurs, the voice loses its origin, the author enters into his own death’2 and the painting is given over to the viewer.

Whether Anthony agrees with my speculation on his paintings or not, it doesn’t matter. As author/artist he has no control over his work. His art has now entered the public sphere.

Roisin Power Hackett has recently graduated from the National College of Art and Design and is currently doing the MA Art in the Contemporary World at the same college. She has published a literary magazine in NCAD known as ‘The Kite’ and has an art blog at http://roisinphackett.wordpress.com/.