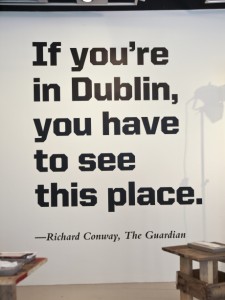 Basic Space, the Dublin-based creative space, are looking for artist applications for the opportunity of using a space in IMMA for a short period. The following information is taken from their press release:

Basic Space have taken residency in a studio in IMMA’s site at the Royal Hospital Kilmainham from November 2012 until February 2013. We are now accepting submissions from artists who wish to use the space on a short term basis for the broadcast and dissemination of a series of works. For this project we are interested in works which define their own space, which do not rely on traditional art display spaces to be viewed.We hope to provide for the production of work which does not have
to engage with a specifically intimidating physical space, but which also cannot rely on the apparent neutrality of a traditional white cube gallery.

At present we envision producing works which could be distributed through the increasingly disused airspace of analogue television and radio, as well as through the internet and print media. Works produced in this space need not necessarily use one or other of these formats but they must be capable of being exhibited or experienced upon terms dictated by their own materiality and of arriving at audiences who need not converge on a specific lo- cation. The aim is to facilitate and create an exciting and challenging body of work which does not require even an impromptu, impermanent or ‘pop-up’ physical location in order to be exhibited.

Please send applications of no more than one A4 page in .doc format accompanied by three images of previous or proposed work to basicspacedublin@gmail.com. If possible applicants should state when they wish to take up residency. Basic Space will review applications and inform applicants of whether they have been accepted as soon as possible.