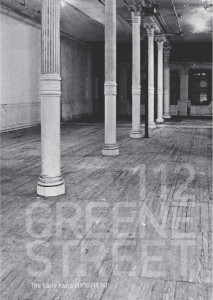 The talk, hosted by MA Art in the Contemporary World, will discuss the new book written by Fiore. The following is taken from her website:

112 Greene Street was one of New York’s first alternative, artist-run venues. Started in October 1970 by Jeffrey Lew, Gordon Matta-Clark and Alan Saret, among others, the building became a focal point for a young generation of artists seeking a substitute to New York’s established gallery circuit. In the spirit of the 1970s desire for experimentation, the space was open to artists from all disciplines and did not impose censorship over their shows. As such, the building provided the setting for a rare, singular moment of artistic ingenuity, invention, and freedom that was at its peak between 1970 and 1974.

112 Greene Street: The Early Years (1970–1974) is the culmination of an exhibition by the same name that opened at David Zwirner in January 2011 curated by (MA ACW Alumni) Jessamyn Fiore. This extensively researched and historically important book brings together a number of works exhibited at 112 Greene Street (including works by Matta-Clark, Vito Acconci, Tina Girouard, Suzanne Harris, Jene Highstein, Larry Miller, Alan Saret, and Richard Serra), as well as extensive interviews with many of the artists involved in the space, a fascinating timeline of all the activity at 112 Greene Street in the early years, and installation views of the 2011 exhibition. The text, timeline, and interviews in the book have been prepared by Jessamyn Fiore.

Jessamyn Fiore was raised in the New York City art world and attended Sarah Lawrence College where she studied playwriting. After graduating she moved to Ireland and founded The Road Show Theatre for which she wrote several productions. Her plays have been produced in Galway, Dublin, London, Edinburgh, Prague, and New York City. In 2007 she became co-director of Thisisnotashop Gallery in Dublin Ireland, and in 2009 became the sole director. Working with Aideen Darcy to curate the overall gallery program, she has also curated four major exhibitions for the gallery- Gordon Matta-Clark FOOD (DEC 2007), Fluxus with Larry Miller (MAY 2009) and two Thisisnotashop group exhibitions for No Soul For Sale: A Festival of Independents held at X-Initiative in New York City (June 2009) and the TATE Modern in London (May 2010). She founded The Writing Workshop with Jessica Foley in Dublin in 2007, a collaborative forum for writers and artists who work with text. She assists her mother Jane Crawford, Gordon Matta-Clark’s widow, in the management of the Estate of Gordon Matta-Clark. Fiore completed an MA in Art in the Contemporary World at the National College of Art & Design, Dublin, Ireland in 2009. www.jessamynfiore.com