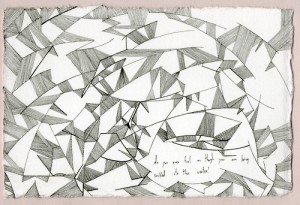 Don’t worry. This is how life is supposed to be.
Liam Gough

Movement is the genesis of Liam Gough’s art practice. On visiting his studio at NCAD, John’s Lane, Liam told me a story about a recent day in the studios. He was sitting drinking his morning cup of jasmine tea when all of a sudden he felt the impulse to get up from his chair and walk out the escape exit doors of his studio. So he did this. He found himself outside. A woman from across the road was staring at him out a window. Liam then realised she wasn’t staring at him. She was staring at another door into the John’s Lane Building. Liam decided then to go through this door. He found himself by the stair case. Since he had never been up on top of the roof of building he resolved to see how high the stairs would take him. When he reached the top, he came out onto a roof balcony. On the ledge of the balcony he found two half smoked cigarettes. He took these with him down the stairs again. The story then continues with a walk down to the Liffey, where Liam smoked another cigarette. On his way back up from the Liffey to John’s Lane he found a dead bumble bee, which he took with him. After telling me this story he then gestured to his studio wall where there were two drawings of the same bumble bee, and both cigarettes were pinned up. Walking is how Liam forages for the subjects of his art.

Liam Gough is an NCAD Fine Art Print 2012 graduate. He is currently in his first year of his Masters in Fine Art in the same college. I became aware of Liam’s practice about midway through his final year, when one day I went up to the print studios to see his work. His practice mainly involves fine black ink pen line drawings on thick white paper. The placement of how the ink drawings get situated on the page is of vital importance to Liam. He likes the drawn object (or objects) to be balanced on the page. His drawings are controlled, drawn to scale, purposely put on the page the way they are. He sees the work on the page before he draws it, he looks at the objects (for hours sometimes) and sees how he’s going to draw it before he puts pen to paper. Only the necessary amount of lines needed are drawn on the page in order for the drawing to appear like the object. Liam said that this is hard to do and often amounts to failure. His drawings are made on a domestic scale so they
can be bought.

He first began this practice of walking and drawing in Berlin in the summer of 2011. The things he chooses to collect are usually other peoples’ discarded objects. These include cigarette butts, matches, used matches, match stick boxes, beer bottle caps and ring pulls. Sometimes he finds more interesting objects and has in his collection a pair of Barbie doll hands chopped from the dolls body. These objects are relics of the moment for Liam. He likes the sentimentality of other peoples’ abandoned objects. When I visited his studio, he asked me, did I believe in destiny? Before I could answer, he said, he didn’t really, but he used it to find things. If he felt the impulse to leave his jasmine tea and go for a walk, or when walking down the street to cross to the other side, he’d just do it, because he would feel it was his destiny. It is obvious then, that discarded objects have significance for Liam that they may not have for others. I commend him on his slight obsession.

Another part of Liam’s work which attracted me from the beginning was his use of handwritten text on his drawings. It is an ongoing part of his practice to write notes and stick them up on his studio wall or write things in places around Dublin. As part of his graduate show last year he displayed many little notebooks. These notebooks included sketches and text (poems and written observations). He told me he has a fascination with the way the word ‘nothing’ looks, when it’s written on a page. In October-November 2012 Liam hand printed a magazine/artist book of his drawings called ‘Nothing’ on legal document paper and distributed them in various places around Dublin. Liam’s use of Dublin city as a gallery space or testing ground for the textual aspect of his work is intriguing. Some of the work he does is graffiti-like. It is an inconspicuous type of graffiti he puts around Dublin city. He writes phrases like,

‘There is Nothing Here for you’,
‘Can I buy you a drink?’ and
‘Don’t worry. This is how life is supposed to be’

These are almost morose statements and questions, which seem to fit with Liam’s visual style of slight sparseness. He told me he likes art that you can miss because it is so small. This is the essential thing about Liam’s art, particularly his Dublin city art (the graffiti and the magazine), you could miss it. You do miss it. Once you see it though, you won’t forget it. Since Liam began his MFA, he has developed a new series of abstract pen on paper drawings. These drawings, he told me, enable him to have his walking and object-finding practice. For these abstract drawings he doesn’t need objects. These are diagrams of the process of creativity. What I got from the drawings was that they are curves and straight lines that consequently develop into shapes. They are diagrams of the direction of creativity. The concept of these drawings is so abstract there is a difficulty in translating them into words. Liam makes these drawings regularly in order to put himself into a creative mind set.

As regards influences on his work. On the desk in his studio are piles of books and an assortment of his collected objects. He said musicians and writers influence him most. He named one artist, Nedko Solakov, whose approach he likes. Subsequently to my visit to his studio, he has sent me a long list of artists who interest him. With respect to his initial response to my question, “what visual artists do you like/do you think influence you?”, Solakov was the only one he could come up with. For me, his answer was interesting, as it is the way I would answer the question myself. I would find it difficult to pin down the visual artists that influence my work. Liam’s first word relating to his influences was ‘Poe’, as in Edgar Allan. This is the kind of answer I like. Some quaint nineteenth century writer influences twenty-first century drawings. The artworks Liam showed me have no direct link to Poe. However there are traces of Poe in Liam’s work if you think about it. Poe has:

Liam has ‘Nothingness’. This morose nothingness pervades Liam’s work through the vast empty white spaces in his drawings. It also enters his work through the submissive quality of the phrases he writes like, ‘And In Comes the Devil to wash the whole world down’. He submits to the impending half-gloom of everyday life. At the same time, if you were sad one evening, and you saw ‘And In Comes the Devil…’ you might actually perk up. You are not the only one to feel sometimes like the world washes down. There is an everyday, neither positive nor negative sensibility to Liam’s art. His drawings and writings are reassuring. His collection of objects is humble.

Finally in such an essay as this, the precise crispness of Liam’s black pen line drawings should be noted. Take for example his abstract drawing, which has written on it, ‘do you ever feel as though you were being sucked into a vortex’, the lines in this are so controlled, almost too perfect, or obsessive. They have been planned to be that way by Liam. He told me there is a tiny margin for error in his drawings, but if they don’t look right, he starts again. It is this precision of pen on paper that makes me relate Liam’s drawings to the drawings of Harry Clarke. Clarke made drawings for Poe’s ‘Tales of Mystery and Imagination’ and though these are much darker than Liam’s drawings, there is a connection, perhaps a tenuous one, to be made between Liam and Clarke. However there is a reassuring, humble, everydayness to the beauty in Liam’s work, which isn’t in Clarke’s. However it is the slight connection between their artwork which made me attracted to Liam’s drawings in the first place.

Liam Gough will have his first year MFA exhibition in the Complex in Smithfield, opening on the 2nd of May and running until the 10th. For more information about the artist visit relicsofthemoment.tumblr.com.

Roisin Power Hackett is a graduate of the National College of Art and Design and is currently doing the MA Art in the Contemporary World at the same college. She has published a literary magazine in NCAD known as ‘The Kite’ and has an art blog at roisinphackett.wordpress.com.