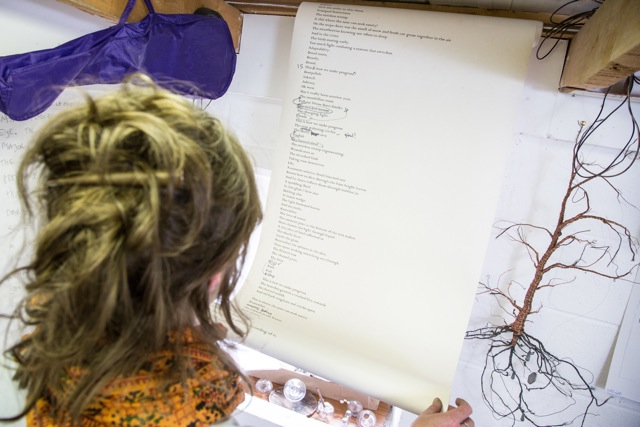 This exhibition marks the end of the artist’s residency at the Leitrim Sculpture Centre and shows Phoebe’s interdisciplinary practice and agile mind focused on and through the medium of Print. The resulting works showcase a variety of printmaking processes and also utilise the tradition of dissemination inherent in print to give the viewer a window into the world as Phoebe sees it – A world in which the parallels between printing processes and the complexities that structure reality are made clear through the artists vision.
Phoebe has a B.A. in Fine Art Media from the National College of Art and Design, Dublin, which incorporated a six month Printmaking Erasmus in Poznan, Poland, and is a self taught musician and writer. Her first collection of Poetry was shortlisted for the Patrick Kavanagh prize and she was also shortlisted for the Y-Tunes songwriting competition in 2011. She has taken part in a number of group shows and residencies, and has performed solo in various venues including The Creel, Westport and the Spoken Word stage at The Electric Picnic.
Gallery opening times – Wednesday to Saturday 11am-5pm
Exhibition runs until 20th July 2013.