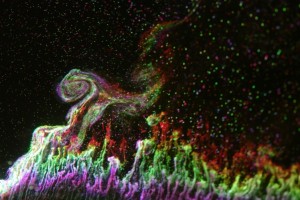 To mark the end of their current exhibition, Surface Tension, the Science Gallery are hosting an event called SYNERGETICA STUDIOLAB on Thursday January 19th at 6pm. SYNERGETICA STUDIOLAB will couple lectures with live performance and an installation to examine the future of water as a powerful source of clean energy, and in particular how we can learn from the processes by which it is naturally harnessed.

Paul Prudence (http://www.paulprudence.com/) is a audio-visual performer working with computational and algorithmic environments. His work focuses on the ways in which sound, space and form can be cross wired to create generative visual-music experiences. Paul also maintains the research weblog Dataisnature in which he writes about the interrelationships between natural processes, computational systems and procedural-based art practices. Hydro Acoustic Study is a live cinematic exploration of sonically activated hydrological events, specifically evolving waveforms, proto-cellular bubbles, and meniscus’s that grow and exhibit behaviour in direct response to sound.

Dmitry Gelfand (b. 1974, St. Petersburg, Russia) and Evelina Domnitch (b. 1972, Minsk, Belarus) (http://portablepalace.com/) create sensory immersion environments that merge physics, chemistry and computer science with uncanny philosophical practices. Current findings, particularly in the domain of mesoscopics, are employed by the artists to investigate questions of perception and perpetuity. Having dismissed the use of fixative media, their artworks exist as ever-transforming phenomena offered for observation. The duo has collaborated with numerous scientific research facilities, including the Drittes Physikalisches Institut (Goettingen University, Germany), the Institute of Advanced Sciences and Technologies (Japan), Ricso Lab (Russia) and the Meurice Institute (Belgium). They are recipients of the Japan Media Arts Excellence Prize (2007), and three Ars Electronica Honorary Mentions (2007, 2009, 2011). Their previous projects at Science Gallery include 10,000 Peacock Feathers in Foaming Acid and Camera Lucida.

Dr. Raoul Frese is an assistant professor in biophysics at the Department of Physics and Astronomy, in the Faculty of Science at VU University Amsterdam, the Netherlands. Dr. Frese graduated in experimental physics at the University of Amsterdam in 1995. Since, he has researched natural photosynthesis on the molecular and supramolecular level. Recently he has gained major funding from the Dutch science organization NWO for his research on ‘Nanoscale Photovoltaics and Photochemistry on Biosolar Cells’. His current research aims at the understanding of photosynthesis at the supramolecular level, to implement photosynthetic molecular bio-polymers in hybrid solar cells and to mimic photosynthesis using synthetic molecular compounds. The goal is to enhance or redirect photosynthetic performance and to create solar-to-fuel energy cells.

You can find out more and register for the event here.