Moving Stills explores the representation of a utopian community in the west of Ireland. Using the medium of film and photography, the work seeks to explore the auto-biographical difficulties and philosophical challenges posed by representing a community in which Wallis came to live as a child.

Ruby Wallis is a practice based PhD researcher with National College of Art & Design, Dublin (NCAD) and GradCAM. She completed her M.A. in Documentary Photography in 2007 at The University of Newport, Wales and a Degree in Painting at GMIT, 2004. 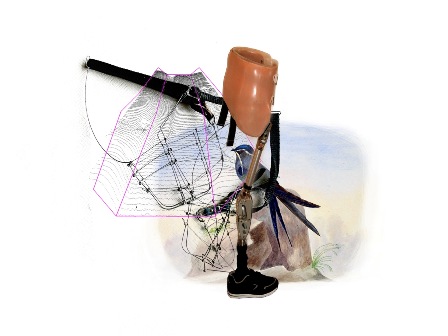 Work for One of Its Legs is Both the Same consists of painting / montage and digitally generated print into which are gathered as diverse a selection as possible of unassociated items of content, familiar, partially familiar and completely unfamiliar. They are set into paradoxical relationships of an abstract and / or choreographic order in which the elements themselves are left to find their own dialogs, seeking to tap an innate aesthetic we all possess and invite new readings from unanticipated associations.