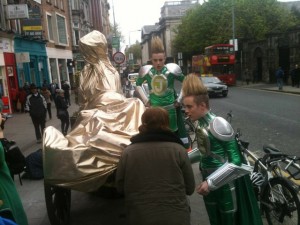 Update: I’m sure none of envisaged this project would involved one of the artists having to intervene herself when Jedward appeared on the scene.

Urban Interventions is an Interdisciplinary module between NCAD, Art in the Contemporary World Masters students and UCD 4th Year Architecture Students, undertaken in collaboration with Dublin City Council Public Art Programme and the Grafton Street Quarter Improvement Project. It culminates in a series of interventions around the Grafton Street area that are created by teams of MA ACW and 4th year architecture students. The majority of these will take place tomorrow (Thursday 3rd of May).

The focus is on the Grafton St. area of Dublin City centre and the students have been asked to consider this as their site of investigation and intervention. The term ‘Intervention’ here is used to indicate any temporary manifestation of creative work within a public space: taking the form of a sculptural project, a live performance event, a protest, a public reading, a presentation of research documents, or any number of other possible articulations of research in the context of the everyday urban environment.

A final intervention, Orchestral Osmosis, will take place on Thursday of next week (10th May). It happens at the DIT School of Music on Clarendon Row at 12PM and involves amplification out on to the street of the sounds of rehearsals taking place within the building. The artists involved are Laura Smith and Niamh O’Doherty.