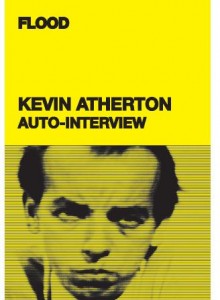 NCAD lecturer Kevin Atherton’s book, Auto-Interview, will be launched at Temple Bar Gallery + Studios next week. The book is based on an ongoing sequence of video interviews that Kevin has conducted with himself. The following info is from the press release:

FLOOD is delighted to announce the publication of Kevin Atherton’s Auto-Interview, extending a lifelong series of work where the artist has interviewed himself on video.

Auto-Interview is interesting on many levels, as a means of asking who is doing what in the business of encountering and interpreting an artwork, but also from an historical point of view – the interview provides an ideal opportunity to look back into the beginnings of key practices, such as video art, new media, work on television, etc. The interview is also about an artist being, or at least trying to be, brutally honest about their own practice, its relevance, context and meaning, and if indeed it should be any of these things.

This publication is the first of a new series, with future publications forthcoming on a yearly basis. Auto- Interview retails for €10 / £8.

KEVIN ATHERTON (born Isle of Man in 1950) is an artist and fine art educator with an ongoing interest in the relationship between the virtual and the fictional. Based in Dublin, he is the Head of the Department of Postgraduate Pathways in the Faculty of Fine Art at the National College of Art and Design (NCAD). He has exhibited in museums and galleries through out Europe and North America, most recently in 2012 in ‘Remote Control’ at the Institute of Contemporary Arts in London. In 2009 his video installation ‘In Two Minds – Past Version’ was included in ‘The Studio Sessions’ at the San Francisco Museum of Modern Art. Also in 2009 his video work was included in ‘Changing Channels – Art and Television’ at the Museum of Modern Art Vienna, and at Tate Britain in ‘Rewind and Play’. Since the early eighties he has carried out over a dozen large-scale public sculpture commissions throughout Britain and Ireland including in 2009 ‘Another Sphere’, a surveillance sculpture, in Ballymun. In 210 he completed a PhD in the Faculty of Visual Culture at NCAD.

FLOOD is a Dublin-based contemporary art project curated by Paul McAree. The project was initiated to provide opportunities for the presentation and dissemination of artwork in alternative ways. FLOOD aims to develop its presence in Dublin city, from printed projects to organising exhibitions in temporary locations.