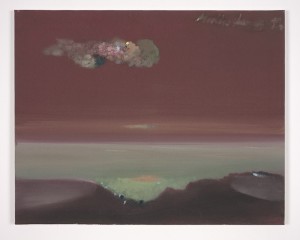 A new exhibition of work by Merlin James opens in the Kerlin Gallery this week. The following information is from the Kerlin website.

‘…James takes painting’s multiple and overlapping histories partly as his subject matter and partly as a point of departure. The paintings are stylistically promiscuous – it is hard to describe or even imagine a “typical James.” Yet seen together they not only make perfect sense but also articulate something of the infinite freedom and the stubborn vitality of the medium.’
(Matthew Higgs, Art Forum, December 2011.)

In recent years Merlin James has made paintings often on semi-transparent supports, and with picture frames that are integral to the work. These quasi-conventional frames, and the stretcher bar structures partly visible through them, may be fabricated from humble, seemingly salvaged materials, pressed into service as ‘fancy’, high-art objects.

James also continues to paint on canvas, frequently using hair, sawdust and other unconventional substances as well as paint. Works may be apparently abstract, or may feature diverse ‘subjects’ – heads, animals, emblematic figures, canals, bridges, skies. Small vernacular buildings of uncertain vintage – mills, homesteads, old factories, tower-blocks – are often scattered through James’ pictures, either as representations in paint or as miniature ‘model’ buildings made from wood off-cuts and fragments and physically incorporated into the work. Expansive spaces are evoked, and the vistas can suggest dream- or memoryscapes, or landscapes seen in passing.

James lives and works in Glasgow. Solo exhibitions have included shows at the National Gallery, Wales (1995), Kettle’s Yard, Cambridge (1996), Mummery & Schnelle, London (2003, 2006, 2008, 2010) and Sikkema Jenkins & Co., New York (2002, 2008, 2011), New York Studio School (2007) as well as Kerlin Gallery (2002, 2008). In 2007, Merlin James represented Wales at the 52nd Venice Biennale. He has been a visiting lecturer at many universities in Britain and the USA and in 1996 gave the Kingston University Stanley Picker Lecture at the Tate Gallery entitled ‘The Non-Existence of Art Criticism’. In 2002, he was the first holder of the Alex Katz Chair in Painting at The Cooper Union, New York. James is represented in many public and private collections worldwide. In 2010, James received the Scottish Arts Council Visual Artists’ Award. He recently held a solo show in the Douglas Hyde Gallery, Dublin (2012).