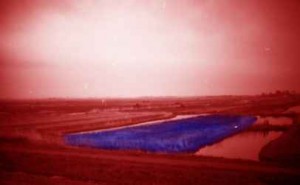 Bea McMahon’s new exhibition, Root, will open at Temple Bar Gallery & Studios on Thursday 11th of October at 6pm. It’s a solo exhibition of newly commissioned work, the centrepiece of which is a moving image-work shot in The Netherlands. The following information is from the TBG&S website:

The centrepiece of this exhibition is amoving imagework, shot at Het Twiske, an untouched Dutch polder landscape near Amsterdam. McMahon’s use of this landscape, with its lack of clear boundaries between water and land, is a reflection of her curiosity about the surface of things.

McMahon’s interest in mathematics, Pythagorean theory, Greek myth, and boundaries such as skin and water are also manifested in the work. Ideasabout transfer across boundaries in turn evoke the concept of the metaphor; the word metaphor coming from the greek meta-“over, across” + pherein “to carry, bear”. McMahon has described the work as ‘an examination of the light interchange at the surface of things – I like to think of the site of the boundary of a body as a soft crossing or thoughtful crossing.’

The significance of the title Root, can be found in its homonyms;a branching plant root to explain visually the theory of evolution or diversification, and the root of a number which first embedded irrational numbers inbetween the rationals and upset the Pythagorean’s theory of divine correspondence between numbers and the universe. It is alleged that Hippasus, on discovering √2, was thrown off a boat and drowned by his Pythagorean companions.

McMahon’s artistic practice handles readymade conventionsand concepts and reworks themin a way which invitesassociations of an order somewhere between irreverant and irrelevant. Her work brings something that is already part of reality to a form, and as such is at the service of real things rather than fictions.The real world has a variable density, depending on the quality of its perception. There is singular curiosity together with a sense of conviction that pushes Bea McMahon to interrogate physical phenomenon, and a certain talent, with which she gives a form to invisible but also essential layers of the real world.In acceding to her vision she induces in the viewer a fleeting feeling of ‘I believe you, but I’m not sure quite what I’m believing.’

Bea McMahon’s recent exhibitions include All humans do, White Box, New York, 2012, A series of Navigations, The Model, Sligo, 2012, Warp and Woof at the Centre for Contemporary Arts in Glasgow, 2011, at Flat Time House, Peckham, London 2011, Nothing is Impossible at The Mattress Factory, Pittsburgh 2010, True Complex at Void, Derry and The Curated Visual Artist’s Award at The Douglas Hyde Gallery, both 2008. She is currently a resident at the Rijksakademie van Beeldende Kunsten, Amsterdam. She is represented by the Green on Red Gallery, Dublin and is included in the collections of the Irish Museum of Modern Art, the Office of Public Works and the Arts Council of Ireland.

This exhibition was producated with the assistance of the Rijksakademie van Beeldende Kunsten, Amsterdam.
Curated by Rayne Booth