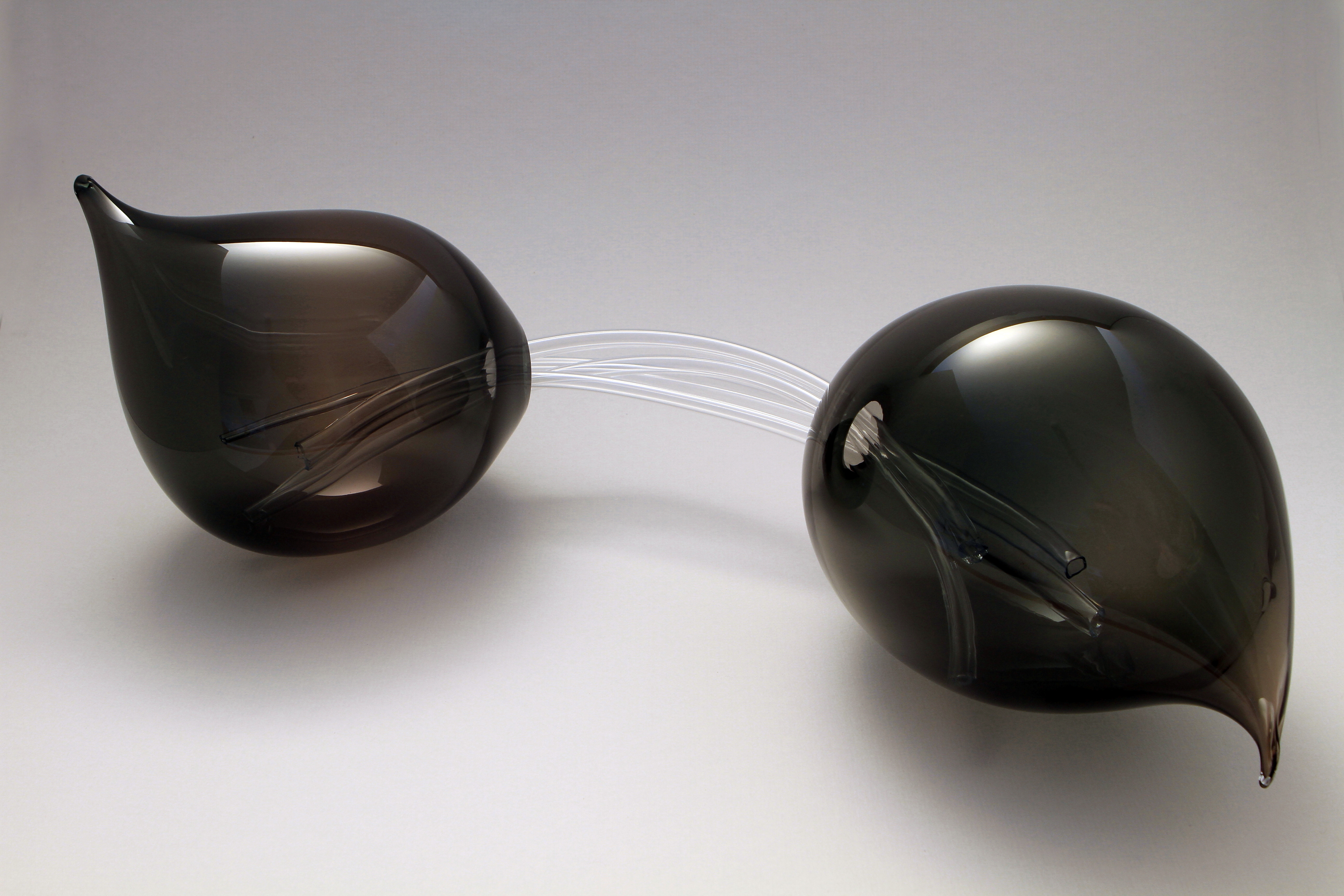 What is the exhibition about?
Existence as encounter – with the self, and with others: this is the theme of Louise Rice’s exhibition ‘As You Are We’. Developed over the course of her artist-residency at the Leitrim Sculpture Centre, this new work extends Rice’s career-long exploration of the ‘human, all too human’ through the medium of glass. In this new body of work Rice seeks to capture the delicate balance of forces at play in human connectedness.

Tell us more about the work?
This connectedness is never more profound than in a mother-child relationship. A game repeated in every culture, where the child revels in the excitement of the mother’s momentary absence while being repeatedly reassured of her presence, is represented in the drawing, ‘Peekaboo’. The intensity and physicality of the mother-child relationship is continued in the umbilical-like tubes of ‘Motherline’ and the speaker/listening device of ‘Motherline II’.

The central installations of the exhibition, ‘Conversation Piece’, ‘Sparring Partners’ and ‘Cupidity’, look at relationships which are also intense but less unconditional than the parent-child one. This conditionality creates a need for negotiation – the attempt to ‘get through to’ someone – which won’t always be successful, but sometimes is.

How does it relate to you?
In need of negotiation is the relationship with the self and with the divine or numinous, explored in ‘Self on Self’ and ‘Thou’. The Austrian philosopher Martin Buber has written about the importance of the I-Thou relation as an instance of authentic dialogue. Thou ventures into this too-vast territory, but cryptically, as if a formula could conjure the divine.

Who has influenced your work?
Louise has been influenced by Artist’s like Kiki Smith and Louise Bourgeois. She has worked with American glass Artist Richard Meitner who is based in the Netherlands. The history of glass and glass-blowing has come along way from the early days of glass artists like Harry Clarke with the use of etching and stained glass in his window’s found throughout Ireland.
Louise’s use of glass brings it into the realm of contemporary Irish glass with it’s ethereal sculptural forms.

How has the residency supported you?
The artists residency at the Leitrim Sculpture Centre in Manorhamilton which has been funded by the Leitrim County Council has made it possible for her to develop the scale of her work and to get the opportunity to spend time to develop her practice further and to be given the time to support her as a wife and mother of three.

National campaign for the Arts

Biog
Louise Rice is a professional glass artist based in Manorhamilton. Originally from County Armagh, Rice trained as a glass-maker at Edinburgh College of Art and later at Amsterdam’s Reitveld Academy where she developed a distinctive body of sculptural glasswork, often combined or juxtaposed with found objects and other materials. She regularly teaches glassblowing workshops at the Leitrim Sculpture Centre, where she set up a hot glass studio in 2007. Rice exhibits her work widely, most recently in the Traver Gallery in Washington, USA, and in June 2013 will exhibit ‘As You Are We’ at the Glas Galerie Leerdam in the Netherlands. Her work features in national and international collections, including the National Glass Museum of the Netherlands and the Ulster Museum.

The exhibition continues till 30th of November and will tour to the Irish Craft Portfolio Exhibition at the RHA.

Kathy O’ Leary is an Irish Visual Artist working in multidisciplinary mediums including drawing, film, print-making, glass and writing. She’s also curated exhibitions and is a trained facilitator.
She is currently a post-graduate student at NCAD on the Art in the Contemporary world.
She is originally from West Cork and now based in Leitrim.