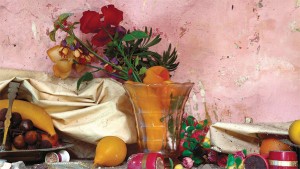 Feralis.
A solo exhibition of artwork by Elaine Byrne.
Curated by Michele Horrigan
The Belltable, Limerick.

Elaine Byrne’s work draws on the emotive complexities surrounding memory and ruin. Investigating both an architectural and a pyschological dimension within these subjects, she ruminates on the nature of environments that initially appear abandoned and forgotten. Yet, by subtle degrees, her practice places a nuanced spotlight on the allure of lived history and the passage of time.

For her solo exhibition at The Belltable, Byrne presents a series of photographs and videowork related to an abandoned cottage in County Limerick. Acting as a sustained meditation on this building, deserted since the early 1990s, she pieces together a narrative around its’ previous occupant Hanni, a settled Traveller. Working closely with remaining objects still in the cottage and with Hanni’s nephew Willie Harty, a highly personal history unfolds of the local town, familial relations and the Traveller way of life.

For sixteen minutes of Byrne’s video, Willie’s monologue wistfully describes scenes, often bittersweet reminiscences of a now lost way of living, as footage of the cottage’s ruination is seen. In this sequence the cottage somehow straddles two times and seemingly exists in the immediate here and now, and in the distant past. While W.B. Sebald or a passage from Virginia Woolf (as in the artist’s research note incorporated in this brochure) might be alluded to in terms of Byrne’s treatment, there is an openness in her authorship to be acknowledged: the relationship with her off-screen narrator. Given this platform, he re-activates an associated memory from both his own and the building’s past.

Our relationship to the past is characterised by knowledge of the insurmountable distance to it. Only memory is capable of bringing the past into the light of the present. It is a procedure, however, that does not take place without interpretation and selection and hence is constructed and fragmentary. Byrne’s work can consequently be seen as a technique of remembrance. This is not only in the sense of acting as a container of the past and how it is ordered and inscribed in spaces, but moreover as an active manifestation: an artistic process that can shape our relationship to it.

Dublin-based Elaine Byrne has exhibited in the city’s Douglas Hyde Gallery and Royal Hibernian Academy, where she was awarded the Curtin O’Donoghue Emerging Photography Prize in 2012. Internationally she has presented at Art Basel Miami and Centre of Fine Art Photography, Colarado. Feralis was produced during a residency at Askeaton Contemporary Arts in 2011-2. Concurrent to her exhibition at The Belltable, she will open a solo exhibition at the Kevin Kavanagh Gallery, Dublin in early January 2013.