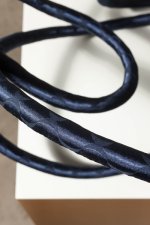 A new exhibition by artist and MA ACW tutor Isabel Nolan opens at the Goethe Institute this coming Thursday. Unmade consists of a new sculptural piece that was original commissioned by Vaari Claffey for Gracelands 2012. Further information below is from the Goethe Institute website. On December the 11th at 6pm Vaari Claffey, Isabel Nolan and others will present an illustrated conversation to accompany the work.

In her exhibition “Unmade” which will be opened in the Goethe-Institut’s Return Gallery on Thursday 15 November 2012 at 6pm, Isabel Nolan refers to documentary material from the Prinzhorn Collection in Heidelberg/Germany.

“In 1894, on at least two occasions, a resident of a psychiatric hospital in Heidelberg, Germany tore up her bed clothes. Just two extant photographs document the results of Marie Lieb’s strange actions. They show strips of fabric, cotton perhaps, of differing lengths which are carefully laid out in patterns upon the wooden floors… By placing the torn textiles onto the floor, she made a carpet of sorts. But it is only the bones of a carpet…” Isabel Nolan

It is the provisory, absurd nature, and endless capacity for re-configuration of Marie Lieb’s rugs which provides the starting point for a floor based sculpture by Isabel Nolan. The sculpture is comprised of 144 sections of fabric covered mild steel pipe. These units vary in length and in the colours and patterns of the different fabrics hand-stitched around the pipe. These elements can be laid out in multiple ways to carpet a floor but they still fail to function as a rug. The sculpture was originally commissioned by Vaari Claffey for Gracelands at EVA International, Limerick, 2012.

For this exhibition the gallery has been painted to match the colours of the stairwell and landing of the Goethe Institut. The sculpture is presented largely unassembled but is accompanied by a series of photographs which document the piece laid out in several of its possible rug-like arrangements and a new text by Nolan.

Isabel Nolan was one of seven artists who represented Ireland at the 2005 Venice Biennale. Recent exhibitions include “A hole into the future” which travelled to Musée d’Art Moderne de Saint-Etienne in 2012. She is represented by Kerlin Gallery Dublin.