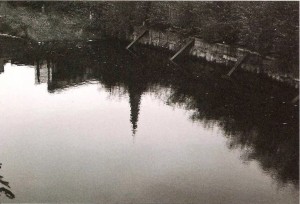 Recent MA ACW graduate, Ruth Clinton, and collaborator Niamh Moriarty, launch the first full presentation of their collaborative art practice at Pallas Projects at 6pm on Friday March 1st. ROTATOR comprises of an exhibition and a series of events all of which are inspired by an investigation of the architecture and geographical surroundings of Pallas Projects/Studios. Highly recommended.

A lake formed from an abandoned, water-filled excavation, and the underground course of the river Poddle meet under the pull of the moon in Ruth Clinton & Niamh Moriarty’s first large-scale presentation of their collaborative practice: ROTATOR – an exhibition and series of performances and events by the Irish artists. ROTATOR emerged from Clinton and Moriarty’s collaborative investigation of the architecture and surroundings of Pallas Projects/Studios. The works will connect the gallery to the city and emphasise the physical and historical depth of place through engagement with some of Dublin’s hidden topographies. The site is located on an island that is perched between two strands of the living, breathing waterway: the river Poddle. Here, viewers are invited to steal a glance at an otherwise hidden artificial lake, a disembodied tour (transported from the crypt of St. Michan’s Church) and an endlessly descending red-brick wall.

The programmed events will weave together a narrative of local history, folklore and classical myths. For example, the Giant Balor, whose eye was catapulted from his skull to burn a gaping hole in the earth where it fell; the river Poddle rising to flood St. Patrick’s Cathedral where it flows directly along the aisle; and the Pallas crater that lies south of the Sea of Vapours on the moon, once thought to be a vast ocean.

The site of Pallas Projects/Studios and its environs are the protagonist in this exhibition, as the artists peer through walls, under floors and along pipes into Dublin’s gloomy depths. Storytelling, alongside a detailed research process, attempt to convey the viewer along Clinton and Moriarty’s visions of eternity. Through fanatic acts of resurrection and preservation, they enact humanity’s struggle against overwhelming natural forces, asking how we can look beyond our limited perception of infinity. This question is approached in ROTATOR through a mimetic play between artists, medium and subject: signs of perpetuity recur at each level of apprehension of the work. ROTATOR is one of an ongoing series of exhibitions in the new Pallas Projects/Studios at The Coombe, where invited artists are afforded an extended – up to one month – preparatory period in the project space, allowing them to attempt a leap, to consider, experiment and test the relationship between studio and exhibition practice.

Events scheduled during the show include :
08/03 & 15/03: A selection of short archival documentary films will be screened twice in the artists’ studio. Places are limited so please book ahead by contacting ruthandniamh@gmail.com

22/03: Michael O’ Rourke, philosopher and co-founder of the Dublin Unit for Speculative Thought and Jeffrey Jerome Cohen, English professor and Director of Medieval and Early Modern Studies at the George Washington University will discuss ROTATOR in relation to aspects of their own work. This will take the form of a tour, led collaboratively with the artists. The talk will be open to the public.

27/03: A performance scheduled to coincide with the full moon. Places are very limited so if you would like to attend please contact ruthandniamh@gmail.com to be entered into a lottery.