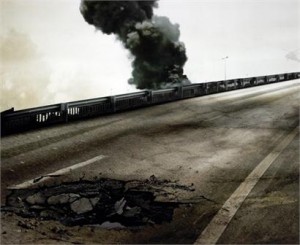 Opening at Belfast Exposed on Thursday 14th March, Thresholds is a photographic group exhibition curated by MA ACW student, Ciara Hickey. There will be an artist’s talk with Maja Daniels, Luke Stephenson, Peter Watkins and Tereza Zelenkova, chaired by Ciara, at 3pm on Friday March 15th. Full details at belfastexposed.org.

The perceived veracity of a photographic image, combined with its ambiguity, creates a unique space where fiction and truth intertwine. It is at this permeable border between reality and fiction that a photograph becomes a threshold to an infinite series of meanings. Thresholds explores the relationship between truth, fiction and fantasy within documentary photography. All of the artists included in the exhibition have created a body of work documenting a specific subject or site. Each image poses a challenge to our expectations of reality, and resonates with the realm of the imaginary.

Maja Daniels (b. 1985, Sweden) Daniels is the recipient of the Taylor Wessing Portrait Prize, and was selected as one of the Magenta Foundations Flash Forward Emerging Photographers of 2012. Daniels’ photographs have been included in recent exhibitions at the Royal Academy of Arts (London), The Photographers Gallery (London), The National Gallery (London) and Getxophoto (Bilbao).

Peter Watkins (b. 1984, UK) Watkins is currently an MA student at Royal College of Art. He has a published book with JSBJ, and a self-published book with Tereza Zelenkova. His work is part of the collection at Fotomuseum Winterthur. His self-published book Index of Time (2012), in collaboration with Tereza Zelenkova, was selected as one of the best books of 2012 by Photo-Eye. He has recently exhibited at the Northern Gallery of Contemporary Art (Sunderland), and Royal College of Art (London).

Tereza Zelenkova (b. 1985, Czech Republic). Zelenkova received her MA in Photography from the Royal College of Art (2012). She is a finalist of The 1000 Words Magazine Award 2012, and Fresh Faced & Wild Eyed 2011 awarded by The Photographers’ Gallery. She has exhibited her work at the Lianzhou Foto festival in China, the Perth Institute of Contemporary Arts (Perth), and Northern Gallery for Contemporary Art (Sunderland). Her work is part in the collections of Fotomuseum Winterthur and Saatchi Gallery.

This workshop is facilitated by Belfast based writer Emily Dedakis. Over the course of the session, the photographs in Thresholds will be used as the basis for several creative writing exercises