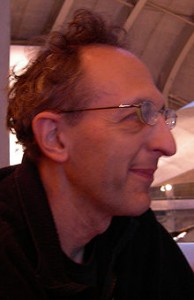 This conversation between Paul J. Ennis (co-founder of the Dublin Unit for Speculative Thought) and Steven Shaviro (Wayne State University, USA) will range over such topics as Whitehead’s process philosophy, panpsychism, Quentin Meillassoux’s thought, the films of Lars Von Trier, neurophilosophy, Kant’s critical aesthetics, Graham Harman and relations, correlationism, among others. This dialogue will not only provide a snapshot of Shaviro’s recent and current work but will also open up a number of important questions relating to speculative realism and continental thought more generally.

Steven Shaviro is the DeRoy Professor of English at Wayne State University. He is the author of The Cinematic Body (1993), Doom Patrols: A Theoretical Fiction About Postmodernism (1997), Connected, Or, What It Means To Live in the Network Society (2003), Without Criteria: Kant, Whitehead, Deleuze, and Aesthetics (2009), and Post-Cinematic Affect (2010). His work in progress involves studies of speculative realism, of post-continuity styles in contemporary cinema, of music videos, and of recent science fiction and horror fiction. He blogs at The Pinocchio Theory: http://www.shaviro.com/Blog