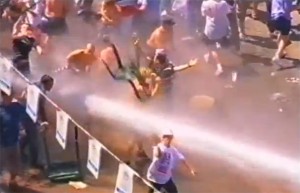 Won’t you tell me the last time that love bought your clothes?

Lily Cahill [b.1985] and Rob Murphy [b.1986] are recent graduates of the MA – Art in the Contemporary World [2011/12] at the National College of Art and Design, Dublin. They have BA [Hons.] Degrees in Visual Arts Practice [2011] from the Institute of Art, Design and Technology, Dun Laoghaire. For the past year they have been working collaboratively on sculpture and video. Recent exhibitions include Your Cruelty at Flat_Pack, Dublin [2012], Scum at The Joinery, Dublin [2013], Claremorris Open, Mayo, curated by Andrew Wilson [2013], and an image of their breakfast appeared on the MOMA website on the 18th of July, 2013.