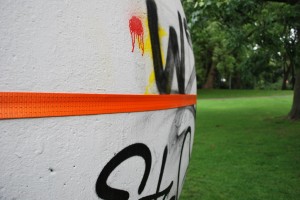 The Wrong Place is a new exhibition by artist in residence, Michael Dignam. As a recipient of the recent graduate residency award, Michael Dignam will show a body of work in The Joinery gallery space.

The title of the exhibition is taken from the 2000 essay by Miwon Kwon of the same name, draws on the Münster Sculpture Project, Germany, as its point of departure. Taking works by Claes Oldenberg, Bruce Nauman and Donald Judd in the 1977 edition of the project, Dignam intervenes with both the physical and mental space that these sculptures hold. Questioning but also reviving the relevancy of these works, The Wrong Place points to the embodied human and its experience of isolation in public space.

The Wrong Place is curated by past and current students of Art in the Contemporary World – Maeve Ann Austen and Jennie Taylor.

Michael Dignam is the recipient of the NCAD Student of the Year Award, 2013.