What a fantastical world we expose when we penetrate the depth of our unconscious and concurrently the zenith of our imagination. Can any of us say for certain which is felt to be more consistent with that of ‘the real’: the structures of the conscious mind, or “…the unconscious and its – for the most part unintelligible – order”(2) ? According to Carl Jung, the unconscious acts as “the symmetrical counterpart of the conscious mind and its contents, although it is not clear which of them is reflected and which is reflecting… we could regard the centre as the point of intersection of two worlds that correspond but are inverted by reflection.”(3)

Who’s to say? If there exists such thought to question, then maybe? For, as Meillassoux asserts, “the capacity of thought cannot be richer than the capacity of reality… If we can imagine so many things, this must be just the shadow of reality.”(4) Perhaps what the conscious mind perceives is in fact a mere reflection of the unconscious world and its contents? Perhaps, as self-professed rational creatures, imagination exists for this very reason? “We are rational and have imagination. Why? Because in fact they’re the same thing.”(5)

Returning now to the stuff you can touch (save for the art)… The Garden Galleries, adjacent the formal gardens of the now Irish Museum of Modern Art, has on display the work of an artist who has captured our dreams (reality?) for us to see, and see we do: the extra-ordinary, or should I say, the supra-ordinate.

The story propelling this ‘once was lost and now is found’ artist by the name of Leonora Carrington, is one of passion for the imaginatio above all else. Her future was set – in stone, so to speak. Her affluent upbringing in Lancashire meant expectancies bound up in marriage, property, and her own formal gardens. Leonora Carrington decided upon a world of her own making, fit to her design. Parental dissention found her in Paris in the company of the Surrealists, and it was here that she made for herself a new beginning, one in which she was free to explore that ‘other’ and experience her imagination as alive and well. Mexico called for her as World War II encroached, and it is here where she remained until her death in 2011. Carrington spent her life in Mexico painting, and studying such texts as the Kabala, the ancient texts of the Mayans (Popol Vuh) and the writings of Carl Jung on alchemy.

Her roots taste of ‘Celtic’ blood, on her Mother’s side. As a child, Leonora would visit her Irish Grandmother, an important symbolic figure who provided her with an inheritance of Irish Mythology. Her trunk, as it were, was later reinforced by the ideology of the Surrealists. For, Leonora was at this point branching out as an artist in her own right. And in Mexico – the most surreal place in the world, according to André Breton, her branches sprang many leaves depicting what Lévy-Bruhl termed the représentations collectives.

For the most part, Carrington’s work remained relatively unknown on this side of the world; whereas now it is felt to be found as though once lost. The vast array of her paintings, tapestries and some of her sculptures occupy every space available in the Garden Galleries. But rather than a walk-through in chronological order, the curator, Seán Kissane, has arranged the work with a thematic structure in mind, relocating Carrington’s work outside of the ordinary formal language of art.

We could of course discuss the work using terms like representational, formalist, iconological, even iconoclastic, but in Carrington’s own words: “you’re trying to intellectualise something, desperately, and you’re wasting your time…that’s not a way of understanding.”(6) Carrington is pointing to, what Jacques Lacan also felt, that “the important thing is not to understand but to attain the true.”(7) Understanding and Truth; both function by way of a parallax gap. Parallax refers to the shift that occurs in the position or direction of an object when viewed from different positions, the object itself being the cause of the gap whereby there feels to be a continual confrontation between “two closely linked perspectives between which no neutral common ground is possible.”(8) Slavoj Žižek also states that this “gap is asserted as inherent to humanity itself…”(9) This natural psychological setting is certainly fertile ground from which to experience The Celtic Surrealist, and to be transported into a metaphorical world of mythological themes and alchemical symbolism.

Carrington’s artistic rendering of her childhood home, Crookley Hall (1947), haunts Room 1. But there is, however, an alternative that offers more direct access to her childhood by way of openly displayed copybooks, albeit behind glass. Our lead in to the story of Leonora Carrington as artist takes the form of strangely assembled creatures that live on the planet Starvinski. The presence of these copybook drawings are a gentle curatorial push in the right direction… imaginatio above all else.

The painting chosen by the curator to promote the exhibition is incidentally the painting which holds the Carrington auction record at Christie’s, New York, fetching $1,482,500. The Giantess (1947), sometimes known as The Guardian of the Egg, is a fine painting, delicate in its address of the Great Mother archetype who is re-called to mind by Carrington’s repeated touch of tempera on a wooden panel. She stands tall, negotiating land, sea and sky; all the while, birds, proportionate to the Giantess, swoop but the egg is kept safe between hands. The egg as symbol simultaneously holds the key to life and non-life, and in alchemical terms, the egg functions philosophically as a sealed vessel in which the magnum opus takes place, uniting both the microcosm and the macrocosm.

The Irish connection is tenuous to say the least but it is there. However, as a title, The Celtic Surrealist is a clear museological marketing ploy, attempting to draw in more Irish viewers by drawing upon the ‘lack’ in our national psyche. Room 3 is also thematically experienced as a slight connection to Carrington’s interest in hunting. Nevertheless, it is here where we find a tangible relationship to Carrington’s Irish ancestry. In her painting Red Steeds of the Sidhe (1996), the artist highlights an Irish folktale.

The story goes that King Conaire, while out riding, noticed up ahead three men of the Sidhe, also known as the Tuatha De Danann. The king then sends his son to follow the men who were now riding away on red horses. There was a message for the King from the Sidhe: “Though we are alive we are dead. Great are the signs: destruction of life; sating of ravens; feeding of crows, strife of slaughter; wetting of sword-edge, shields with broken bosses in hours after sundown.”(10) Red Steeds of the Sidhe is a painting which illustrates this warning as fact, and I believe it to be very telling of our modern mess that these words have found their way back to us from the fairy-folk. Leonora Carrington made her choice of sword from which to plunge it into the ‘now’, and the horses do indeed burn red from within.

As World War II continues, Carrington flees to Spain after the arrest of her lover Max Enrst. The emotional state that ensues leads her to be institutionalised. This particular chapter of Carrington’s life-story was published in 1944 in a book entitled Down Below, and this self-same named room focuses on the work that speaks of where Leonora went when she was down below.

There is an untitled etching in this room that I wish to draw to your attention. One supreme Dog-figure stands round; several smaller dogs have their heads tied in place within the overall structure, they are also seen to function as vital body-parts for the one ‘Dog’. Consider the purpose of places such as that asylum in Santander. Now, consider the real purpose. In her etching, Carrington takes on the truth of things. Like the wolf all those generations ago, man has been bred for ‘friendship’ in order to preserve order and ultimately the existence of such a framework. Illusion and the resultant delusion attempts to fill the gap inherent in humanity, and should this not work: lock us all up for real?

The Celtic Surrealist is an exhibition that animates the uncanny. Carrington’s delicate disclosure of ‘the real’, the lack that exists between our waking and dream state, is seen again and again through her decisive use of tempera and her evolved relationship to it. The inclusion of her tapestries in particular fall short due to the lack of feeling and material depth when compared with the paintings. And her sculptures function as well-needed interruptions in the physical space while on the meta-physical journey.

Carrington’s work is an attempt to bridge the gap that exists inherently in all things. What her work actually does is facilitate that which is calling to be recalled. I would like to end with a tale: A slave boy found himself being asked questions by Socrates of a geometric slant. The slave boy subsequently came to the truth of this geometric proposal without any prior knowledge of the issue (Meno, 402BC). In this way, Socrates demonstrated the possibility of a prior knowledge existent before consciousness and that in some way learning is in fact mere recollection. Let us remember that which we don’t know. Let us dream. 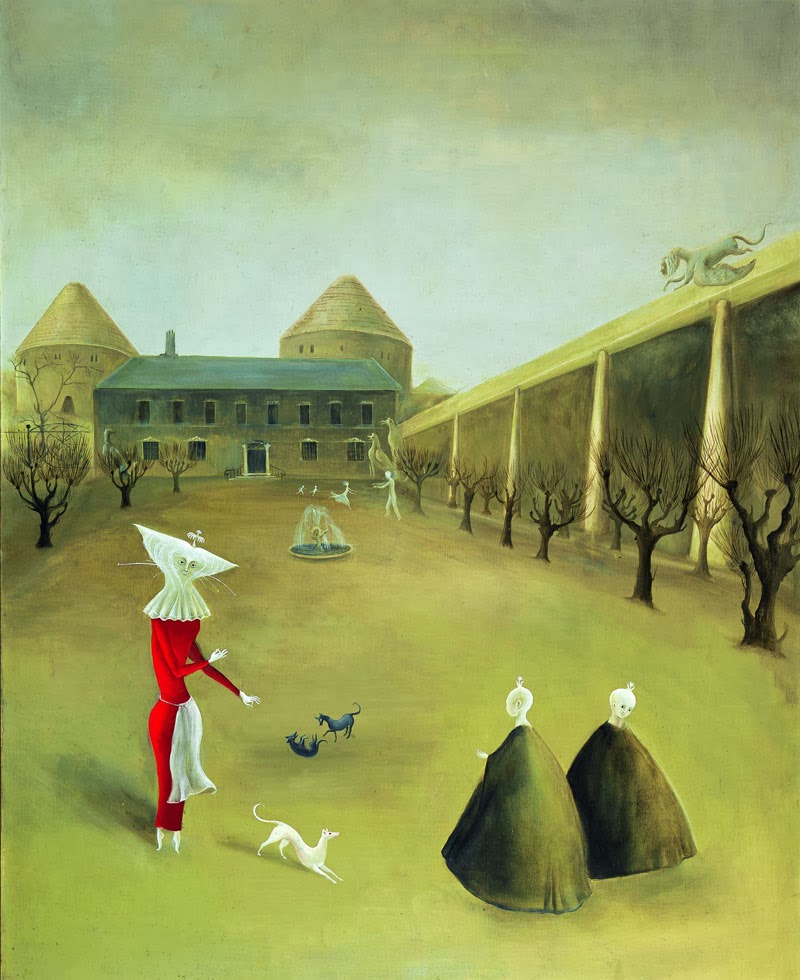