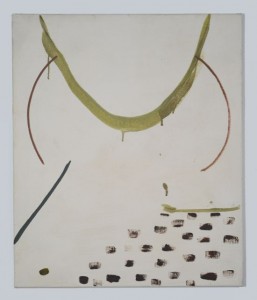 “Since painting is realised today within the horizon of conceptual practice, it must be grounded in a context that is no longer its own. That means, on the one hand, that an appeal to the specifics of the medium as its sole justification is no longer possible. Painting can no longer just be painting.“ (Jan Verwoert)

Since the 1960s, the conceptual justification for painting practice has forced many would-be painters to discard their painting brushes altogether for another medium or even career. Before Conceptualism and Rosalind Krauss’ heralding of the “post-medium condition”, painting was happy just being painting; with historical and metaphysical self-justification. Then, following Clement Greenberg – when art was art and everything else was everything else – art began its vanity project of self-reflection. The What? and Why? of art was posited. Painting was speechless in the interrogation lights of this conceptual, contextual and academic turn.

The title and starting point for this discussion between Damien Flood and James Merrigan was suggested by a recent painting by Flood entitled In Brackets (pictured above), which acts as the initial blank signpost for the discussion around the artist’s third solo exhibition ‘Interior Sun’ at Green on Red Gallery, Dublin. As always, Flood’s painting titles give away some of the ghost of meaning. However, In Brackets, the ‘conceptual’ is explicitly gestured by Flood, suggesting an intentional collision between the medium of paint and its conceptual unwinding, or rewinding. In the work, the literally painted-on round brackets amid the hyphen dabs of paint, suggest words, or imply that words are unnecessary. At this medium/concept impasse the justification for painting is questioned: Where does the medium end and the idea begin?