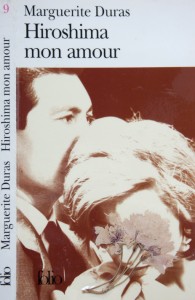 …our own stories may be constructed by a prosthetic memory mediated through book and film. Nicola Whelan

The Joinery is pleased to present work by recipient of the 2014 Graduate Residency Award, Nicola Whelan (NCAD). Whelan’s new series, #AndHerPaleFireSheStoleFromTheSun draws on the narrative structure of both Vladimir Nabakov’s novel Pale Fire and Alain Resnais’ film Hiroshima Mon Amour, to create works that investigate the tension between truth and fiction; the objective and the subjective; and between seeing, knowing and experiencing.

The exhibition will include multiple daily screenings of Hiroshima Mon Amour at the Joinery, accompanied by a daily Twitter-based performance from the artist in response to the film and a display of archives of real and fictional events. The project will conclude with a gallery based talk with the artist and the exhibition curators on October 30th 2014.

The film Hiroshima Mon Amour tells the story of a French woman and Japanese ex-soldier who meet by chance in Hiroshima a decade after the bomb and subsequently become lovers. They converse about their individual traumas through a repetitive, structured dialogue and in doing so they increasingly confuse real, lived experience with prosthetic memory, a memory made of mediated images of the Hiroshima bomb. Their individual personal traumas and identities weave together to create a new unstable narrative of universal trauma.

Whelan shows documents of a security guard’s response to watching the film in an abandoned shop front when called out to silence an alarm. Increasingly drawn into the narrative, the security guard writes detailed notes of his experience on his call sheets, creating yet another chronicle of the film. Whelan juxtaposes this with her own experence of time spent in Hiroshima, gathering and collating a personal archive that blurs the lines between fact and fiction, truth and fantasy, the collected remnants of what was, may have been or never happened.

Whelan constructs an aggregate of reality, fiction, prosthetic and reliable memory for the show, featuring live performance, archive, a twitter event alongside the exhibition. You are invited to follow @Elle_a_Nevers and @Lui_a_Hiroshima to take part in the twitter event for the duration of the show.