One could almost be excused in missing a tiny gallery along a street in Waterford City. Unassuming and ironically it is quiet. If a building can be quiet and taking into account this gallery is called Soma Contemporary which exhibits and examines sound art. An art practice commonly associated with the term, “acoustic sculpture”.

Play It By Ear is the first solo exhibition by artist Richard Carr and the culmination of several years of research and work that began with a trip in 2012 to Mt. Kerkis, Greece and Pythagoras’ cave. Tradition holds that Pythagoras became the world’s first acousmatic practitioner when he fled to the cave around 400 BC and began to teach his students from behind a screen to increase their listening abilities.

Sound is experienced through the single sense of hearing. It is an aspect of an object that often gets overlooked in a busy bid to “see” an object with the other senses such as sight, taste, and touch. An object or thing does not have to possess a sound or more technically stated, the sound may not be audibly perceptible, so that the absence of noise is in itself, a sound. The auditory experience might well fit into a category termed slow art. One must slowdown in order to “catch” what is intended to be heard. And often times what we hear does not correlate with what we see.

Carr’s sound installations could produce jarring experiences for the viewer/listener for the above reason, the objects seen did not necessarily link to the sound heard. One particular piece which so beautifully exemplified this was a sleek Ikea type glass shelf hinged to a white wall along with natural elemental noise. While one end presents as a distinctly minimalistic architectural design, the other end is a sound emitting near this design of a deeply primal environmental nature. The overall effect is curiosity into why the two ends have been linked together in the installation. This work could have tottered unpleasantly but instead gives a balanced effect of query.

Walt Whitman in his poem “Song to Myself” wrote:

“Now I will do nothing, but listen
To accrue what I hear into this song,
To let sounds contribute toward it.“

In his writing, Whitman was reflecting of communion amongst individuals, that “what I assume, you shall assume”. He was also reflecting that one must look inward, to do nothing, to listen, and put this documentary evidence of humanity into a collective file for reference in trying to grasp one’s and each other’s response to life’s events and situations. The directive from this poem best achieves an insight of Carr’s solo exhibition.

The four gallery spaces where the installations occupied were a cocooned womb of subdued lighting. It was soothing, it was relaxing and it also supported a sense of heighted sensory awareness. The first piece encountered was “Construct”. A wood and glass phone booth type shelter of four individual seating areas complete with head phones, control buttons and a glass viewing window directly in front of a seat. There were no directions or guidance on how to utilize the arrangement.The first decision was to sit down, then to put on the head phones, then to turn and twist the buttons. Whether one wished to engage others sitting in opposite or adjacent booths was a personal decision and also depended on if others were present and willing to play. The headphones produced a child endless recitation of the Letterland alphabet amid construction sounds of lumber being sawed, dropped and moved with accompanying foot fall. The silver knob manipulated and controlled the illumination and brightness in the different booths with images of one’s self projected across to opposite panes of glass due to a central lens in the centre of this quadrant. What was fascinating about this interactive piece was how long each individual took to learn the process of the booth and more importantly how long or if at all, did they choose to interact with others in their own process of self-discovery. It was an experiment of human nature, of curiosity, of a child’s voice inviting the process of discovery, play and construction. An experiment with countless results as varied as the people who occupied the seats. 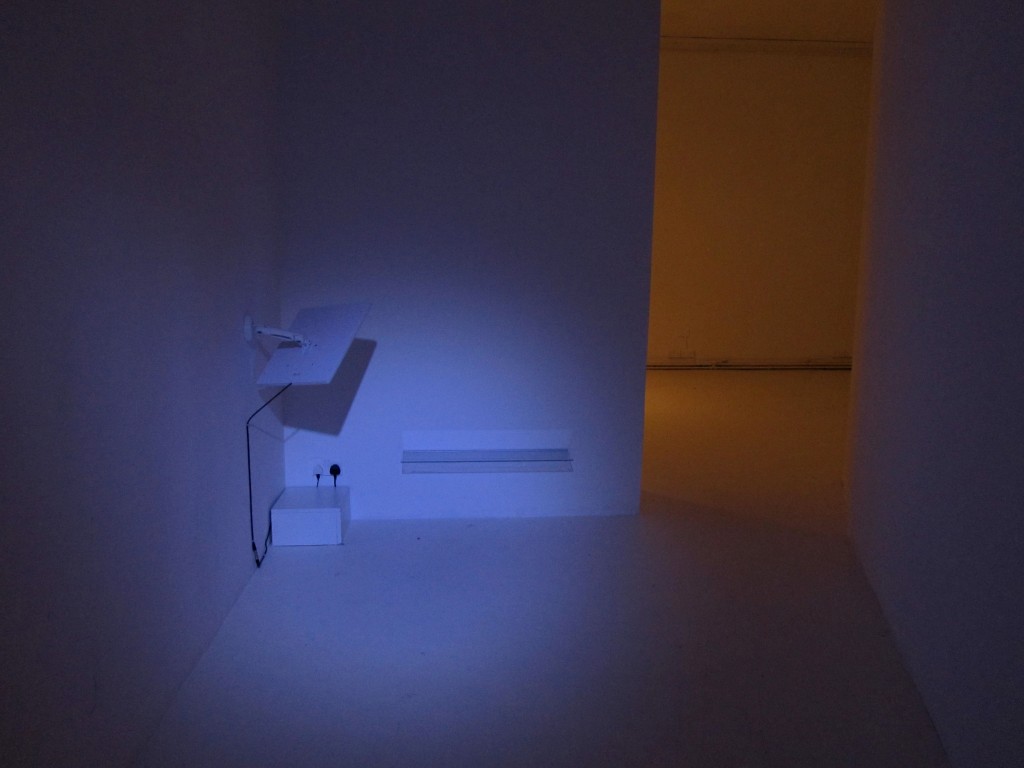 Turning into a small corner of a hallway was “Returning Solid”. The slim 15 inch glass shelf, positioned twelve inches off the floor was the only thing adorning the wall. Subtle lighting emphasised this transparent material. An amplified type object opposite the shelf produced the sounds of wind and trickling water though these felt as if they were floating in air. On the first exposure to this piece, it was almost possible to imagine a small creek flowing off the glass and into air. Because of its complete lack of symbolic referencing, a mental void occurred. The viewer either dismissed this work walking past it or paused, stepping back a bit in puzzlement to question, to reconcile what the eyes saw and the ears heard. It was simplicity of an extreme and hauntingly beautiful. 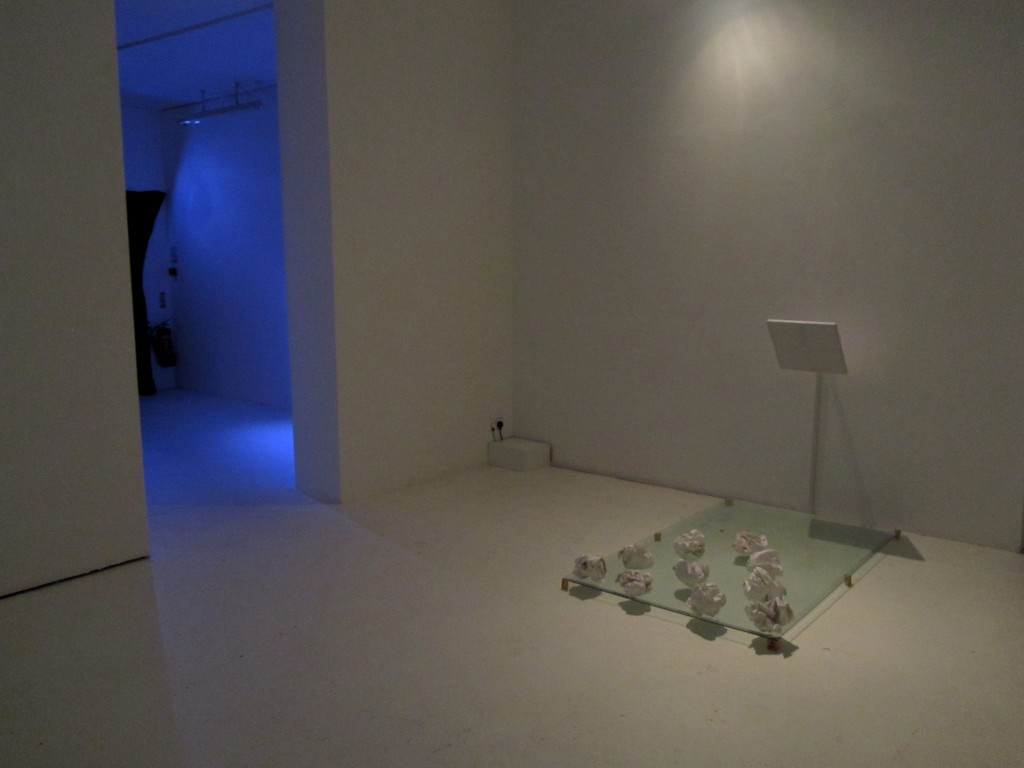 Progressing further into the gallery, in a large space all to its self was a creation which became the triangular ten point symbol on the accompanying exhibition publication. Titled “Residual Error”, it involved ten crumpled balls of paper placed on a transparent slab that lay on the floor. The balls of paper were consciously and specifically placed in a bowling ball formation and begged to be picked up, moved about and repositioned. There was the sound of paper ripping, the ear asking the mind to visualise these paper spheres being formed. Listening to the material being torn apart perhaps encouraged deconstruction. The idea was tempting for a child or an adventurous adult to move these balls of paper about the space or even to another room! This reviewer imagined the gallery caretakers would no longer find a ten point triangular formation in the room by the close of each day, but as in a game of probability, they would appear in different areas and locations for the duration of its presentation. 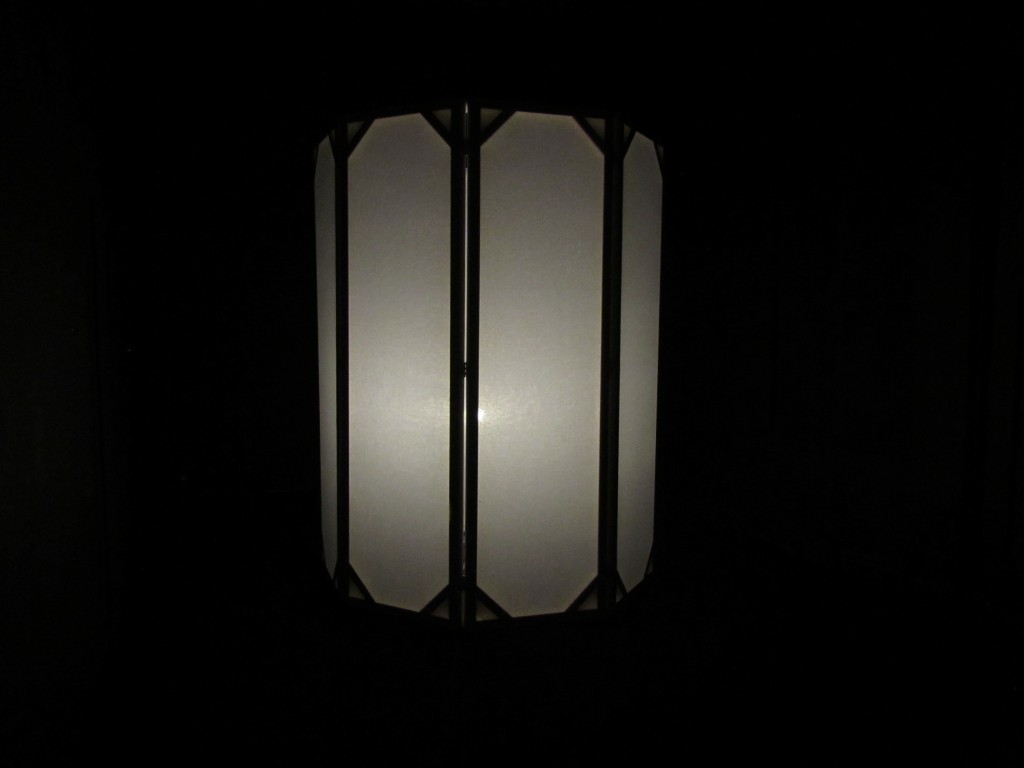 Play it by Ear, installation view 2015

At the very back of the gallery, marking the end of the installation pieces was the work from which the exhibition claimed its’ name, “Play it by Ear”. Even before the viewer entered the area of the work, it was able to be heard. Like a beacon, the sound lured an individual towards it; unnerving, distressing, unable to be identified as human or animal with an impression of dripping liquid amongst the droning hum. Blackened walls with an octagonal screened shape, centrally positioned, created a shrine like atmosphere in the room. The eight sided form was internally lit but no access was available. At once terrifying, but with the soothing gentle light softened by the screen, a wash of curiosity prevailed to investigate. While the other pieces in this exhibition were playful, this acoustic structure was most decidedly not playful, but the contrast of the expectation and the encounter created its own sense of humour or amusement.

Roger Scruton in an essay on the ontological theory of sound states that sounds are “pure events; secondary objects whose existence, nature, and qualities are all determined by how things appear to the normal observer”. In a very simplistic summation, this links well with Whitman’s more poetic observation that one needs to listen, to collect the song of one’s self, the perception of what one hears to understand how it is perceived, “what I assume, you shall assume”. Richard Carr skilfully challenged how we allow sound to influence what is seen within the context of his art practice and first solo exhibition.