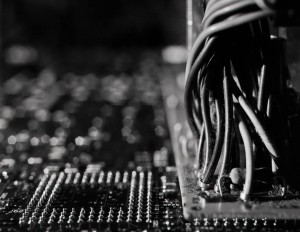 “Thrones and dominions” the Finn said obscurely “Yeah, there’s things out there. Ghosts, voices. Why not? Oceans had mermaids, all that shit, and we had a sea of silicon … ”

How will our present technological moment be perceived from the perspective of the future? In our anthropocentric era where evidence of human-driven climate change mounts and rumours of the coming singularity abound, can we be confident that our steady rate of scientific progress won’t suffer a rupture? What fictions will be created to fill the resultant gaps? What myths will emerge from the residue of the information age?

Lost State sets out to explore these questions using as its starting point a series of photographs shot from the imagined point of view of future archaeologists exploring the technological detritus of our time. A fractured speculative narrative alludes to the circumstances and significance of this discovery and invokes memories of human-technological mourning and loss. A digitally generated film simulates this imaginary exploration in order to question how image production technologies shape our perceptions of the past and of the future.

The work aims to trouble the boundaries between various categories: the organic and the inorganic; the imagined future and the perceived past; the human and the technological; the analogue and the digital; the secular and the sacred.

Also opening in Gallery 1 on the same evening is Elaine Hoey’s award-winning VR artwork, The Weight Of Water. Both exhibitions will be opened by Fiach Mac Conghail, CEO, The Digital Hub. Launching on the night will also be the inaugural Draíocht Visual Culture Award for a Graduate of the Creative Digital Media Programme at the Institute of Technology Blanchardstown.

Hugh McCabe is a Dublin-based lecturer, musician and artist. He is graduate of the MA ‘Art In the Contemporary World’ course at NCAD and teaches critical theory and 3D graphics at the Institute of Technology Blanchardstown.

Suzanne Walsh is an artist, writer and musician whose cross-disciplinary work moves between the literary, music and art worlds. Suzanne is also a graduate of the MA ‘Art In The Contemporary World’ course. She is currently a resident artist at Fire Station Artists’ Studios.