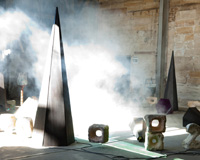 Panto Collapser is a solo exhibition from Australian artist Mikala Dwyer. ‘An exploded and bewitched house with a floating roof’ – is how she describes it, an exhibition that marks the first time her work will be shown in Ireland.

Dwyer ascribes deep symbolic meaning to the objects and artifacts she works with, evoking them as spiritual signifiers and using them to herald a community. A significant Australasian artist, Dwyer’s art work is increasingly relevant to a younger generation of artists who have emerged in Dublin in recent years. The installation will include a variation on one of her most recognizable and personal circle accumulations of sculptures, as well as an actual floating ceiling.

To coincide with Mikala Dwyer’s exhibition, Project Arts Centre will inaugurate a new experimental portal – the Grotto – with an installation by Richard Proffitt (UK): with We Sell Soul Richard Proffitt will work with the idea of the cabinet as a ‘kiosk’, a personalised space, and a psychedelic cabin full of hippie memorabilia, tropes of counterculture, the occult and Vietnam paraphernalia.