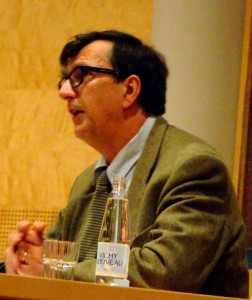 World-renowned philosopher and anthropologist, Bruno Latour, is speaking at the Science Gallery Dublin on Monday February 20th at 6pm. Latour is the founder of actor-network theory and a hugely influential figure in contemporary philosophy and science studies.

Born in 1947 in Beaune, Burgundy, from a wine grower family, Bruno Latour was trained first as a philosopher and then an anthropologist. From 1982 to 2006, he has been professor at the Centre de sociologie de l’Innovation at the Ecole nationale supérieure des mines in Paris and, for various periods, visiting professor at UCSD, at the London School of Economics and in the history of science department of Harvard University.

He is now professor at Sciences Po Paris where he is also the vice-president for research of that school.

After field studies in Africa and California he specialized in the analysis of scientists and engineers at work. In addition to work in philosophy, history, sociology and anthropology of science, he has collaborated into many studies in science policy and research management. He has written Laboratory Life (Princeton University Press), Science in Action, and The Pasteurization of France. He also published a field study on an automatic subway system Aramis or the love of technology and an essay on symmetric anthropology We have never been modern. He has also gathered a series of essays, Pandora’s Hope:Essays in the Reality of Science Studies to explore the consequences of the ” science wars”. After having directed several thesis on various environmental crisis, he published a book on the political philosophy of the environment Politics of Nature (all of those books are with Harvard University Press and have been translated in many languages). In a series of books, he has been exploring the consequences of science studies on different traditional topics of the social sciences: religion in On the Modern Cult of the Factish Gods, and Jubiler ou les tourments de la parole religieuse, and social theory in Paris ville invisible, a photographic essay on the technical & social aspects of the city of Paris (available on the web in English Paris Invisible City). After a long field work on one of the French supreme Courts, he has recently published a monograph la Fabrique du droit-une ethnographie du Conseil d’Etat (also now in English). A new presentation of the social theory which he has developped with his colleagues in Paris is available at Oxford University Press, under the title: Reassembling the Social, an Introduction to Actor Network Theory.

After having curated a major international exhibition in Karlsruhe at the ZKM center, Iconoclash beyond the image wars in science, religion and art, he has curated another one also with Peter Weibel Making Things Public The atmospheres of democracy which has closed in October 2005 (both catalogues are with MIT Press).

While in Sciences Po, he has created the médialab to seize the chance offered to social theory by the spread of digital methods and has created, together with Valrie Pihet a new experimental program in art and politics (SPEAP).

Having been awarded and ERC grant to pursue an inquiry into modes of existence, he is now for three year engaged into the making of this collaborative digital platform.

Admission to this event is free and can be booked here.