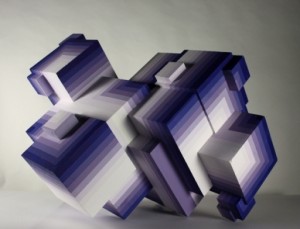 Persistence of vision is a phenomenon of the eye in which an afterimage is believed to last for approximately one twenty-fifth of a second on the retina. This exhibition by Richard Forrest is an examination of how one’s mind and senses respond to imagery – video, sound and sculpture. In turn the work attempts to subvert our perceptions of digital technologies.
In his current practice Forrest explores a relationship with technology by making, hacking, glitching and subverting assumed uses of digital media. Persistence of Vision aims to simultaneously challenge and excite the senses.
Richard Forrest was chosen by the Joinery as part of the 2011 graduate programme.
——————
Richard Forrest (born 1988, Youghal, Co. Cork) at present, lives in Cork city where he is currently working as a practising artist. He graduated from the Crawford College of Art and Design in 2011 with first class honours in his studio practice. Forrest is a founding member of Sample Studios. He also works as a gallery facilitator in the Lewis Glucksman Gallery. In 2011, he was awarded the Tyndell Purchase prize, the CIT Registrars Prize: Research Bursary, the Ciaran Langford Memorial Bursary Award (6 month residency at Backwater studios), the Cork Printmakers Studio Bursary Award and the Joinery Graduate Selection Prize for his work at last year’s Crawford degree show exhibition, C:/forward. Forrest’s practice is multi-disciplinary. It frequently incorporates sculpture, video, image and sound art.