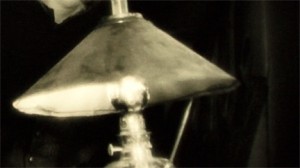 A new exhibition by Teresa Gillespie will run at the Joinery from Thursday until Sunday of this week. A public talk with Teresa and Tina Kinsella closes the exhibition on Sunday. Details below from the Joinery website:

Among Objects explores part of Vivian Sobchackʼs essay, The Passion of the Material, where she considers her idea of interobjectivity through three films: Babetteʼs Feast (Gabriel Axel, 1987), Therese (Alain Cavalier, 1986) and The Diary of a Country Priest (Robert Bresson, 1950).

Distancing herself from the larger narratives of Babetteʼs Feast, Therese and The Diary of a Country Priest, Teresa Gillespie engaged with the films primarily as material objects; cutting, zooming and remixing them as a means to focus on the interobjective content. Out from the editing process a collection of objects and relations emerged to create three environments that will occupy the three zones of the Joinery. Each of the three environments will consist of a combination of sculpture, video and sound.

Teresa will be in conversation with Tina Kinsella on Sunday 22nd April at 4pm.

Teresa Gillespie is a graduate of Glasgow School of Art and the Royal College of Art, London. She has exhibited in Ireland and internationally and undertaken numerous artistʼs residencies. In 2011 she worked on a curatorial project Portrait of Space and a solo exhibition, ʻalong the borderland bendsʼ at The Return Gallery.

Tina Kinsella is in the final year of her Ph.D research on the theoretical writings and art practice of Bracha L. Ettinger at NCAD. She lectures part-time in NCAD on Visual Culture. In 2009 she completed an M.Phil in Gender and Women’s Studies at Trinity College. Her research interests include the dynamics of ethics and aesthetics in the artistic encounter. Tina and Teresa will talk about their shared interest in interobjectivity.