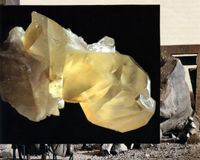 New group exhibition curated by Tessa Giblin and Kate Strain opens at the Project this Thursday. The following details are from the Project website where you will also find further such details:

Whitewashing the Moon is based on a short story by Edward Everett Hale, originally published in 1869. It tells the tale of the men and woman who conceived of the first recorded imagining of a satellite in orbit, and the events that unfolded as they eventually went about creating a ‘Brick Moon’. As well as being a scientifically advanced concept for its time, the science-fiction fantasy that evolved through the story also creates an extraordinary transformative effect.

This transformative concept is at the centre of Whitewashing the Moon, in which a garden of sculptures, photographs and other material installations communicate a similar potential for objects. The works of Caroline Achaintre, Jorge De la Garza, Eleanor Duffin, Barbara Knezevic and Raphaël Zarka all explore in different ways the transformative potential of objects and ideas.