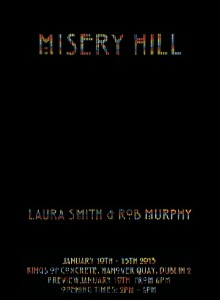 A screening of Smith’s 2010 piece how this works will take place on Saturday 12th January from 5pm.

Misery Hill is an exhibition of recent work by Laura Smith & Rob Murphy, recent graduates of the MA ACW programme at NCAD, which brings together video, sound and text. The work responds to questions about the nature of corporeal and social life and considers the limits and the significance of human agency.

Room One
buzz kill : Rob Murphy
Murphy’s installations are reminders of the inherent weirdness of objects; their subterranean baffle and our ‘stuckness’ at them.

Rob Murphy graduated from IADT Dún Laoghaire in 2011 with a degree in Visual Arts Practice. Murphy is co-director/founder of artist run Flat_Pack Gallery & Studios in Smithfield and took part in its inaugural exhibition Your Cruelty in September 2012.
http://robmurphy.ie/

Room Two
they have idealistic notions of being : Laura Smith
Working in moving image, Smith’s practice explores the difficulty of assessing contemporary political realities. Through a combination of narrative, documentary and staged actions, her vignettes consider the existence of personal contribution to the political.

Laura Smith graduated from Dublin Institute of Technology in 2010 with a BA (Hons) degree in Fine Art. Smith’s video work The alternative is…, was selected for exhibition in EVA International Exhibition in Limerick in 2012. More recently, Smith exhibited The alternative is… for the Radio Joinery programme in the Joinery gallery, Dublin 7.
http://laurasmithart.wordpress.com/