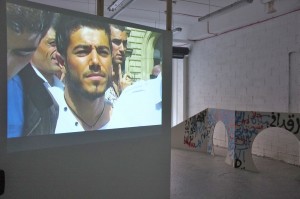 The inaugral exhibition by the FLOOD project, curated by Paul McAree, is still running at Unit 3, James Joyce Street, Dublin 1 and continues until the 26th of January. It features work by Suzanne Treister, Jim Ricks, Sean Lynch, Maryam Jafri and Stephen Gunning. Full details below:

Taking it’s lead from Killing Joke’s 1979 song Turn to Red, which sought to document the spirit of the atomic age, this exhibition features artists whose work on the one hand reflects a heightened sense of awareness of the social and political dynamic within which we live, while on the other uses an economy of means and an awareness of materials influenced by the subject matter.

Stephen Gunning’s Mayday, a video work shot in Paris in 2011, documents the May Day political demonstrations in Place de la Nation. The square is the assembly point for other street parades and causes that are present today, namely those which have been external to France, such as the Kurds, Tamils, and Africans, particularly from Tunisia and Morocco. Perhaps witnessing recent changes across North Africa and the Middle East to bring democratic change to their countries, the day became less about labour-related changes than about celebrating human rights in general.

Maryam Jafri’s Nogales pairs a single 35mm slide-image of the walled town of Nogales, divided along the US/Mexican border, with an audio recording of Ronald Reagan’s famous speech at the Berlin Wall in 1987, “Mr. Gorbachev, tear down this wall!” Twenty years later, Reagan’s own country, is erecting a border wall to keep out ‘illegal’ immigrants from Mexico and Latin America. The result is a series of divided towns, with family members, neighbourhoods and entire communities cut off from one another.

Sean Lynch’s The Bandits Live Comfortably in the Ruins is a presentation of archival news footage of the 1989 demolition of Rank’s Mills, the mainstay of the local Docklands industry, in Limerick. Farcically, repeated attempts with dynamite to blow up the concrete structure failed, as the building remained standing. This attempt is played out over and over again in this format, as a structure that seems to defy its own destruction.

Jim Ricks’ The Man With The Golden Gun is a specially created installation based on the media reportage of the death of Gaddafi. Ricks has recreated the drainage tunnels where the dictator was found and shot, re-presenting the location as a stage set. By openly imitating art and life through available means and materials he explores the grey area between flattery and theft, while re-wiring history into a new narrative.

Suzanne Treister’s Hexen 2.0 looks into histories of scientific research behind government programmes of mass control, investigating parallel histories of counter-cultural and grass roots movements. Hexen 2.0 charts, within a framework of post-WWII U.S. governmental and military imperatives, the coming together of diverse scientific and social sciences through the development of cybernetics, the history of the internet, the rise of Web 2.0 and increased intelligence gathering, and the implications for the future of new systems of societal manipulation towards a control society.

FLOOD is a project curated by Paul McAree. FLOOD is based at the James Joyce Street location until May 2013, during which time it will present 3 exhibitions. Previous projects include a commissioned publication by artist Kevin Atherton, and projects with Theresa Nanigian, Terry Atkinson, and Flávia Müller Medeiros.