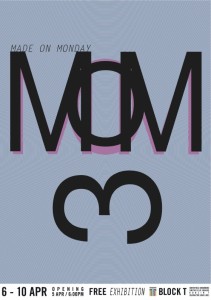 Rather than a thematically driven exhibition, Made on Monday III, takes as it’s starting point the artists themselves, and the professional relationships that they hold in common. This exhibition surveys the work of twenty-nine artists, all of whom are involved in the show, by association of working in various capacities at the Irish Museum of Modern Art.

Made on Monday III forms part of an ongoing series of exhibitions based on the creative endeavours of collective staff members. The first of theses exhibitions took place at Broadstone Studios, September 2008, and subsequent show at The Complex, Smithfield, November 2010. Given that IMMA is closed to the public on Monday’s, many staff are not scheduled to work on that day, and subsequently spend time in the studio focusing on their individual artistic practices – thereby attributing the logical and witty title, Made on Monday, to the show.

This exhibition takes the form of an open submission, in which all staff are eligible to propose work, and is curated by Rowan Sexton, a former member of IMMA staff. It incorporates the work of a diverse group of contemporary artists in a broad range of disciplines, including ceramics, drawing, installation, painting, photography, print, sculpture and video.

Alongside the considerable effort it takes to sustain a career as an artist, the visual arts in general are facing continued obstacles, and both artists and institutions are under increased pressure to manage substantial budget cuts and the wide-ranging impact on their livelihoods. With the country rocked by recession, a dramatically changing societal landscape is emerging, with the demise of numerous businesses a sad reality of the economic downturn. As a consequence, there is an abundance of empty spaces littering the country. Rather than leaving neglected properties to fall into disrepair, enterprising arts groups have begun to explore feasible alternatives that can be employed to alleviate the negative decline.Creative ventures including pop-up projects and one-off events in reclaimed venues are becoming a regular feature in cultural circles. The visual arts have profited from these changed circumstances, and increasingly exhibition and studio spaces are adopting new, non-traditional locations, such as the exhibition setting itself, BLOCK T. The exhibition venue provides the surroundings for this large group of artists to showcase dynamic work from their respective practices.The show will highlight a range of individual sensibilities and artistic perspectives, and promises an eclectic, multimedia selection of work from contemporary artists working in Ireland.

Made on Monday III will be officially launched by Sarah Glennie, Director of the Irish Museum of Modern Art, on Friday 5 April 2013 at 6pm. The exhibition continues until 10 April.