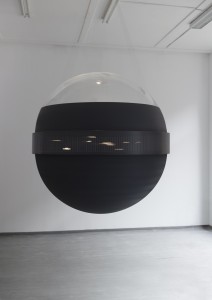 Ulrich Vogl’s most recent body of work focuses on sculptures that are – either in themselves or in their projection – films. Like in previous works Vogl uses movement, light and shadow to capture a suspension of reality and space.

Among the sculptures in of clouds and strings is the Wolkenfilmmaschine (2013) where Vogl combines the early film techniques of the carousel with a moving mobile inside a rotating ball. Film (2012/2014) works with a turning wheel made from wire and its projection references the essence of early black and white movies. Both works are examples of Vogl’s approach; time-based, playful, simple in their creation. In their simplicity they create their own magic – thus giving space to the viewer’s own association, the viewer’s own film.