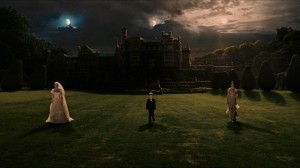 In conjunction with the current exhibition Isabel Nolan : The weakened eye of day, IMMA invites you to a special screening at the IFI of Lars von Trier’s film portraying a sibling relationship in the shadow of impending disaster as the planet Melancholia hurtles towards Earth.

As an integral part of Isabel Nolan: The weakened eye of day there will be a series of talks by guests, on subjects ranging from cosmology to philosophy. This film screening, along with a related programme of talks and lectures, are part of the on-going investigative enquiries that inform The weakened eye of day and Nolan’s practice. In the context of Nolan’s exhibition at IMMA, Francis Halsall (Lecturer, MA – Art in Contemporary World, NCAD) will give a short introduction. See further information about the film Melancholia below.

How would Lars von Trier follow the eye-popping AntiChrist ? With a chamber drama about bipolar disorder and world destruction but of course. A mesmerising opening salvo delivers Kirsten Dunst iconic in close-up, lashing rain, clashing planets and Wagner’s Tristan and Isolde. Meanings and connections fall into place from then on, as an obviously troubled Dunst attends a plush wedding hosted by her filthy rich family. Charlotte Rampling is a beastly mum, dad John Hurt a charming gadfly, and sibling Charlotte Gainsbourg seemingly the only sensible one. She can’t quite explain away increasingly forlorn Dunst’s aching fears though, not least when a rogue planet approaches on a collision course with Earth. Von Trier conveys to perfection the woozy dislocation experienced by those gripped by the black dog of melancholy, adding strong performances and painterly effects to the mix. As a sufferer himself, it’s an obviously personal project for the great Dane, and quite possibly the most sincere film he’s ever made.