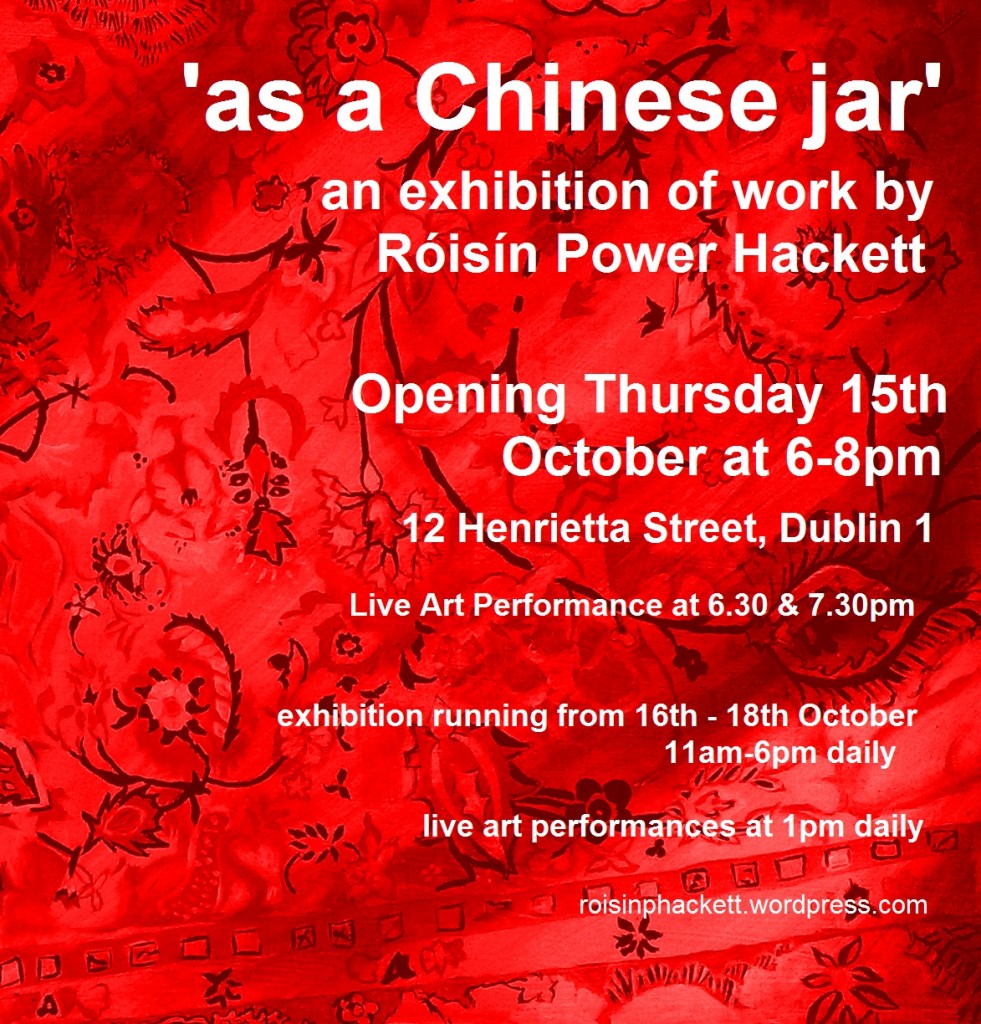 ‘as a Chinese jar’, is the first solo exhibition of the visual artist and poet Róísín Power Hackett. Róisín received an MA in Art in the Contemporary World (2013) and a BA in History of Art and Fine Art (Paint) (2012) from the National College of Art and Design in Dublin. She is currently a member of Brunswick Mills Studios, Dublin.

‘…as a Chinese jar still moves perpetually in its stillness’*

‘as a Chinese jar’, is an exhibition of paintings and a live art performance that takes its name from a line in the T.S Eliot poem, ‘Burnt Norton’. These lines speak of the patterns on a Chinese jar and how they repeatedly seem to move, despite being fixed motifs. This can be taken as an example of the rhythms and energy in life and the world. In her paintings and performance Róisín questions peoples’ relationships with their surroundings, depicting an abundance of intricately patterned wallpapers or rugs and blurring the edges between the person, their clothes and their environment. Through her use of visual patterns, she aims to express the similar energies between people and their environments or societies. She portrays historical characters, both real and fictitious, as well as her peers. Her characters blend into their backgrounds, absorbed and influenced by their respective societal norms, they either almost disappear or fight to be seen and heard. In ‘as a Chinese jar’, Róisín focuses on the power relations between the genders as well as between the rich and the poor. Her work highlights how women are regularly oppressed, pressured into submission and made to fade into the wallpaper. Many of her works are inspired by films and literature such as Tess of the d’Urbervilles by Thomas Hardy, Jane Eyre by Charlotte Brontë and Anna Karenina by Leo Tolstoy.
The exhibition will take place in the red room on the ground floor of 12 Henrietta Street. During the opening night Róisín will wear her own dress design and perform. All are welcome.