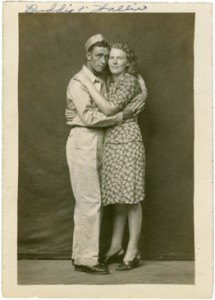 Two new exhibitions open at the Douglas Hyde on Thursday evening of this week. Gallery 1 hosts a photography exhibition by Mike Disfarmer, while Gallery 2 contains paper-based work by Kouzaki Hiromu.

Mike Disfarmer, born Michael Meyer in 1884, changed his name to distance himself from the community in which he grew up, even going so far as to claim that he’d been blown into the family home by a tornado. For over forty years he was the local photographer in Heber Springs, Arkansas, making inexpensive studio photos to satisfy the needs and whims of his rural neighbours; in doing so he developed a distinctive style and well-honed sensibility which made him one of the masters of American portrait photography.

At first, many of Mike Disfarmer’s photographs seem familiar; they bring to mind well-known images of southern American communities in the Depression years. A closer look reveals their singularity: these are portraits of people who are happy to have their pictures taken and are content to pay for them. They are people who are keen to impress and look their best, because the photos were made to be shared with family, friends, and sweethearts.

There is no artifice or guile in Disfarmer’s images, and they can be unforgiving in their scrupulous gaze. And yet – this explains much of their beauty – they can be full of grace and dignity, just as they are unwavering in their tolerance and acceptance of difference. They are also, at times, curiously sensuous photographs. Surprisingly, because their maker was a loner and outsider, these photographs are about connectedness. They are a form of friendship.

Kouzaki Hiromu, the grandfather of the exhibition title, was born in 1902 in Japan. He learnt carpentry at the age of 15 and eventually became a master builder. As an elderly man of 80, partly to keep his hands busy, he began to make envelopes from used paper that he found around the house, and soon this activity took over his life. He made envelopes almost incessantly. When he died, at the age of 95, the family put paper into his coffin so he could go on producing them.

The envelopes, made from used and unwanted materials (in much the same way as the Japanese boro that were shown in Gallery 2 some years ago) are not artworks, but neither are they exactly everyday objects for use. What is most remarkable about them, apart from the silent, diligent, and obsessive manner in which they were made, is their wonderful simplicity and humility – qualities that are not much in evidence in our materialistic world.

Fujii Sakuko, Kouzaki Hiromu’s granddaughter, was responsible for bringing these beautiful artifacts to public attention in Japan, where they have been exhibited on several occasions. She also produced a book about them, which will be for sale at the exhibition.