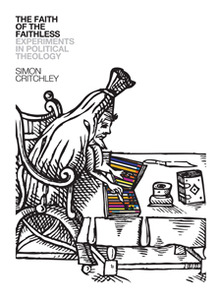 March 29, 2012
GradCAM have organised philosopher Simon Critchley and psychoanalyst Jamieson Webster to speak at the Dublin Unitarian Church at the end of March. Critchley’s talk is entitled Faith Of The Faithless and Webster will be speaking about The Life And Death Of Psychoanalysis. It’s a free event but strongly advised that you book your place by emailing edia.connole@gradcam.ie. Full details as follows:

Somehow, the secular age seems to have been replaced by a new era, where political action flows directly from metaphysical conflict, and Simon Critchley asked how we might respond to this change. Should we defend a version of secularism, quietly accept the slide into a form of theism—or is there another way? From the paradox of politics and religion in Rousseau to the return to St. Paul in Taubes, Agamben and Badiou, via explorations of politics and original sin in the work of Schmitt and John Gray, Critchley examines whether there can a faith of the faithless, a belief for unbelievers.

Simon Critchley is Hans Jonas Professor of Philosophy at the New School for Social Research in New York, and a part-time professor of philosophy at Tilburg University in the Netherlands. His many books include Faith of the Faithless, Very Little…Almost Nothing, Infinitely Demanding; Ethics-Politics-Subjectivity; and The Book of Dead Philosophers.

Jamieson Webster argues that the life and death of psychoanalysis hinges on the question of desire itself, and attempts to bring this question back to the center of psychoanalytic thought and practice. Blurring the line between the personal and the theoretical, and in conversation with the works of Lacan, Adorno, and Badiou, Webster offers a novel interpretation of the philosophical and psychoanalytic meaning of desire and explores how, through the difficult work of transference and reading, one can live out the life of desire that tests the limits of what it means to be human.

Jamieson Webster, PhD, is a psychoanalyst in New York City. She teaches at Eugene Lang college and New York University. Her work focuses on clinical and theoretical psychoanalysis with an interdisciplinary focus on feminine sexuality, philosophy, and aesthetics.

This event is co-organized and chaired by Edia Connole and Tina Kinsella, and is from a series of events initiated by Connole, Kinsella and Clodagh Emoe to mark GradCAM’s fourth year of activity. Visit www.gradcam.ie for more information.

This is a free public event, however, spaces are limited, and booking is strongly recommended. Please send an email to edia.connole@gradcam.ie to reserve your place.