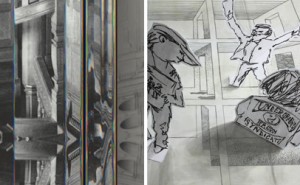 It’s all go on Thursday April 12th. Also opening is the new exhibition in Temple Bar Gallery and Studios, entrance, entrance, which is curated by Isobel Harbison. The exhibition is an exploration of the modern image that features work by Alan Butler, Gabriele Beveridge, Juliette Bonneviot, Mick Peter and Peles Empire (Katharina Stoever and Barbara Wolff). There is also an associated film sreening on June 2nd at 2pm that includes work by Trisha Baga, Antoine Catala, Mark Leckey, Helen Marten, Clunie Reid and Jordan Wolfson. The following details are from the TBG+S website:

entrance, entrance is an art exhibition focusing on the life of the modern image. Produced in droves, generated as news, presented as profile, extended among networks, exchanged for entertainment, traded as stock and distributed by ‘share’, the modern image rarely remains still. While visually it still has the power to captivate or entrance us, culturally it carries more. Images are icons, hosts and sellers, a smooth entrance to new ideas, brands or products. This exhibition proposes the modern image as an entrance way rather than an end unto itself and to reflect that, the gallery itself will become a reconfigured hallway with a range of new art works suggesting alternative entries or ultimate escape.

As part of an ongoing project, Peles Empire’s Katharina Stoever and Barbara Wolff will reconstruct their version of the entrance hallway to a Romanian castle built in 1874 at the foot of the Carpathian Mountains, from photographs they have taken there. Around it, a new work by British artist Gabriele Beveridge reveals the imprint that familiar advertisements have on our memory, and through careful rearrangement, she changes them into more perplexing forms. Irish artist Alan Butler reconstructs an animated icon from MTV’s first music video, cladding it with the real agit-prop signage from a more recent revolution. French artist Juliette Bonneviot scrutinises the details of a Russian raver’s branded tracksuit and brings the historical, political and visual nuances of its logo to light in a combination of both painting and sculpture. And British artist Mick Peter presents a new series of drawings where the founders of the ‘Underground Press Syndicate’ have been transposed into more abstract architectural spaces. His characters’ outlines have been sketched, cropped, cut, folded and subsequently redrawn, Peter’s process mimicking the compression and angled dissemination of information through media imagery that has developed since the syndicate’s formation.

Screening: Saturday June 2nd, 2pm.
In a special screening on 2nd June, recent moving image works by a range of artists will expand on the idea of image as entrance. Many of the works have been made in High Definition video or are rendered in CGI (Computer Generated Imagery) using contemporary technology to reflect the special texture of the modern image. Additionally, through careful casting, scripting and editing these works also highlight new aspects of its cultural, political and economic currency. Works by American artist Trisha Baga, French artist Antoine Catala, British artist and Turner Prize winner Mark Leckey, British artists Helen Marten and Clunie Reid and American artist Jordan Wolfson will follow a brief introduction by the curator Isobel Harbison