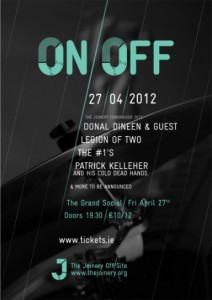 The Grand Social are hosting a fund-raising gig for The Joinery this coming Friday night. It features Donal Dineen, a rare set from the fantastic Legion Of Two, Patrick Kelleher, the #1’s and more. Well worth supporting. Full details as follows:

ON/OFF 27/04/12 – A Fundraiser for The Joinery at The Grand Social
Featuring Donal Dineen & Guest (live), Legion of Two, The #1s, Patrick Kelleher and his Cold Dead Hands & more to be announced

We are delighted to announce a fantastic lineup for this year’s Joinery Fundraiser on April 27th in The Grand Social. Following on from the successes of last year’s event we again feature performers, who in many respects embody The Joinery’s idiosyncratic values, none more so than Donal Dineen who will perform a live set with a yet to be announced guest.

Joining Donal on the night will be two of the most critically acclaimed bands of the last five years in Ireland, Legion of Two and Patrick Kelleher and His Cold Dead Hands. We are also delighted to introduce The #1’s. More acts are to be announced in the coming days.

This event is a fundraiser – monies raised will be used to allay some of the operating costs inevitable with running an alternative art space in Dublin. Tickets priced €12 (incl. booking fee) are available from www.tickets.ie