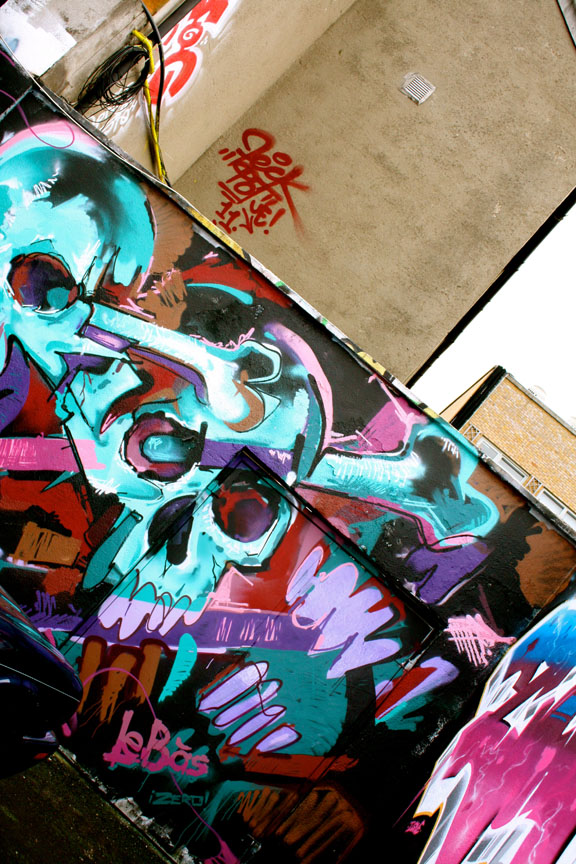 When I decided to come to Dublin, one of the first things on my mind was that I must tract down as much street art as possible. Coming from Vancouver, Canada and being aware of the massive movement of street art practices that has exploded with in Europe during the last 20 years made me eager to go out and find these masterpieces. Yes, Vancouver has street art, along with the rest of Canada, but compared to other parts of the world, it seems we have a lot of catching up to do. It might have something to do with the Canadian nature of not wanting to cause trouble…except when it comes to hockey, that’s different territory all together. Anyway, street art can and has caused a certain amount of trouble and debate; perhaps that is an aspect that keeps myself and many others interested in this form of visual culture.

Street art can be tightly associated with urban or street culture but as this art form has progressed its presence has expanded beyond the cityscape and gained commercial commoditization. The movement can be traced back to around the 1960’s in Philadelphia, where the first street tags have been recorded. The official birth of graffiti stakes a claim to New York with the visual take over of subway trains in the 1970’s and 80’s. From there, graffiti grew, was adapted and used to define an individual or gang’s territory. As it become popular within youth culture it was used as a form of rebellion and a voice of anarchism. Graffiti was anti-establishment and worked against economic and political systems. None the less, a certain code of conduct was established with in the graffiti community; an up and coming graffiti artist had to gain respect through the skill, presence and participation of certain codes of conduct with in their work.

Graffiti flourished around New York and angered those in political power but there was no stopping it. Bigger, better and more artistic graffiti styles developed as this art trend spread from New York through out the world. Graffiti started as a simple scribble of someone’s name to huge pictorial murals. The rules of the graffiti practice where stretched and broken which lead to the post graffiti movement of street art. Graffiti is still very much present but it has become a sub context of the larger heading of street art which includes, stenciling, paste-ons, stickers, street installations, paintings and so on.
Dublin has a variety of street art forms that can be found around the city. When I find areas with street art, it’s like finding treasure, no matter how big or small. The following images are a few examples of spots in Dublin; I think express some key motives for this art movement. 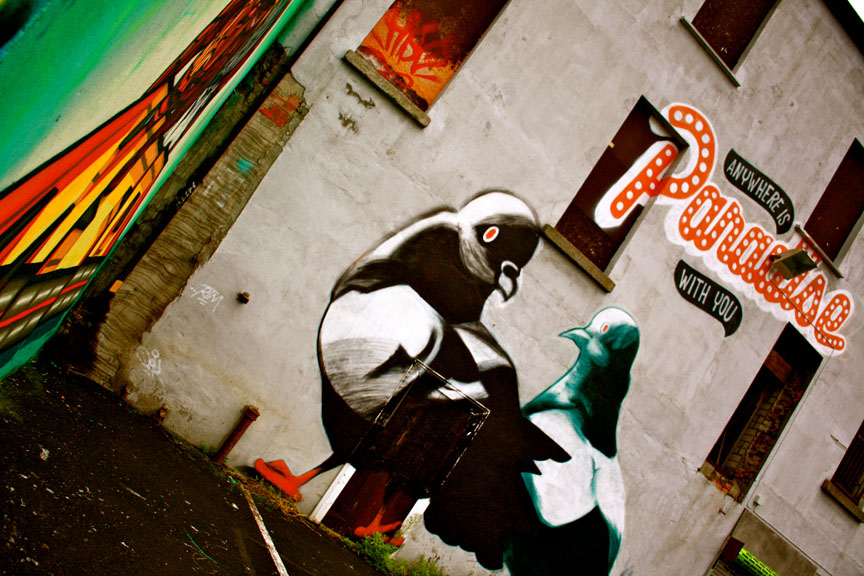 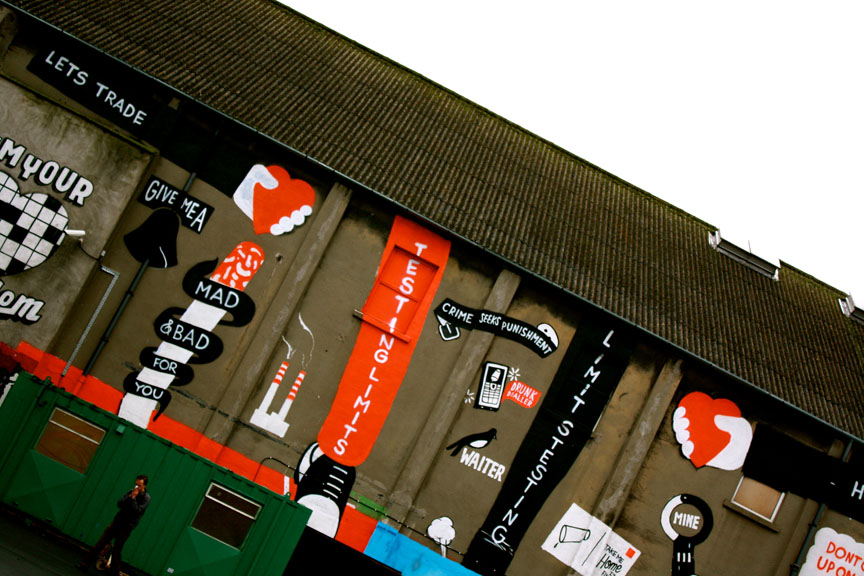 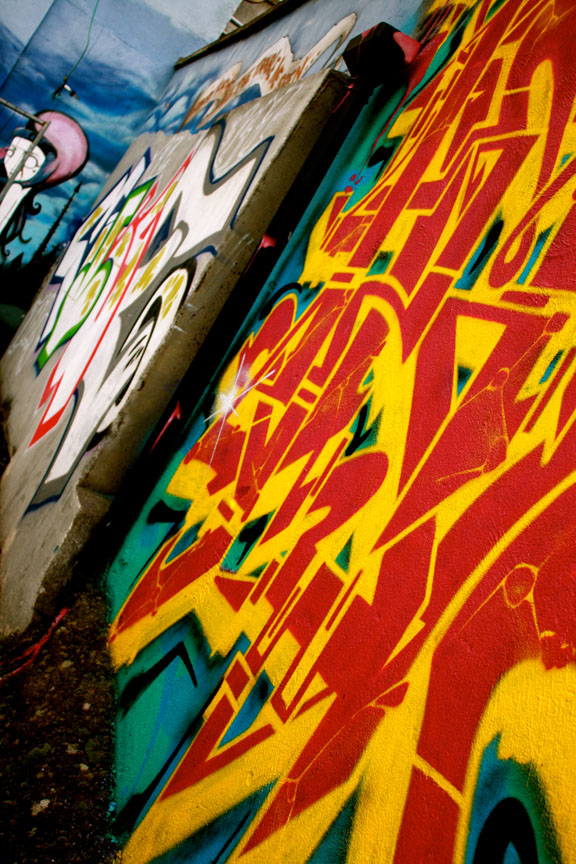 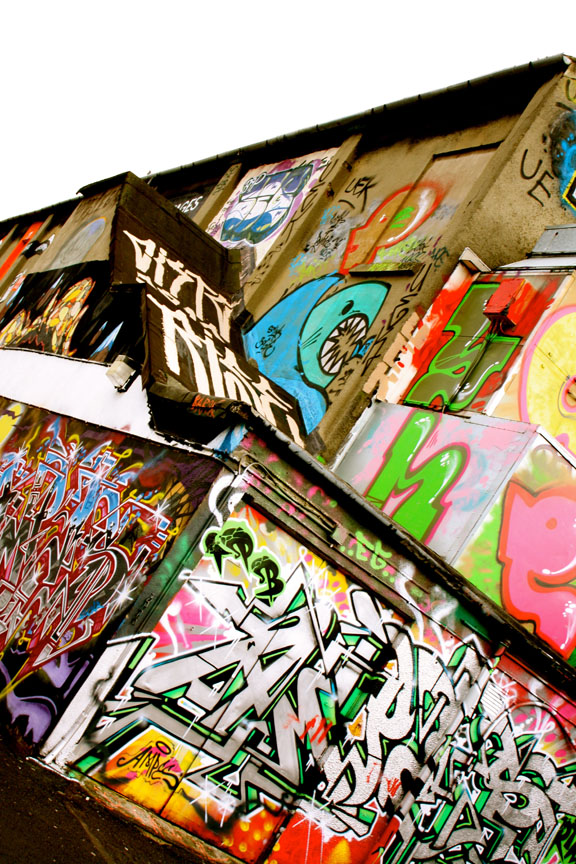 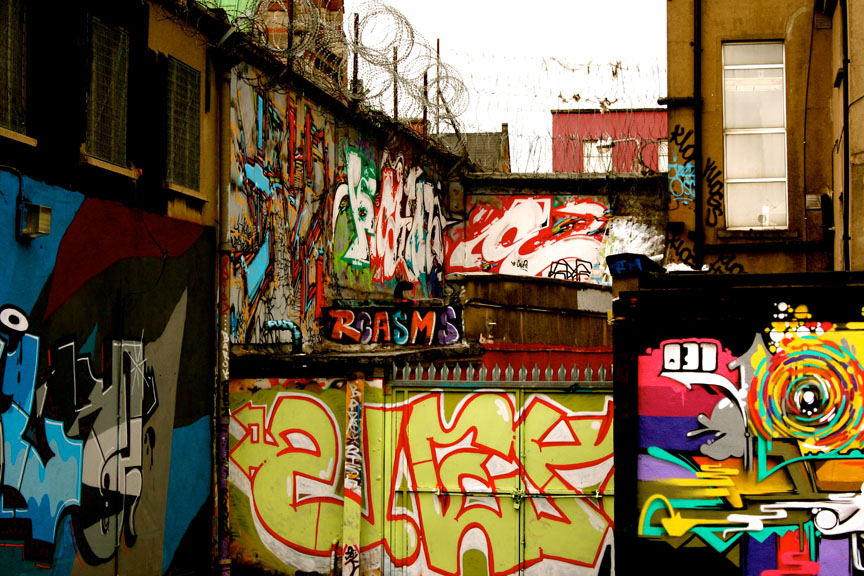 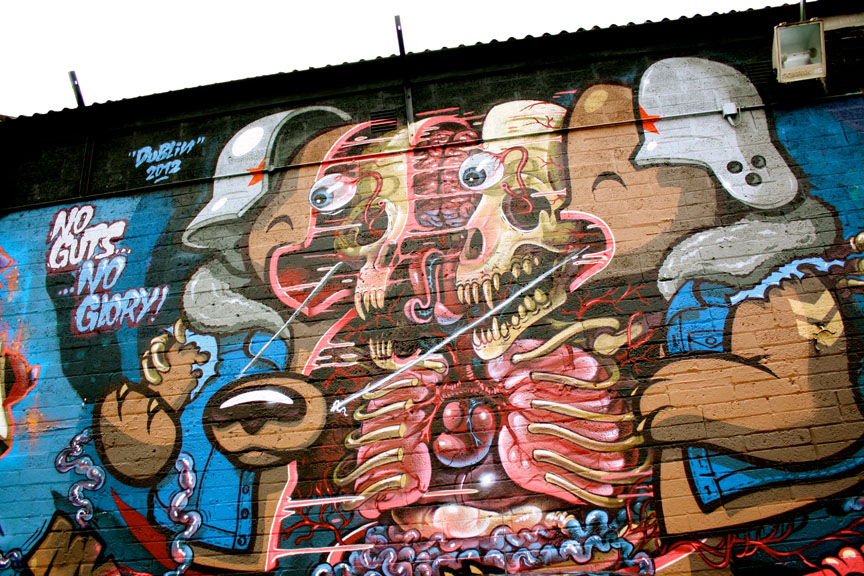 The above images are of works created in a parking lot outside of the Tivoli Theatre on Francis St. and as you can see there are a variety of street art styles within this location. It is really quite amazing to see, as this location is literally full of different styles and meanings within each piece. Street art usually can carry strong themes in regards to social, political or environmental views. With regards to graffiti works much of its motive is to continue the tradition of competing with other graffiti artists; creating more technically skillful and larger works compared to others. In addition, the rush one gets from creating legal works and satisfaction of spreading your style around the city. No matter what type of street art it is or what it may be expressing, all works challenge the notions of public and private space. 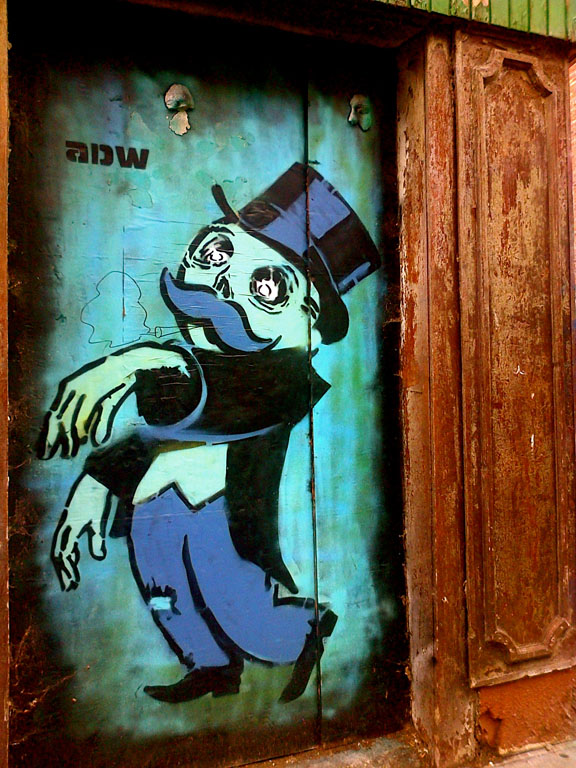 Above is another piece I found along Francis St. The monopoly zombie is one of ADW trademark stencils and he has created various politically charged works around Dublin.
The next few images are examples of a more discrete work that I found recently in Smithfield near the Cobblestone Pub. Street art can simply be a form of dressing up the banal or adding a bit of humor to your everyday environment. When I saw this work, it did exactly that for me. It was like a little pick-me-up or a “stop and smell the roses” type of moment. Granted not everyone will enjoy this work like I do but that’s apart of its charm. You may or may not notice it or understand why it was placed there and it just may not be there tomorrow. 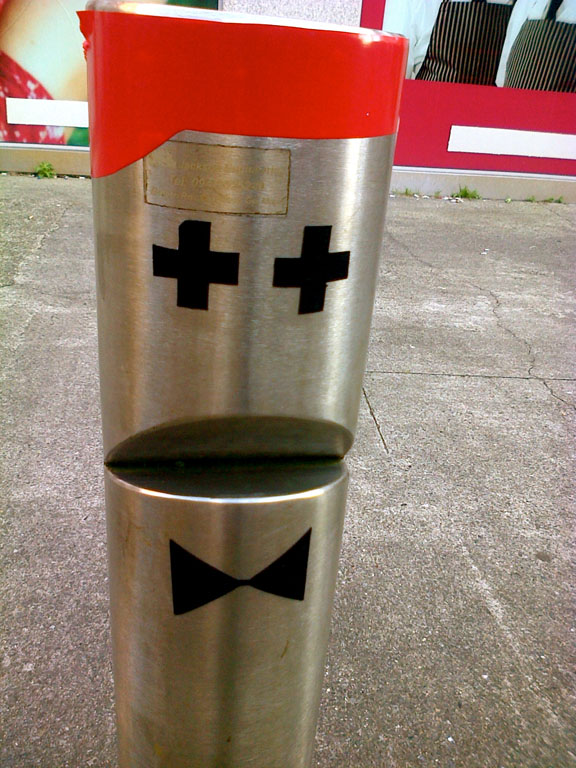 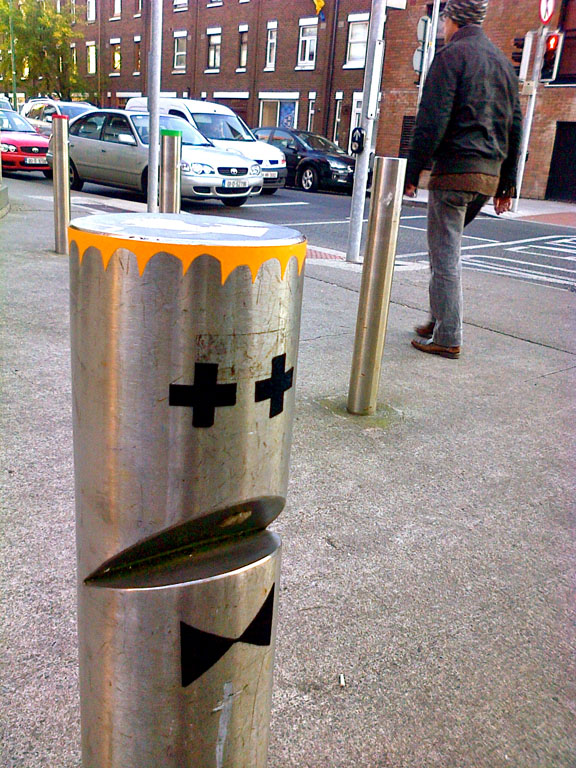 This next work is by DMC, another forerunner of the Dublin street art scene. These dripping female forms are signature imagery that DMC uses and can be found around the world. Hauntingly beautiful, these weeping women become part of the architecture in St. Andrew’s Lane. 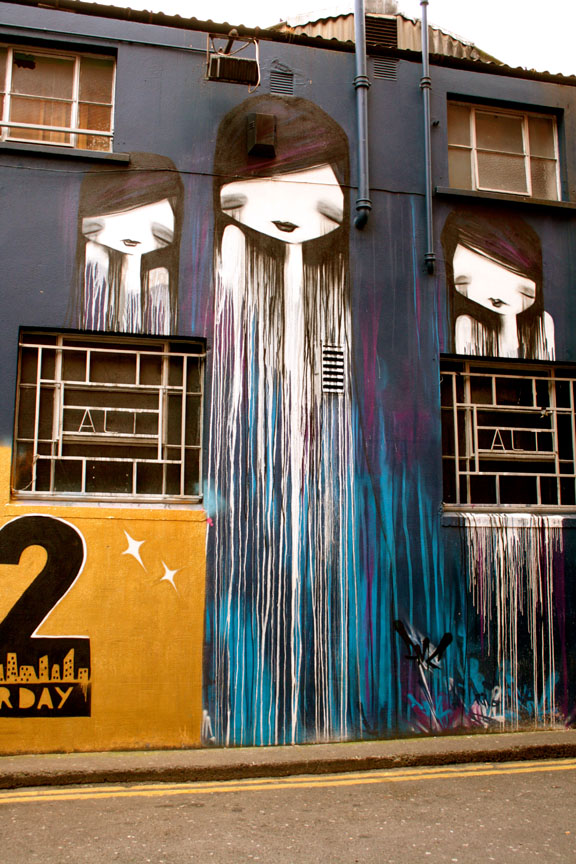 There is a lot more work I have found around Dublin so far and yet more to be found. I will hopefully continue to share my findings through out my time in Dublin. For now I will leave you with a couple quotes from Irish street artist, Will St. Leger, addressing Ireland’s street art development and the passing over of ownership to the public once a street piece is complete.

“Ireland’s street art scene is in its teenage years, it’s found its own identity; we have our own sense of self. For the last five or six years it’s really consolidated, there’s been more of a New York graffiti style, stickers, stencils, a real visual feast.”

“Once you put something out there the public takes ownership. They can affect it in a complementary or subversive way and they are going to make that decision based on how they feel about the piece. People open up a dialogue with it as soon as they make a mark on it, to try and manage that is like trying to stop the tide coming in. It’s out of my hands.”

Laura Masi has a BFA and BEd in Art Education from the University of British Columbia and is currently doing the MA Art in the Contemporary World at the National College of Art and Design. You can check out her personal street art blog at love4vandals.tumblr.com.