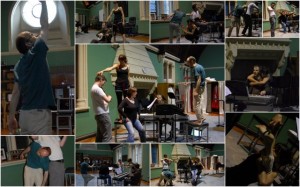 Roisin Power Hackett reviews the Open Rehearsals show which took place at the Back Loft Gallery on Tuesday the 30th of October 2012.

The open rehearsals are a group who perform improvised music theatre. Before coming to their show I had not done any research into what they were exactly. Having agreed to review the show and having no background in or knowledge of music seemed immediately problematic…

Their show began just after half eight. I seated myself next to the group’s cello player. This meant that throughout the show I was very aware of the parts she played and could see her music sheets. The gig was very intimate with about a dozen people in the audience, who were all circled around the musicians and the black plastic dance floor. There was a very noticeable colour scheme, which eluded my understanding. Black and red fabric was draped over every surface – the music stands, the piano, and was also on the costumes of the actors and musicians. This reminded me a little of the Féis’s I used to go and see my sister sing in, but also of the artist Kelly Nipper’s Black Forest (2012) performance for the Glasgow International, as both of these had the performers all dressed in black and red. This black and red group aesthetic seems to be cemented as a traditional formula for performance in general. Later on in the evening I discovered after asking one of the performers that this was because the colours were strong and that there was no other underlying reason.

The performance itself could be separated into different components – the music, the
acting or dancing, and the singing or words. What the group do is ‘pitched on the boundaries between abstract music, text art and theatre’ (The Open Rehearsals LaCatSalon pamphlet, 2012). The music was comprised of a mini orchestra, which included a violin, cello, clarinet, saxophone, keyboard and drum. They apparently played improvisational music, which during the performance I didn’t notice. This music informed the actors’ moves, who danced fluidly barefoot. For most of the hour long performance a soprano and a tenor sung words like ‘I’, ‘He’ and ‘She’, though occasionally mixing it up with the words ‘What if it is’, which I noticed from the cellist’s music sheet was the name of one of the pieces. The actors repeated these same words, as well as the phrase ‘last night’. They began to formulate a very loose narrative with their actions and their words. The poet, Aodán McCardle, was the librettist of this performance and his ‘current practice is improvisational performance writing’ (The Open Rehearsals LaCatSalon pamphlet, 2012). These words being spoken and sung are reminiscent of sound or Dada poetry and at some points the words were merely sounds expressing feeling. The poetry from his book IS ing is written in the dada style. This Dada style certainly came across through the entire performance. No wonder the Open Rehearsals are supported by Béal Festival of new music and poetry as this performance relies on the spoken word to make it different to an opera/dance piece.

The Open Rehearsals will be performing as part of the Béal Festival on November 7th and 8th. Visit http://bealfestival.wordpress.com/ for more information.

Roisin Power Hackett has recently graduated from the National College of Art and Design and is currently doing the MA Art in the Contemporary World at the same college. She has published a literary magazine in NCAD known as ‘The Kite’ and has an art blog at http://roisinphackett.wordpress.com/.