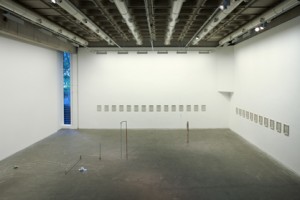 The Douglas Hyde is a great space. It really is. It acts as both facilitator and imposter, in both equal and opposite amounts. It not only allows the exhibits placed within it a grace of space and a let out of time, but also adds to the work, impressing its architecture on everything that sits within it. Once you have descended the concrete staircase, and left the hubbub of the Trinity students above, you are aware of entering the “other”, with the clear possibility that anything might happen. In other words, The Douglas Hyde as a space makes most things look good. This is of real benefit to Nina Canell’s exhibition, Tendrils, that was recently showing in Gallery 1 of The Douglas Hyde.

At first the artist’s use of space is somewhat panic inducing. The pieces when deciphered are sparsely placed within the gallery, causing the viewer to feel an exposure and pressure to glean something, from what seems like nothing. However, once you begin to acclimatise to the exiguous aesthetics, you see that Cannell uses space (as a musician might use silence) as an instrument.

Pieces On Thirst (Bells), and Of Air truly benefit from the spatial freedom they are allowed. Of Air holds the space afforded to it with almost a patriarchal stance. Its form, a large perspex jar on a high wood table, gives a point of orbit for the rest of the exhibition. This allows the more ethereal pieces a point of stable reference. The hair-like copper wire within Gallery 1 floats as if it could be part of the building, but on a second look the effect is of something much more fantastical and otherworldly. This juxtaposition of the everyday and the sublime provides the viewer with the vast possibilities of combinations within the material world. As a result it is a shame that Waiting For A Spark is shown in another part of the gallery. The piece, which consists of coagulated air and a weathered piece of wood, if positioned within the main area of the exhibition would create a real cohesion of idea. Impulse Slight, on the surrounding walls within the main gallery, frames the rest of the exhibit. The uniformity of the watermelon seeds, but also their notable differences, feed into the numerous combinations and possibilities that one medium can give.

The fly in the ointment is Affinity Units. With its inclusion of copper piping, halogen lights and breezeblock-like-rocks, it brings the exhibition from its flighty wonder, back down to quite an ugly reality. This is a shame. The charm and promise of the other pieces are jarred by the industrial qualities of the work, which skews the concentration of the exhibition as a whole. As it stands, the pieces in themselves are quite beautiful, and have a fragility that really awakens the viewer, but as an exhibition it does not read as a distilled and reassured concept.

In contrast in Gallery 2, Fergus Feehily exhibits work that is both poised and purposeful. The womb-like room is a much smaller and intimate setting for The Paradise [37], an installation consisting of five small card shaped works, a slide projector displaying images, and a larger framed work. The installation in general has a celebratory tone. The smaller pieces with their bright, sweet wrapper like collage have a child like wonder, which is mirrored in the abstract, yet utterly familiar projections on the adjacent wall. The images shown on the projector, though abstract, seem deeply personal, like vivid snapshots of old memories. The photographs, which range from block colour to reminiscences of a family home, coupled with the constant sound of the slide projector, add a warmth and life that would otherwise be lacking. The sum is something that feels almost haphazard, and yet you know that everything has been agonized over, down to the right shade of grey for the walls (which it is, by the way, not too light, not too dark and warm enough to be comfortable).

The only slight irritant is the larger work, River River, hung on the opposite wall to the five smaller works. Though a beautiful piece, all muted fuchsia streaks, like lipstick an aunt might leave on a coffee cup and framed as if it had been hanging in your grannies front room for the last 15 years, it is doing something very different to the other parts of the installation. In a space as small as Gallery 2, it is unneeded to introduce a third element to this exhibit, and it distracts the viewers’ gaze from the other two aspects. Yet the exhibition is still utterly successful, with the added extra of the sound created by the slide projector. Even reaching the top of the stairs to rejoin the throng of Trinity students, you can hear it rolling from picture to picture, like waves on a Wicklow beach visited in your youth.

Maeve-Ann Austen is an ACW participant.