Laura Masi writes her second installment of Beyond Gallery Walls: A Street Art Blog, for the Art in The Contemporary World website: 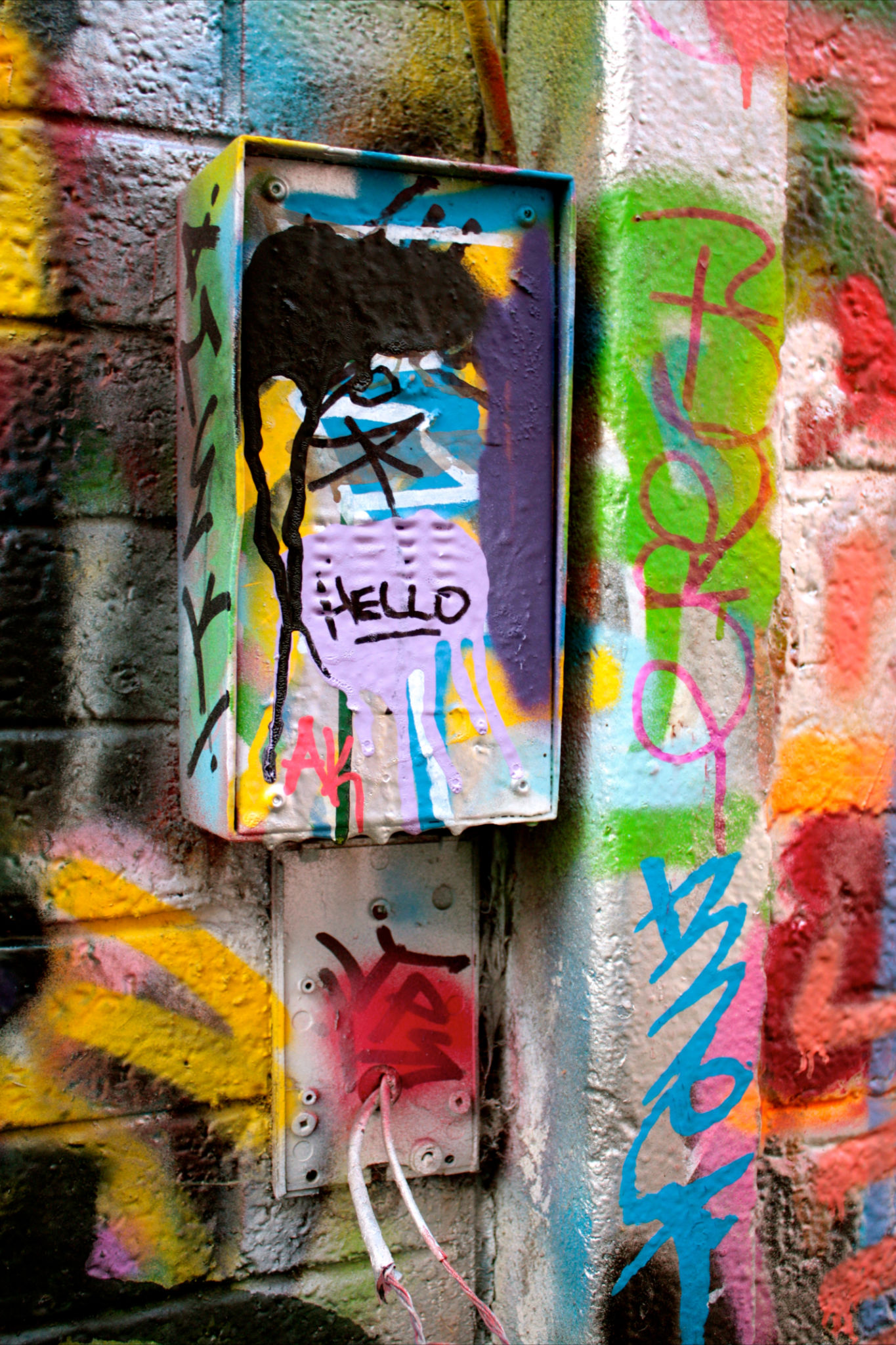 Windmill Lane is definitely one of Dublin’s iconic spots for street art especially Graffiti. This area is apparently the most graffiti covered location in Ireland. Windmill Lane is found just south of City Quay and is quite a spectacle once you turn the corner and witness its full rich, colourful, glory. 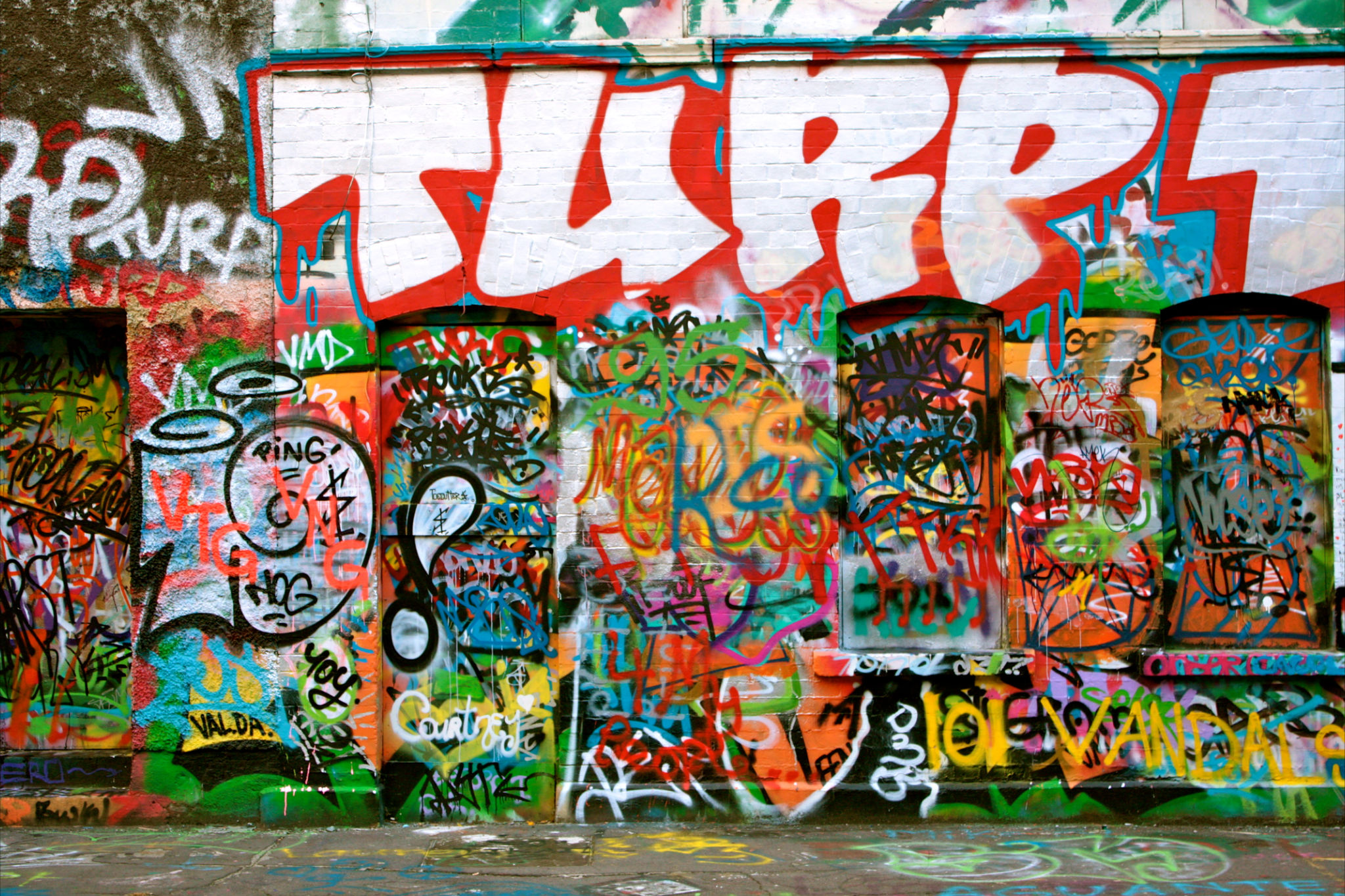 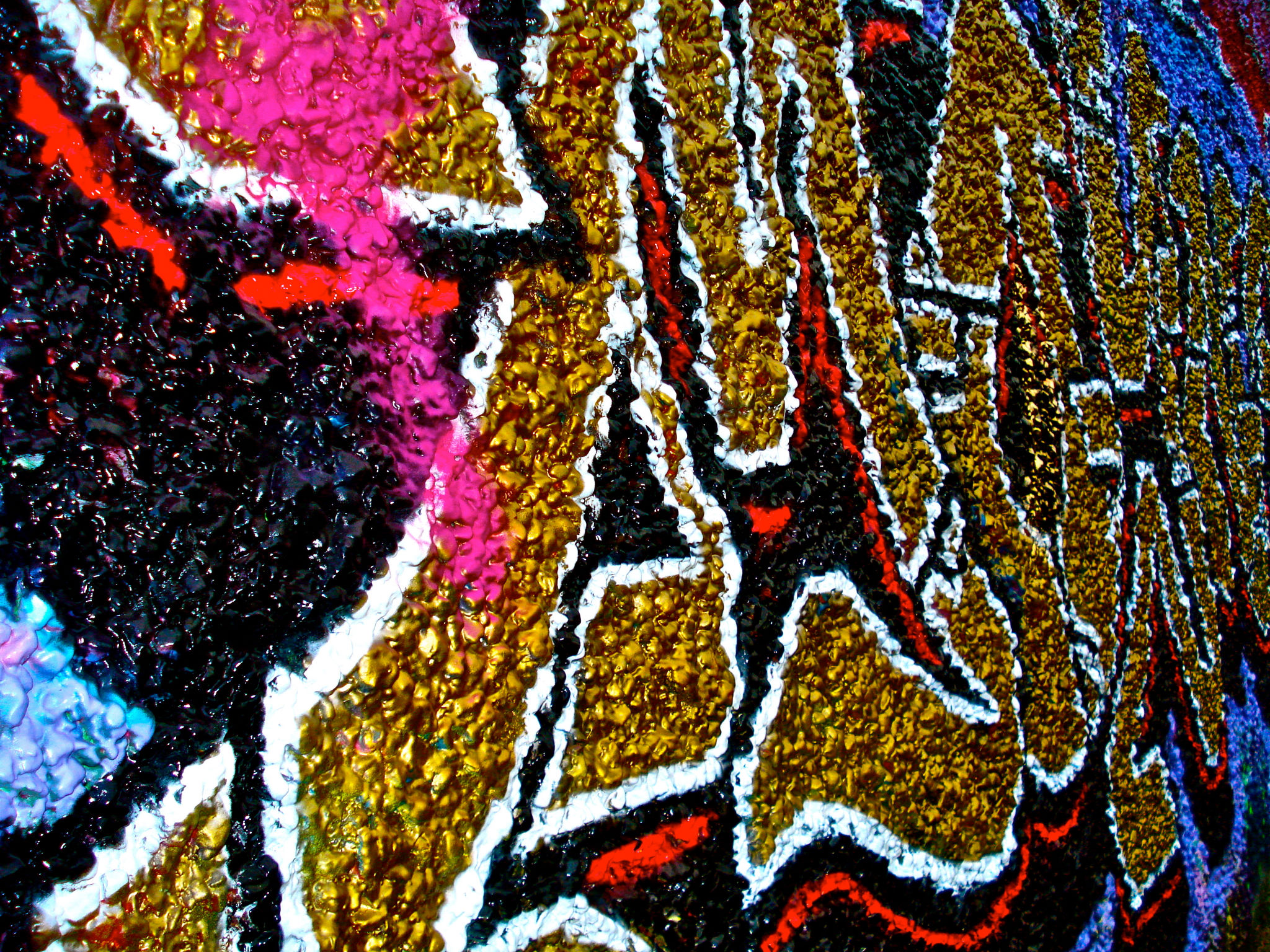 Whether you are a fan of U2 or not there is no denying the bands association with this hidden street art treasure. Windmill Lane was once home to Windmill Studios where U2 recorded much of their music. Fans of U2 from all over the world began to visit Windmill Lane and creating works of art on the exterior walls of Windmill Studio in order to show their love and homage for the band. 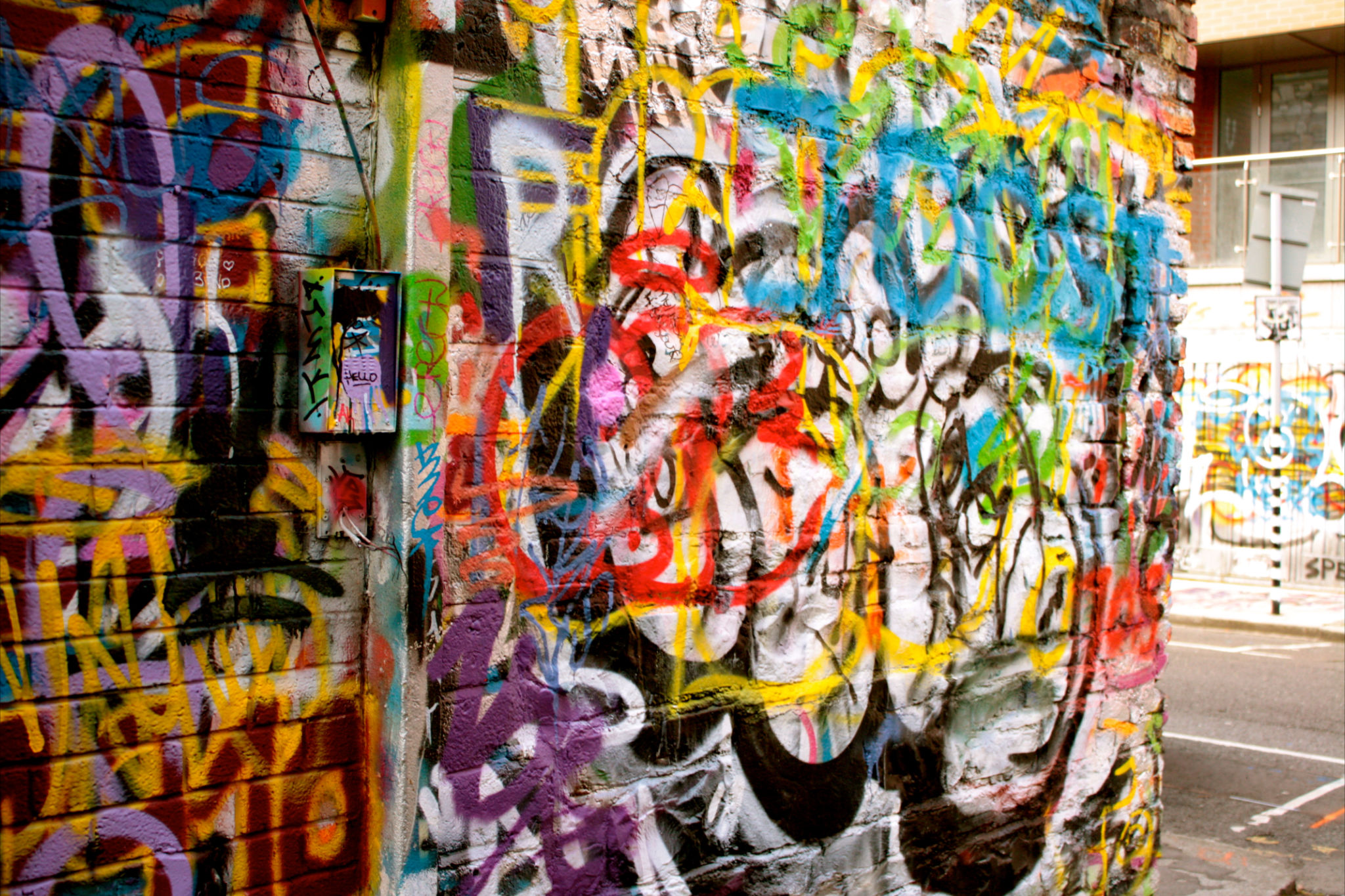 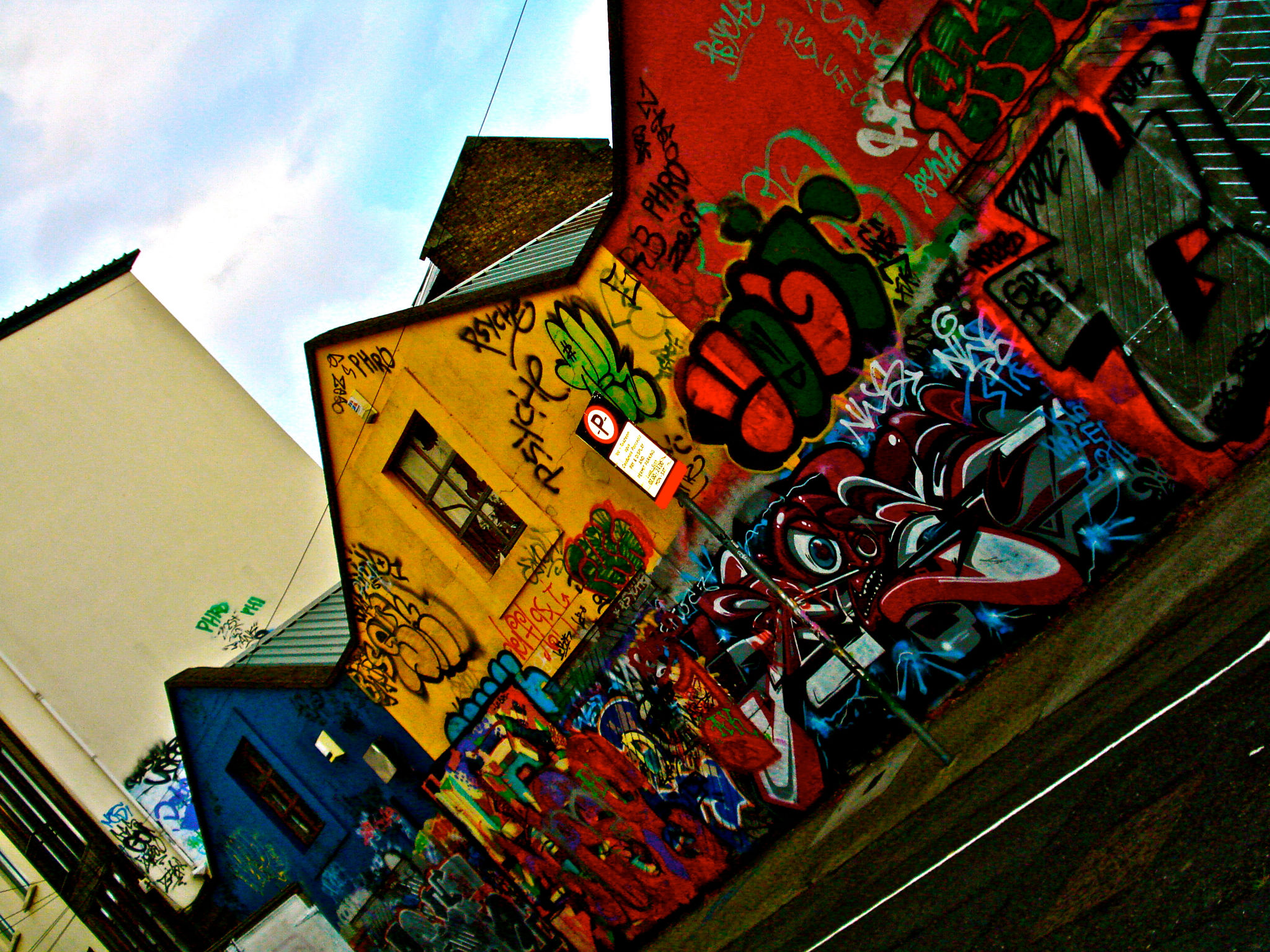 Today, Windmill Lane Studios no longer is located on Windmill Lane but the tradition of graffiti in the area has greatly continued. This lane is literally saturated from top to bottom with tags, murals, throw-ups (large stylized graffiti tags), various animated characters and abstract motifs. There is layer upon layer upon layer of different works that blend and compete with each other. 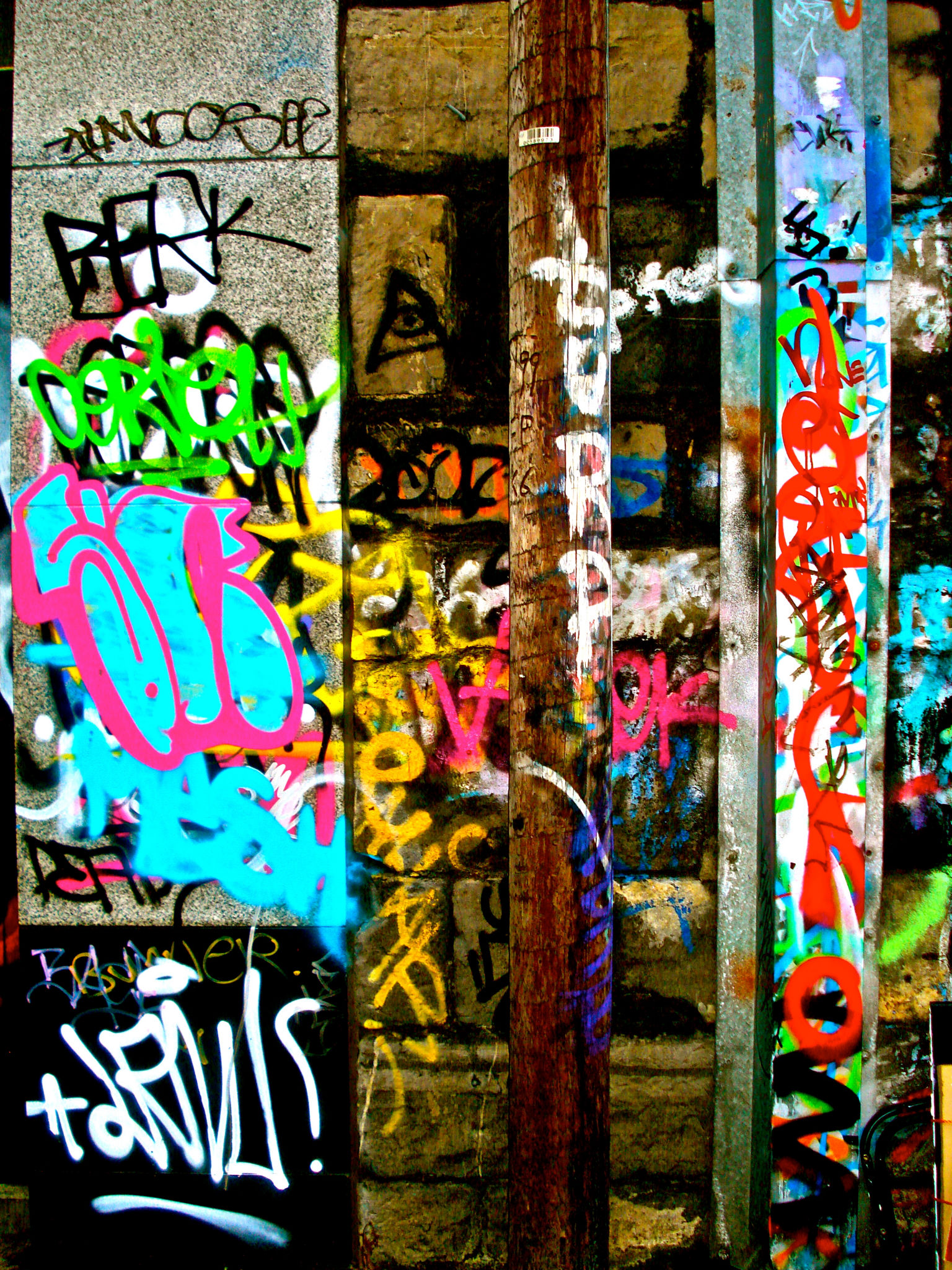 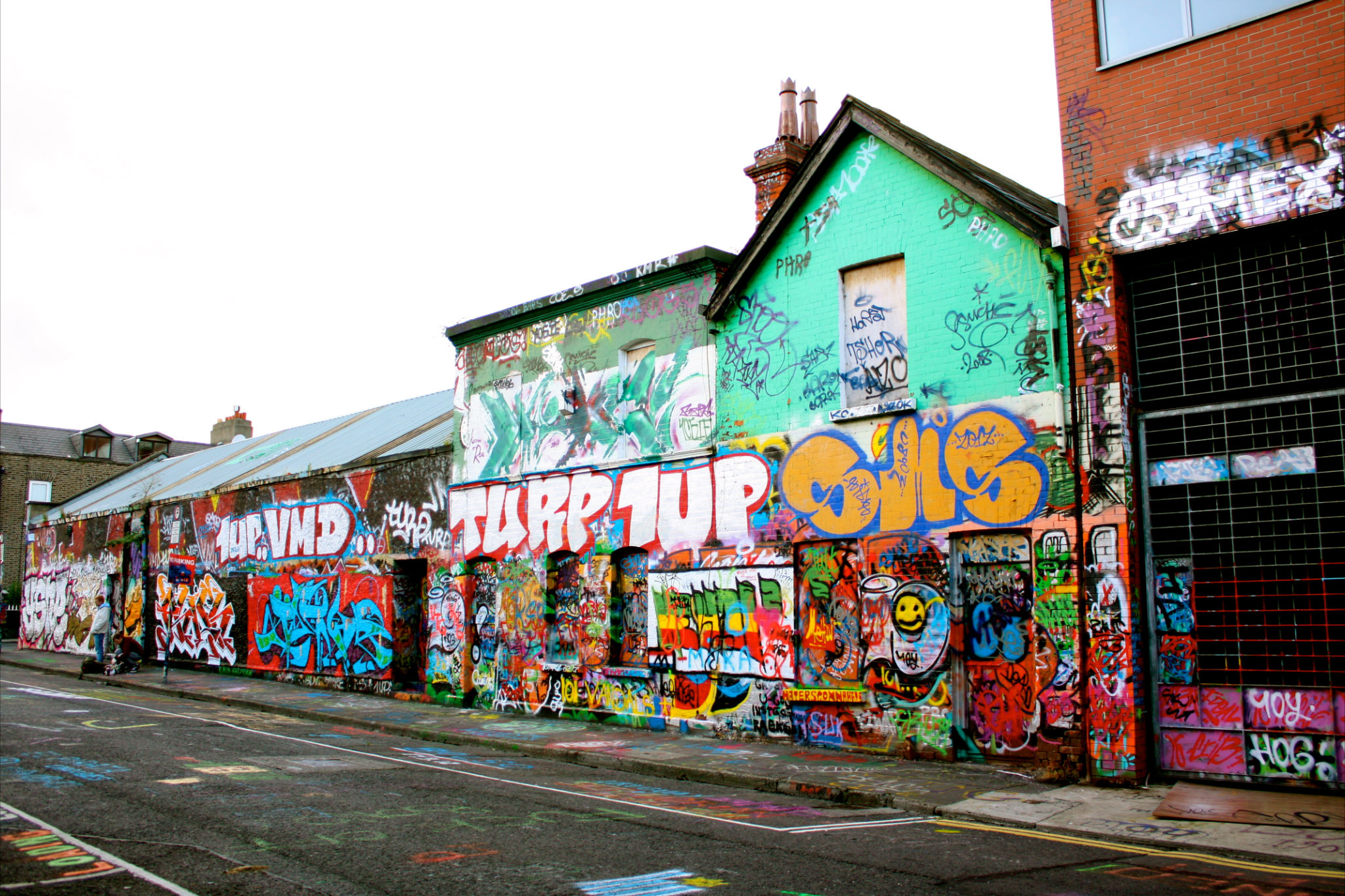 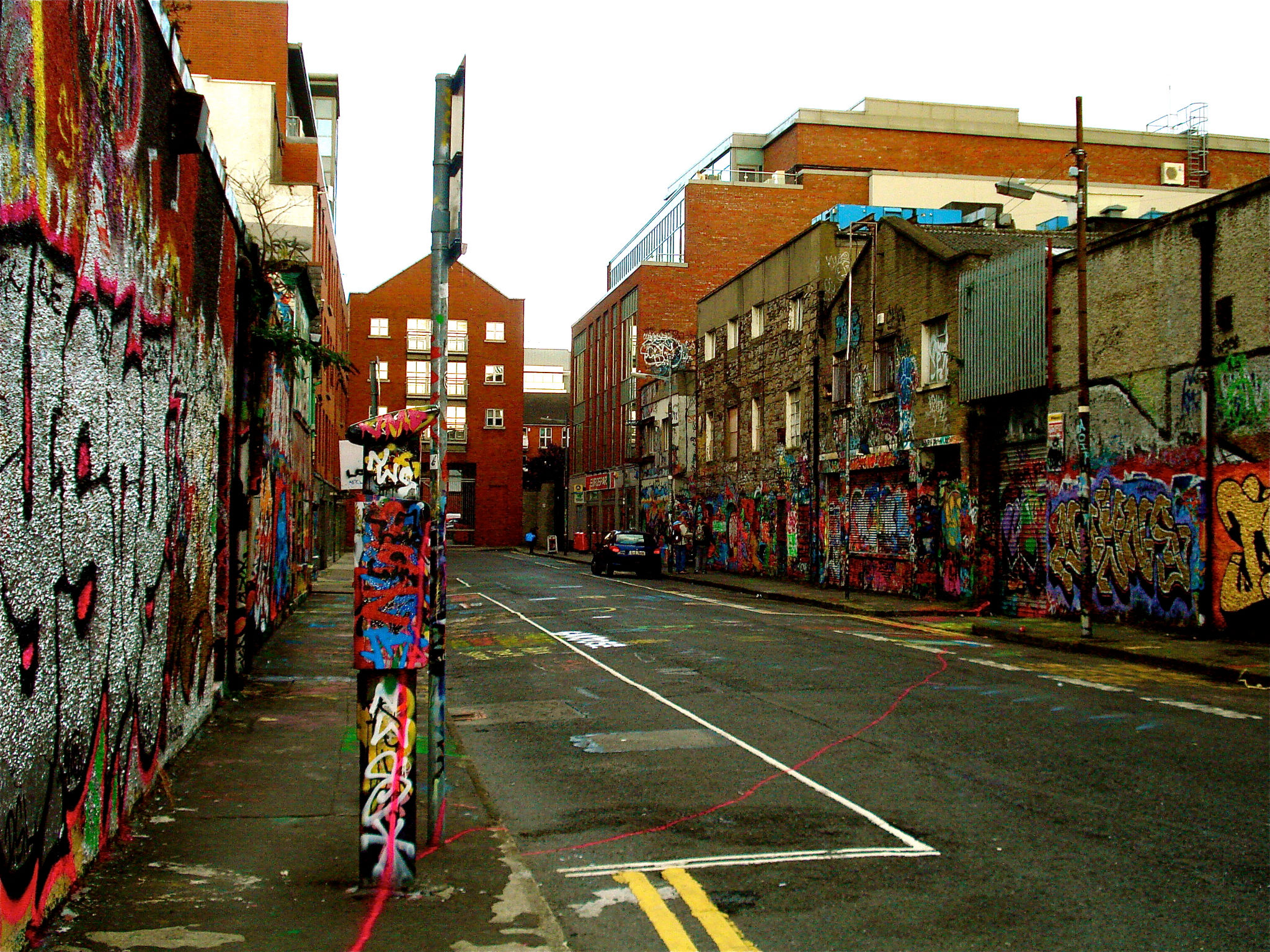 It is apparent that the once visual expression of adornment for U2 on Windmill Lane Studios has escalated into a prime zone for graffiti writers to come test out their skills regardless if they are fans of the band. When I was visiting Windmill Lane, there just happened to be a couple of young men finishing off a piece of work and something tells me by they probably couldn’t careless about U2.

The old Windmill Lane Studios remains boarded up and abandoned now but the graffiti keeps it vibrant and alive. Rather than succumbing into a state of ruin this area is renewed every time someone decides to take a spay can to its walls. 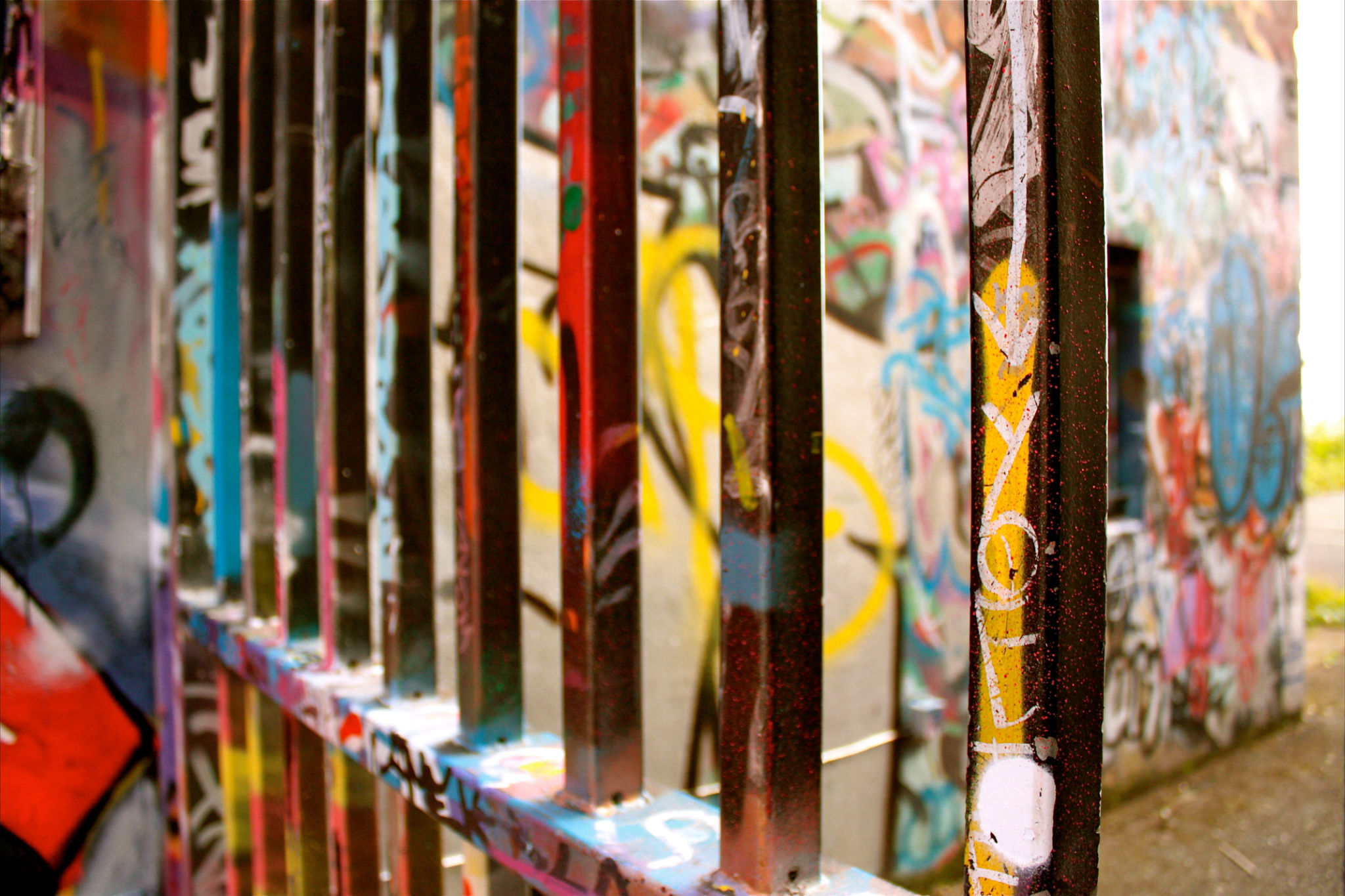 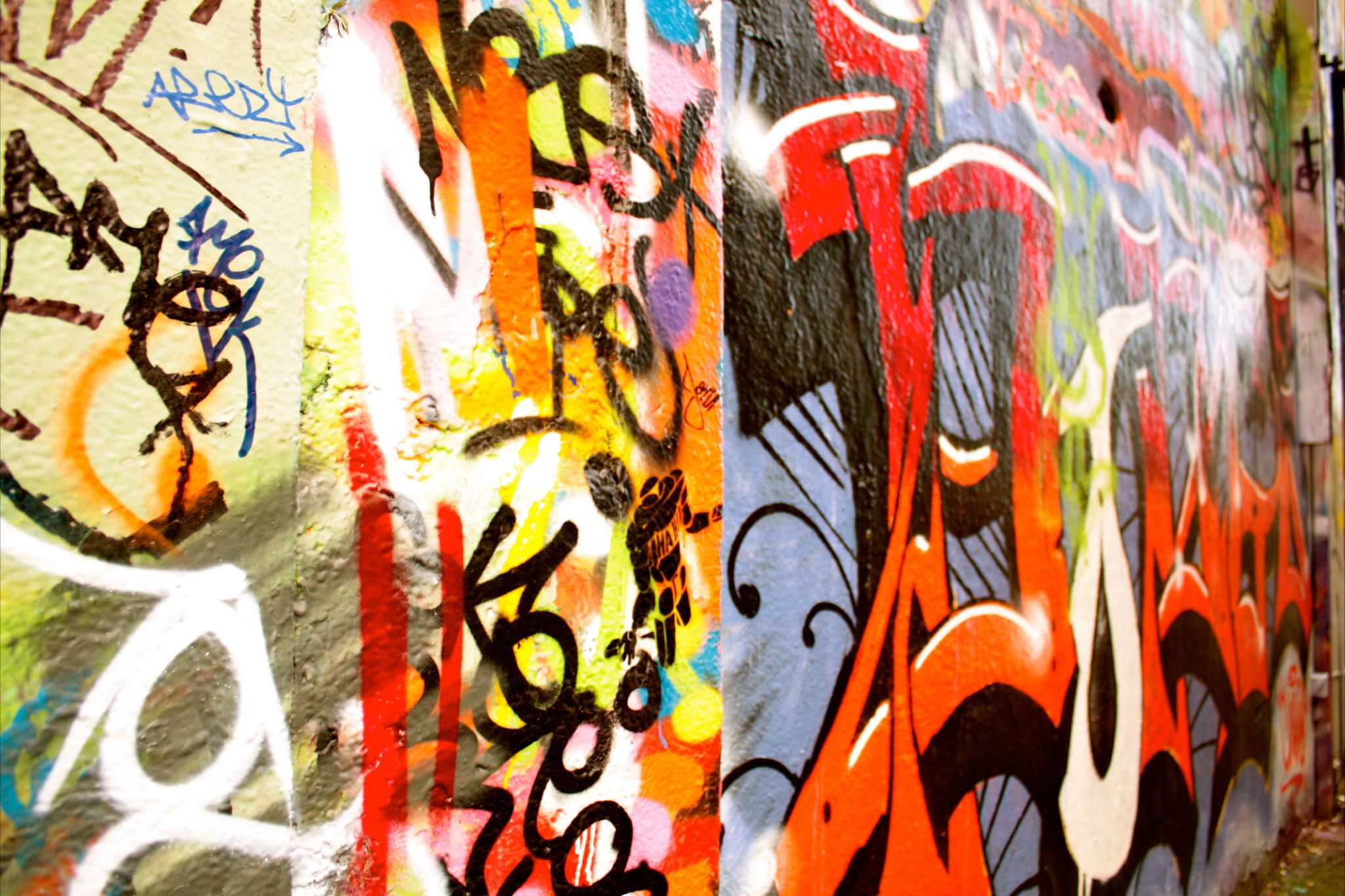 The artwork has spread from that main studio building to the whole lane and then some. It appears as if no surface has remained untouched. Even if you’re not a street art enthusiast, Windmill Lane is still very much worth a visit! 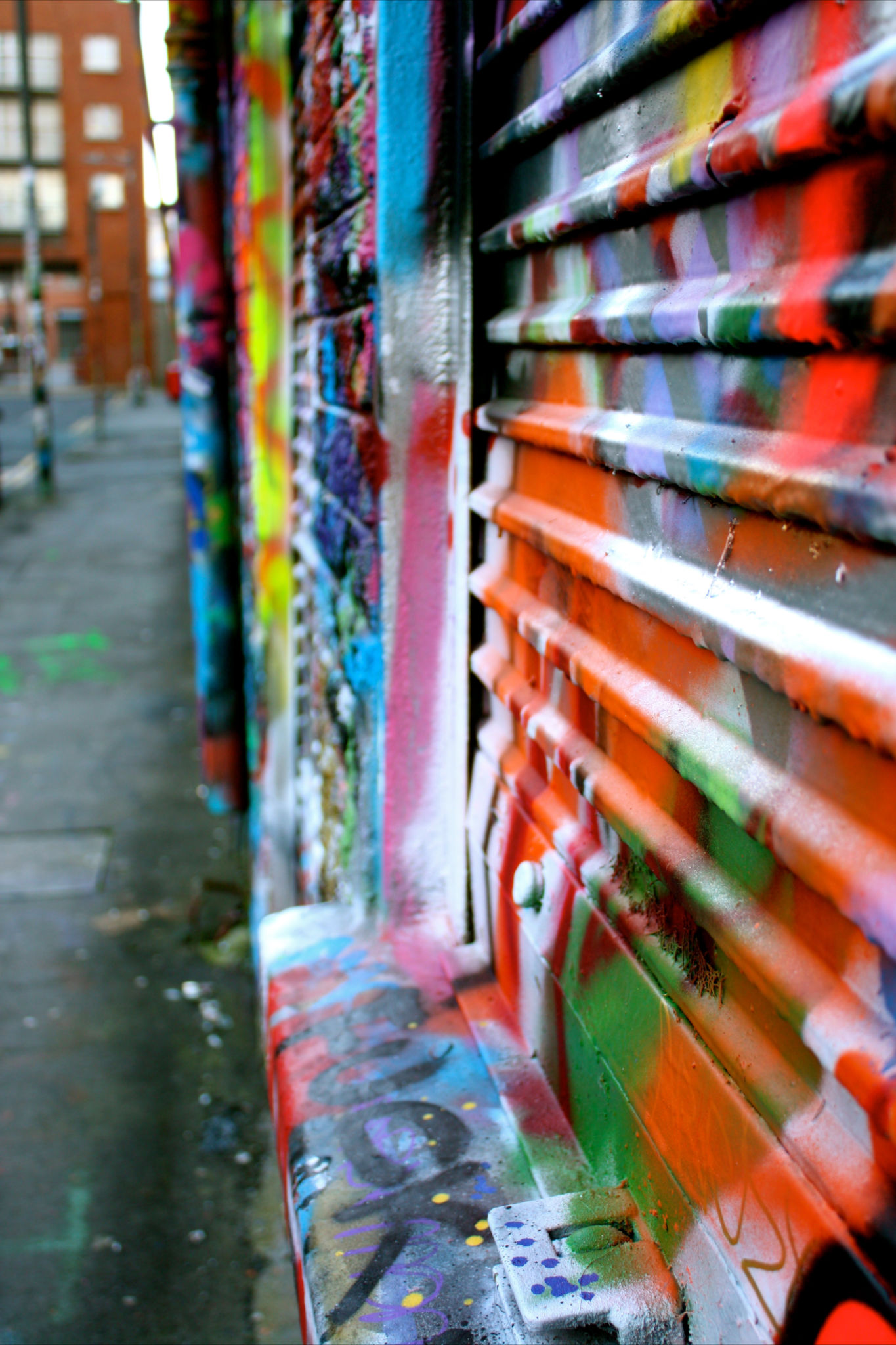 Now compared to Windmill Lane this next Dublin piece of street art is much more subdued and conceptual. This image can be found in various locations around Dublin. It is simply a photocopied image of two hands coming from opposite ends grasping each other. Compared to spray paint this form of street art is very impermanent as it is merely applied with glue or tape. Yet if you encounter it strolling through Dublin it still disrupts the motions of the everyday and gets the viewer to ponder what this image might be expressing. In addition the repetition of encountering this image on several occasions as I did, plays a strong roll within this type of street art. It’s like a constant reminder or small subversion of the urban environment. Various meanings could come from this image such as helping or supporting those in need. 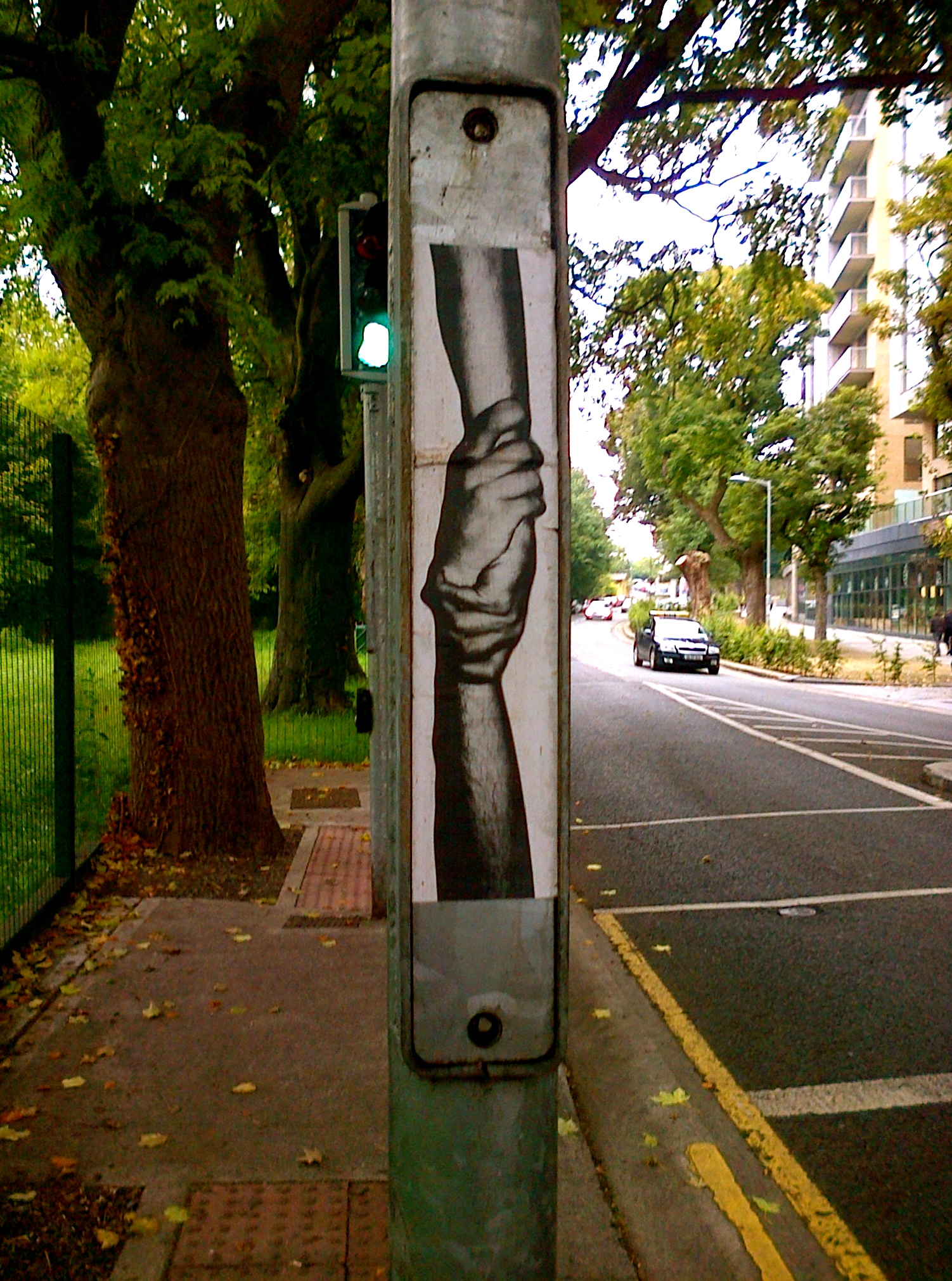 Another paste on image that I repeatedly found around Dublin is the two nude nunlike figures that are sharing an embrace. I assume there is many varying statements that can be made through this image and I will leave it up to yourself to form a conclusion… 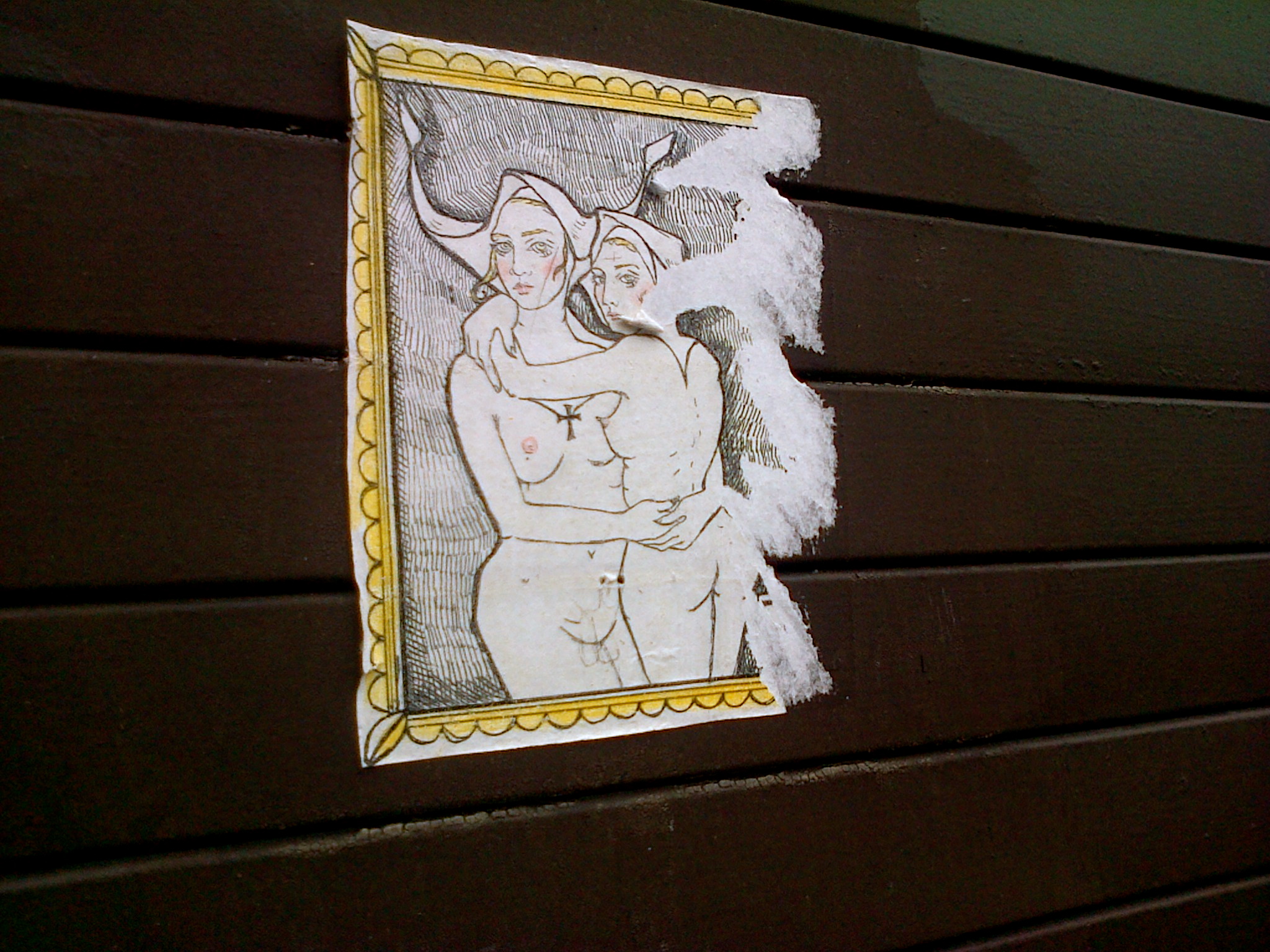 I will like to conclude for now with one other street artwork that was installed in Smithfield beside the front entrance of the Cobblestone on North Kings Street. It is an art piece that commemorates Bob Doyle, who was the last surviving Irish soldier of the XV International Brigade of the Spanish Republican Army and who also once lived on that very block. I did not know much about this man when I saw this work so with some research it appears he spent his life fighting against fascism, inhumane labour and political conditions. He was once apart of the IRA and fought against Franco during the Spanish Civil War. Bob Doyle is portrayed as a man that sacrificed much of his life in order to fight for the rights of the working class. The mural has now been removed as the Cobblestone has gone through a facelift. Personally, I thought the once run down looking exterior of the pub was quite charming. Someone may have made a slit protest against the new look of the venue with a photographic stick on image of the old Cobblestone. This piece of street art was placed on the freshly painted white wall where the Bob Boyle mural had been placed. The image was subsequently removed as well. Easy come, easy go… 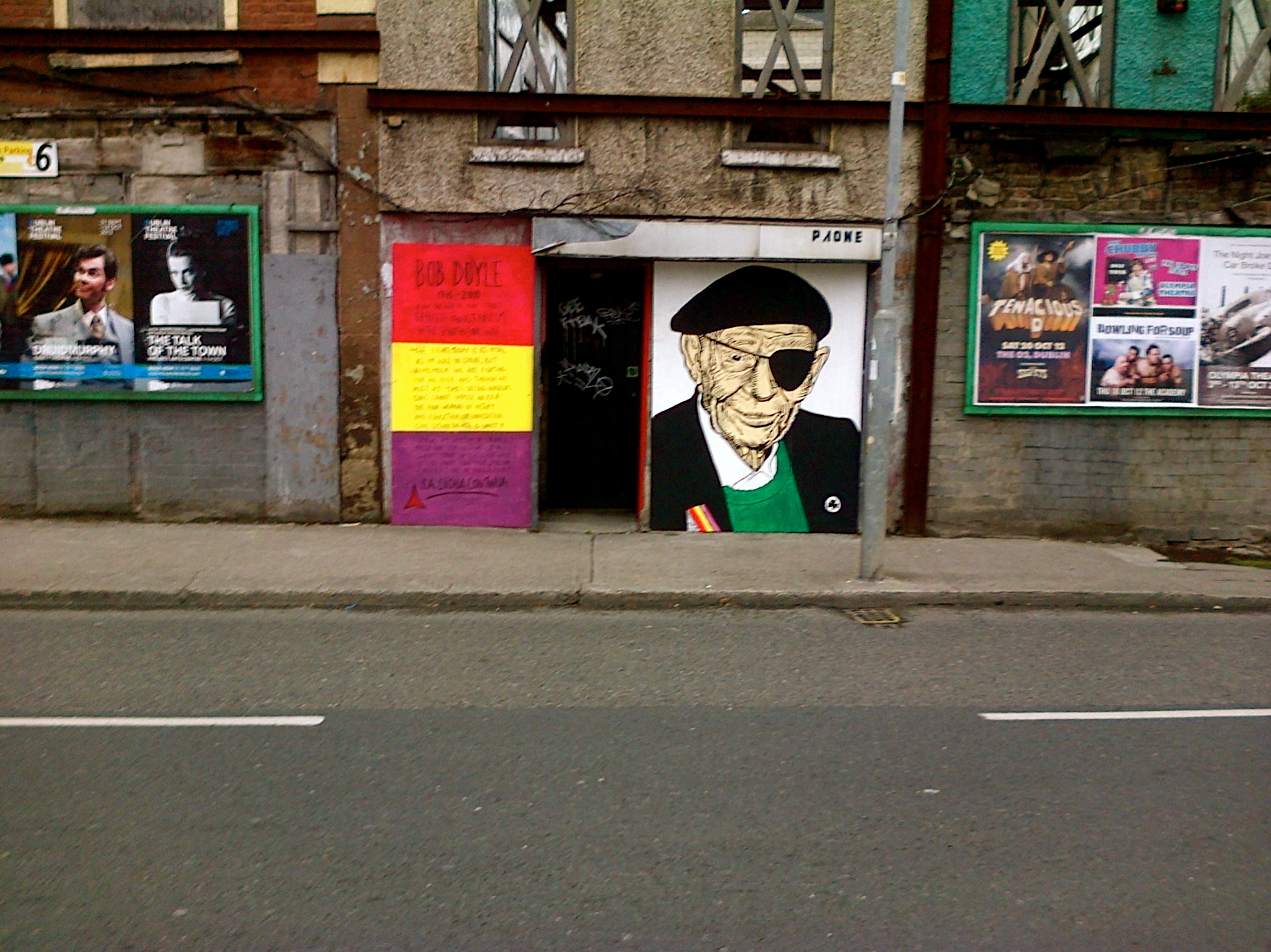 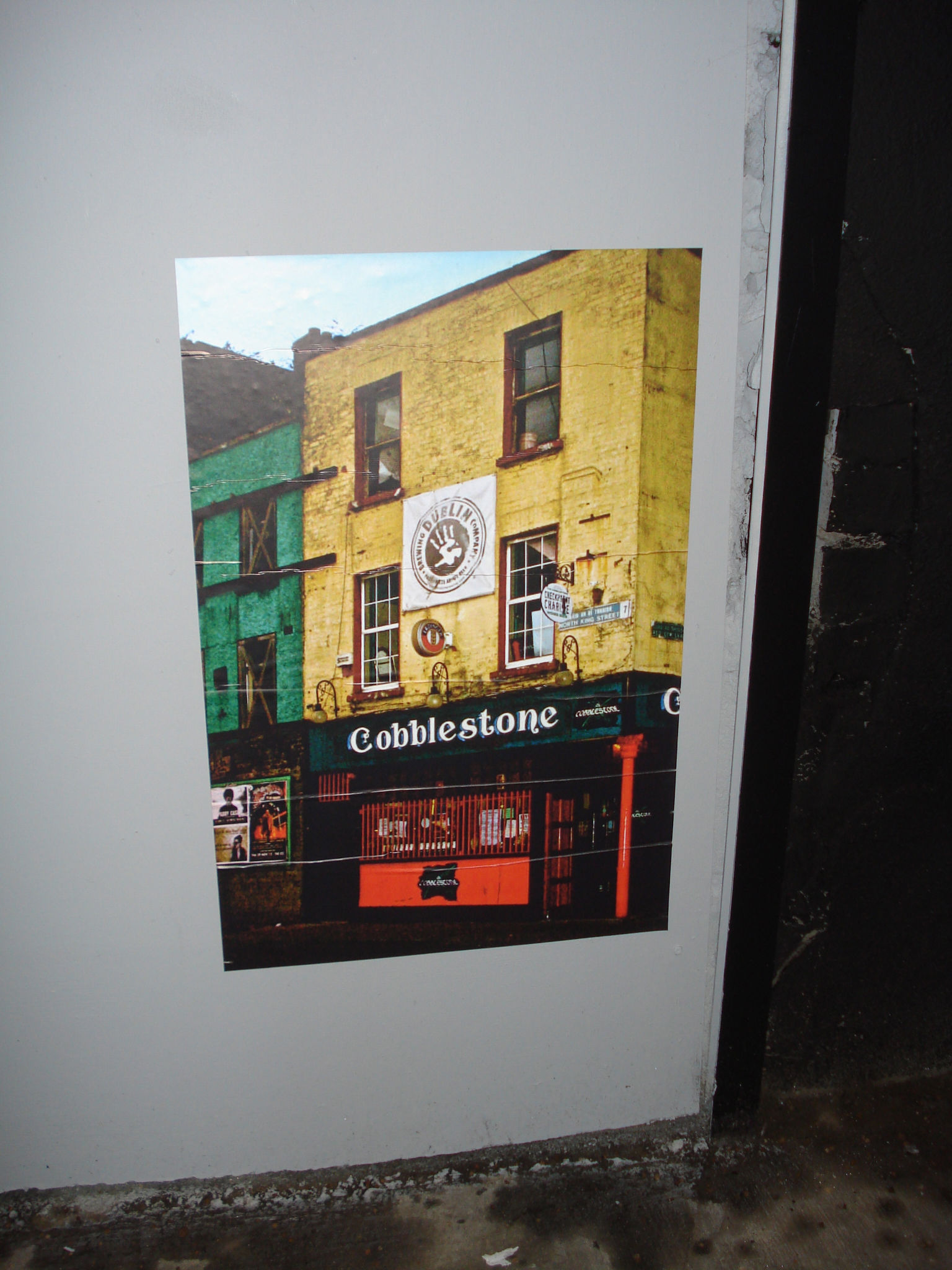 Laura Masi has a BFA and BEd in Art Education from the University of British Columbia and is currently doing the MA Art in the Contemporary World at the National College of Art and Design.