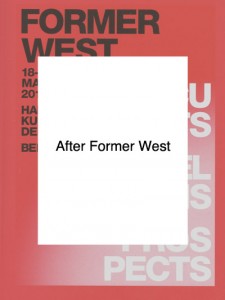 Report, reflection and discussion on the Former West congress

This event in the Goethe Institute will present a set of reports, reflections and discussions by four attendees of the Former West congress – Ciara Hickey, Barry Kehoe, Marysia Wieckiewicz-Carroll and Hugh McCabe – all of whom are either current or former students on the MA Art in the Contemporary World course at NCAD. The major themes of the congress will be presented and discussed such as art production, the role of the archive, technology and infrastructure, and dissident knowledges. The event will be chaired by Georgina Jackson.

The Former West: Documents Constellations Prospects congress, which took place in Berlin during March of this year, brought together artists, theorists and thinkers to consider the role of art and knowledge production in a post-1989 world. While we are used to using the designation Former East to refer to that part of Europe that has been transformed following its release from Soviet domination, we often fail to recognise that there is also a Former West, as similarly momentous transformations have occurred within those jurisdictions on the western side of the Berlin wall. The most significant of these has been the rise of a neoliberal hegemony which has simultaneously blunted the abilities of both art and politics to effectively critique or resist it. The Former West congress set out to explore this situation and to try and answer associated questions that arise from it. How do we go about imagining the future under these conditions? How do we think about political alternatives and what role can art and knowledge production play in this process? If contemporary art has become hopelessly embroiled in this hegemony how do we move beyond notions of the contemporary to restore some sort of political agency to our work? Among the participants debating these questions were well known theorists such as Irit Rogoff, Franco Berardi Bifo, Boris Groys, Homi K. Bhabha and SImon Sheikh.

Ciara Hickey is a Belfast based curator who is currently co-curating Household festival and works as Gallery Manager of Belfast Exposed. www.householdbelfast.co.uk

Barry Kehoe is a performer, writer, musician, historian and educator. He works in the Irish Museum of Modern Art (IMMA) facilitating talks, tours and workshops for the museum’s various education programmes.

Marysia Wieckiewicz-Carroll is an independent curator and writer currently based in Dublin. She has been involved in a number of exhibitions and projects in Ireland, most recently as a co-curator of Sleepwalkers. Production as Process at the Hugh Lane Gallery.

Hugh McCabe is a photographer and lecturer. He teaches Digital Media at the Institute of Technology Blanchardstown.

Georgina Jackson is a curator and writer. She recently completed her PhD at GRADCAM/DIT exploring the increasing engagement with the political within recent exhibition-making. With Glenn Loughran she runs the Politics Of Participation course as part of the MA Art in the Contemporary World at NCAD.