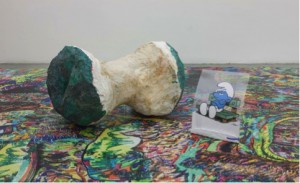 By all accounts, it looks like a child’s messy bedroom from the early 1990’s; the Kerlin Gallery’s white, rectangular cube space interrupted by a visual cacophony of mucky colour and pop culture ephemera. The vague forms of Sesame Street characters and cartoons both popularly remembered and broadly forgotten become apparent in the swampy tide, their acetate and vinyl flatness sharp in juxtaposition with amorphous sculptural lumps of toilet paper and watery marker ink, crude approximations echoing the even cruder experiments of a child first exploring the plastic materiality of their world through Crayola, Play-Doh and household waste.

Even without the aid of the show’s press release, Sam Keogh’s work immediately makes apparent its preoccupation with a particular period of children’s popular culture. Waste is unmistakably central to the work, as is a kind of nostalgic hoarding. Cheap, trashy relics of commodities thought to be disposable are laid out, preserved and presented in seemingly random formations across the gallery. The space is as hard to negotiate physically as it is visually. Easily toppled pop culture detritus is strewn across a vinyl-covered floor, re-imaged marks of biro pens and felt tip pens arranged in seemingly psychedelic patterns which at first appear abstract but reconfiguring into a recognisable form as the gallery space is negotiated. Like a candy Nazca Line or plastic spiral jetty, Oscar the Grouch’s glitched and iconic appearance becomes recognisable.

Oscar, the presented subject of the show, is a character from the popular long running children’s programme Sesame Street. Particularly popular in the 80s and 90’s, the show was originally developed so that underprivileged American children could be introduced to the basics of English literacy and numeracy in their homes, but the programme quickly became an international sensation due to its colourful cast of characters, emphasis on diversity and general accessibility.

It is no surprise that Keogh’s work should be so immersed in the seemingly trashy and transient, both in terms of media and subject matter, when Oscar is considered as a role model. Occupying the figure of a pariah on Sesame Street, Oscar acts as a counter cultural agent in opposition to normative sensibilities, his attachment to things deemed useless used to place importance on the seemingly unimportant.
A lone video of noticeable VHS quality plays of the artist in performance, a highly strung negotiation of the quickness of thought and the garbage of living where Keogh’s channelling of Oscar takes verbal form; his negotiation of trash, treasure and the uncertain area between both which his work occupies made all the louder.

It all begs the question; how does one know if work like this has failed or succeeded when failure is used to deny value? The answer is deceptively simple: through the embrace of failure the work defies its own parameters, neither failing nor succeeding but instead engaging in a frustrating practice of constant evasion. Success is made to fail.