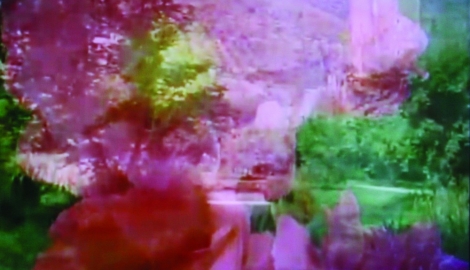 Cora Cummins works to date revolve around ideas that relate to remoteness and withdrawing into spaces of refuge. Her main working medium is printmaking, she also works through an assortment of other mediums such as video, sculpture and publications. The Fold is an ongoing pamphlet, thoughtfully designed. It functions as a distinct fragment within the show, one that records various encounters which Cummins has unearthed while she gathered research. The text embellishes the prints and video work with various narratives and ultimately invites you to enter into an elusive world.

Her work for this show re-counts her own personal experience of place, rooted in her childhood and local community in Co. Carlow. More specifically, she has based the over all theme on a pavilion, designed by architect Sam Stephenson. Traces of the garden were uprooted to make way for this building that is fondly recounted by the artist, these were tales her grandfather told, who was once a gardener at Ballynoe House during the 1950’s and 60’s.

Working primarily in etching and aquatint, Cummins makes subtle, muted prints that offer up an image of what a garden could be. In Roof Garden, urban rooftop gardens are dislocated from their chaotic environment, unnecessary information blotted out. A dense infinite backdrop exists below a star speckled sky. Island Garden alludes to Arnold Böcklin’s Isle of the Dead, except Cummins’ island appears within the confines of a snow globe realm, where heavy clots of snow fall indiscriminately. Pale pink recalls a particular type of tissue used to wrap confectionary, a practice from a long forgotten era.

Cummins uses a light touch, where familiar sparse lines and tones are aligned with a pared down aesthetic that merely indicates the bare essentials. Likewise, she fictionalizes this further with Courtyard Garden and Walled Garden, loosely referencing the images that she gathered from the Irish Architectural Archive. To echo this, she prints them on what appears to be old frayed, discoloured printing paper, delicate references to their distant past. Other titles such as Ghost hint at something that still lives on, that somehow, her grandfather’s work may have left its mark despite Sam Stephenson’s decision to clear the garden. Other works, Black Pool and Pool Pavilion, are documented to confirm the current existence of this site. Yet, in Black Pool, there is unearthly feel to the white ink printed on black paper, the imposing trees stand menacing above the pool below.

Pool (12 mins, Digital Video) and Rose (6 mins, Digital Video) are evocative depictions of this duality, where past and present survive together. Their existence reconciled. Pool features cropped close ups of the pool set against the backdrop of the pavilion. Cummins recorded the 12-minute Pool on a bright summers day, perhaps an inclination that suggests warmth and affection. There is a sense of rediscovery in this piece, a place the artist never visited as a child, but existed in her imagination until this point. Her video is almost a conclusion to the show and her own past.