Quite by chance the curator of this exhibition, Francesco Bonami, was shown a portrait of Hitler, kept in storage at the US Army Centre of Military History in Washington DC. An allegorical painting called “The Standard Bearer” it depicts Hitler as Joan of Arc. It is by Hubert Lanzinger and dates from 1935. A US soldier defaced the painting, with a bayonet, following WW11. Frustrated by his inability to attack Hitler in person, the soldier attacked the painting, in a gesture of angry impotence and frustration. 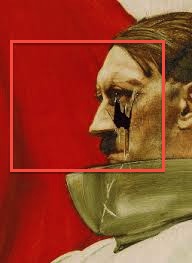 This random, yet fortuitous, coalescing of circumstances has resulted in an exhibition at the Gagosian Gallery, London. I can only imagine that the cut inflicted beneath the eye of the portrayed Hitler must have struck a chord with Francesco Bonami. Following his viewing of the Lanzinger painting perhaps his word association chain went something like this; Cut> Canvas> Fontana> Hitler> Cattelan> HIM> Genius! >Me.

The exhibition contains two works. A painting by Lucio Fontana, entitled “Concetto spaziale, La fine di Dio” juxtaposed with the kneeling wax figure of a boy child, entitled “HIM”, by Maurizio Cattelan. The result; a face off, of epic proportions. Given their history, this side chapel in white, may be an aesthetic OK Corral.

Fontana, his egg shaped tabernacle, wall hung portal to the cosmos, maps infinity. The artist withholds the secrets of the universe from a tweed-suited ruffian, kneeling in supplication.

Closer inspection reveals the boy as changeling; the face of the Fuhrer revealed in the child.

He pursued infinite knowledge, pushing the boundaries of the canvas, mapping the constellations. His aim was not to decorate a surface, but to discard its limitations.

The canvas is egg shaped. A painting, pregnant, it is the symbol of life.
Piercing holes through the canvas, in repetitive gesture, the artist is opening up the plain of the painting. In so doing, the history of painting is also laid bare.

Fontana envisioned the end of God. He saw the end of God as a direct result of our journey towards infinite knowledge. He explored the cosmos in the expanse beyond the canvas. With his gestural cuts he extended his quest outward towards the heavens and inward to the mind of man. Staring into the abyss his aim was to decipher its mystery.

Hitler represents such evil that Maurizio Cattelan cannot say his name. Kneeling for forgiveness, this wax figure, reduced exponentially, hides its identity. Cattelan asks whether it is possible to extend forgiveness to such a man.

Showing little respect for societal icons Cattelan has, over the years, desecrated their images mercilessly. From Popes, to artists, to political leaders, no one is safe from his ridicule. Seeking to deprive them of their standing within the community, he engages in parody, always intending provocation.

In his work “Untitled 1996”, Cattelan had a cut at Fontana. He sliced a large letter Z into a canvas. In this blasphemous, anarchic gesture, Cattelan continued his undermining of contemporary art and its canons.

It is part of this artist’s ongoing strategy to engage in excess. By zealous parody of political and artistic institutions, his aim is to shine a light on hidden power relations.

Paradoxically, in the process, Cattelan has become a very successful cog in the wheels of a system he has tried so hard to derail. Just as a virus is enveloped by white blood cells, the system has neutralized Cattelan, by clasping him to its bosom. Consequently, his rants may ring a little hollow.

Conversely, Fontana’s hot pink, egg shaped canvas, is imperious. It tolerates the presence of Cattelan’s Hitler only because he kneels. The tension between the two is palpable. In death Fontana has finally exacted retribution for the slight. There is a majesty and elegance to his work. The eyes of his canvas are averted from the corner boy, who begs forgiveness, on his knees.