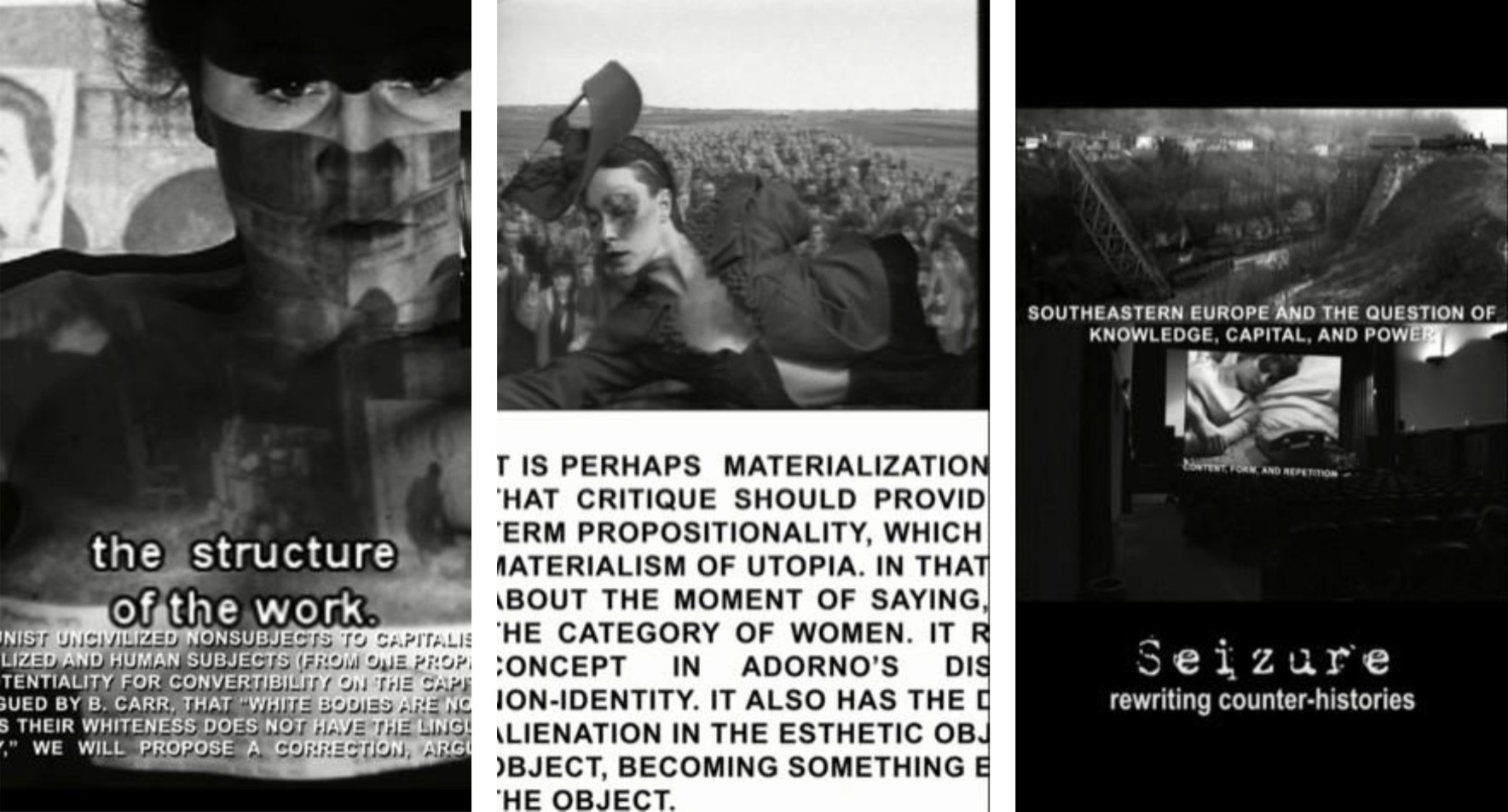 Critical Explorations at the Intersections of Collaborative Art/Research/Education Practices

Increasing collaborations among artists, academics, activists and other socially engaged ac- tors reflect a heightened interest in the overlapping fields of critical inquiry, creative practice and education. These explorations have galvanised an array of innovations in scholarship, teaching, arts practice and community work including new forms of cultural production and social analysis; of knowledge, politics – and knowledge politics; of alternative methodologies and pedagogies. Yet, by its very nature, such work provokes both productive and limiting tensions, as well as critical questions about the broader projects of transformative and transgressive praxes of knowledge production and artistic creation.

Seed funded by the NCAD+UCD alliance and with additional support from CREATE and UCD Parity Studios, this project aims to cultivate collective understandings and vocabularies sur- rounding this sphere of work in Ireland, to support an evolving network and community of practice, and to locate Irish practice internationally.

As an academic, artist and activist, our guest speaker, Marina Gržinić, embodies the aesthetics-knowledge-pedagogy nexus at the heart of the socially engaged collaborations and praxes this event seeks to explore. She will engage us in an exploration of her transdisciplinary conceptual work. This work turns on critical genealogies of the entanglements of neoliberal global capitalism. Marina uses these to interrogate the ways contemporary forms of racism, coloniality, democracy, and contemporary art/culture are both shaped by and implicated in the shift from biopolitics to necropolitics. This is a shift from the power to control forms of life by differentiating them from one and other, to the power to impose various forms of death and diminishment according to and because of these differences.

Alongside an analysis of the post-socialist transformations of ‘(the former) Eastern Europe’, Gržinić will illuminate the ways in which the de- politicisation of politics and of art, and the aestheticisation of ideology effect new articulations between form and content.

The screening of her videofilm, seizure – rewriting counter-his- tories (Gržinić and Šmid 2015), will provide an opportunity not only to engage with the sensual, generative, dissident responses to these discursive and material conditions, but to work through the ways in which such individual acts of creative intervention are themselves embedded and entangled in wider global legacies, formations and moments. These expositions will then stimulate reflection and debate among and across three mixed panels of crit- ical respondents (organised according to the areas of aesthetics, knowledge and pedagogy) – then extending to all those present – around the thresholds, confluences, and faultlines that traverse and constitute our practices.

*This sphere of praxes is defined by socially engaged, trans-dis- ciplinary and cross-sector dynamics, involving multiple forms of collaboration and interaction. It in- cludes, for example, artists/researchers/ educationalists/activists working togeth- er on tangible projects; artists pursuing PhD and research degrees; researchers employing arts-based methods, and so on: those who are working toward trans- forming essential elements of their prac- tice through transgression of disciplinary, institutional, political/ideological con- ventions, paradigms, and evaluative cri- teria that underpin the contexts in which they work.

Marina Gržinić PhD, is a professor at the Academy of Fine Arts in Vienna and a researcher at the FI SRC SASA (Institute of Philosophy at the Scientific and Research Center of the Slovenian Academy of Science and Arts) Lju- bljana. She publishes extensively in academic journals and has authored and co-authored more than ten books (monographs and translations), both at home and abroad, such as Une fiction reconstruite: Europe de l’Est, post-so- cialisme et rétro-avant-garde, (Ouverture philosophique). Paris; Budapest; Torino: Harmattan, 2005, Re-politiciz- ing art, theory, representation and new media technology , (Schriften der Akademie der bildenden Künste Vienna, Vol. 6). Vienna: Schlebrügge.Editor, cop. 2008. Necropolitics, Racialization, and Global Capitalism: Historicization of Biopolitics and Forensics of Politics, Art, and Life. Marina Gržinić and Šefik Tatlić, Lexington books, 2014. She has been active in video art and media art from 1982. She works in collaboration with Aina Šmid, art historian and artist from Ljubljana.

** Three panels of people are organised along the lines of the project’s overall objectives of mapping the synergies and tensions across key coordinates underpinning socially engaged work: aesthetics, knowledge and pedagogy. The panels, one for each coordinate, include people from art, research and education, who will identify and respond to Grzinic’s videofilm and presentation from the perspectives of their own work and experience. The floor then will be opened to all participants.

Sarah Browne is an artist based in Ireland. Her research-driven practice investigates the labour and mate- riality of how we communicate and create meaning through exchange and transaction. This process often includes the production of objects that are used to instigate discussions about economy, ritual and value: these generate further material such as film, radio projects and printed publications. Collaboration is fun- damental to how the work is developed, whether with practitioners from other disciplines (anthropology, dance, amateur radio) or certain individuals whose experience become key to the narrative of a given project. Recent exhibitions: ‘The Invisible Limb’ at basis, Frankfurt, ‘Hand to Mouth’, CCA Derry- Londonderry and the Institute of Modern Art, Brisbane (2014); ‘The Peacock’, Grazer Kunstverein, Austria; ‘One Foot in the Real World’, Irish Museum of Modern Art, Dublin; ‘Still, We Work’, a touring commission for the National Women’s Council of Ireland (2013); ‘How to Use Fool’s Gold’, Ikon Gallery, Birmingham and Contemporary Art Gallery, Vancouver (2012); New commission, with Jesse Jones: ‘In the Shadow of the State’ http://www.create-ireland.ie/current-press/major-new-collaborative-commission-for-2016

Liz Burns is Arts Programme Manager with Fire Station Artists’ Studios in Dublin which supports socially engaged arts practice and critique through art commissions, talks and publications, and international oppor- tunities through exchanges, and a curator in residence programme. Past projects include ‘Troubling Ireland’ a think tank and public art project for socially engaged arts practitioners which was led by the curatorial collec- tive ‘Kuratorisk Aktion. (2009- 11) and Two Monuments’ (2009) with Polish artist Artur Żmijewski. Publica- tions include ‘Art & Activism’ (2014) and ‘The Applied Social Arts ‘(2010). Liz completed her MA in Visual Arts Practices with IADT in 2009 and since then has been developing her independent curatorial practice and writing. Curated exhibitions include Liliquoi Blue: God made me a boy’ (2011) Qasim Riza Shaheen and It has no name (2013) a live art performance, group exhibition and seminar for DIT Broadcast Gallery. www.firestation.ie

Catherine Conlon is Assistant Professor in Social Policy at the School of Social Work and Social Policy, Trin- ity College Dublin. Her principal areas of interest are: gender, sexuality and the fertile body; intergenerational relations and sexual socialisation. She is a member of the Creative Arts Practice research theme in Trinity College through which she forged a collaboration with Dr Evangelia Rigaki, School of Music TCD to translate her doctoral research on women concealing pregnancy into an Opera performance entitled ‘Pregnant Box’ staged in TCD in September 2014.

Anthony Haughey is an artist and a lecturer in the Dublin Institute of Technology where he supervises doc- toral practice-based projects. He was Senior Research Fellow (2005-8) at the Interface Centre for Research in Art, Technologies and Design in the University of Ulster Belfast, where he completed a PhD in 2009. His work has been widey exhibited, published and collected nationally and internationally, most recently Uncovering History, Kuunsthaus Graz, Excavation, Limerick City Gallery, MakingHistory and Colombo Art Biennale (2014). Since 2007 he has worked with the Global Migration Research Network—a group of diverse individ- uals who came to live in Ireland (north and south) during the economic boom. Exploring often contentious issues relating to citizenship and contested spaces, the group has worked together and individually with the artist over the last eight-years in Malta, North Africa, and Ireland. Together they have produced a number of dialogical art projects: installations, exhibitions, video works, television broadcasts and intercultural public discussions. Symposium respondents also include collaborators and founding members of the Global Migra- tion Research Network Lauretta Igbosonu (Communications specialist and performer) and Warsame Ali Garaare (a UCD law graduate). www.anthonyhaughey.com

Jesse Jones is a Dublin based artist. She studied Sculpture at NCAD. Her films and videos explore historical gestures of communal culture through processes of disruption and ambiguity which may hold resonance in our current, social and political landscape. Drawing from the archival research she has recently developed works with transcripts of encounter therapy groups from the late sixties and early seventies. Using these as scripts to be performed by actors as verbatim theatre, the script becomes a dramatisation of the moment of origin rather than re-enactment. Seeing group therapy as script reveal the interpersonal exchanges and tex tures of gender, sexuality, race and class as the fabric of social construction itself. Recent solo exhibitions include ‘The Other North’, Artsonje Centre, Seoul and The Centre for Contemporary Art, Derry~Londonderry (2013); ‘Sleepwalkers’, The Hugh Lane Gallery, Dublin, (2012); ‘The Struggle Against Ourselves’, Spike Island, Bristol (2012) and REDCAT, Los Angeles (2011); group exhibitions in 2014: ‘Otherwise’, Alternativa Festival WYSPA, Gdansk, Poland; ‘Invisible Violence’, Museum of Contemporary Art, Belgrade and ARTIUM Basque Country; ‘The Talking Cure’, Oakville Galleries, Toronto and IMA Brisbane, Australia. New commission, with Sarah Browne: ‘In the Shadow of the State’ www.create- ireland.ie/current-press/major-new-collaborative-commission-for-2016

Glenn Loughran is an artist and educator living in Dublin, Ireland. Born in Belfast, N.Ireland Loughran has studied Art and Design at The Ulster University (1991) and Dun Laoghaire College of Art Design Technology (2002). He went on to complete a B.A in Fine Art Painting (2003) and an M.A in Sculpture at NCAD (2005), completing his doctorate at the National College of Art and Design and the Graduate School Of Creative Arts and Media (GradCAM) 2012. Working at the intersection between Participatory art and pedagogical processes he has exhibited Nationally and Internationally. He is a Lecturer in Fine Art at the Dublin School of Creative Arts (DIT), Coordinator of the B.A.V.A on Sherkin Island, and guest lecturer on the M.A in Socially Engaged Art and Further Adult and Community Education (NCAD).

Anne Mulhall is a lecturer in the School of English, Drama and Film at UCD. She teaches and researchers in gender, queer and sexuality studies and is involved in migrant justice activism. She has published widely on queer, feminist, psychoanalytic theory, biopolitics/necropolitics in contemporary Ireland, and gender, sexuality, and migration in Irish literature and culture. She is currently working on a booklength analysis of bio/necropolitics in Ireland from EEC accession to the present, ‘Intimate States: the biopolitics of ‘Ireland’.

Event is free but registration required you may register here